FlyOver Canada, one of Vancouver’s hottest attractions, welcomed its one millionth rider on September 5 since opening its doors on June 29, 2013.

The unsuspecting lucky rider was Saskatoon’s Nimrat Ghuman, who was awarded a grand prize of a two-day trip for two aboard the luxurious Rocky Mountaineer train in the SilverLeaf cabin, plus a ton of FlyOver Canada swag – a total prize package worth over $3,400.

“We continue to be overwhelmed with the positive response of our guests, both tourists and locals, and are pleased to be able to say thank you and recognize this milestone with our fans and supporters,” said Andrew Strang, CEO of Soaring Attractions and co-founder of FlyOver® Canada. 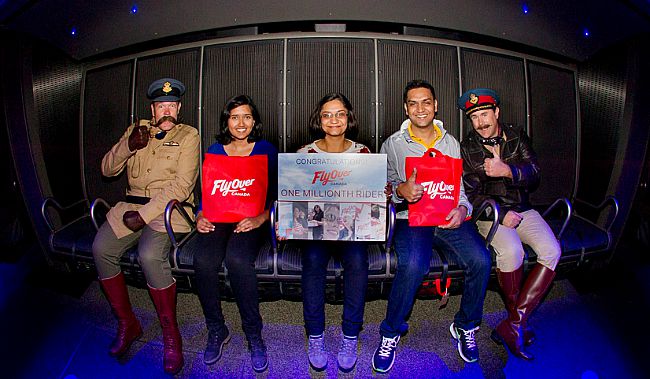 When Ghuman presented her one millionth rider admission ticket to the Flight Guide, the event was marked with great fanfare and included confetti cannons, music and vintage pilots on site for the celebration. All guests on the ride at the time also received a complimentary ticket to return to FlyOver Canada, an Official Commemorative FlyOver Canada Souvenir Guide and aviation themed chocolates to mark the momentous occasion.

FlyOver Canada is open year round at Canada Place. For more information and to acquire admission passes online, visit flyovercanada.com.