Vancouver’s FlyOver Canada has been in the business of entertaining tourists and locals since Summer 2013, and they’ve got no plans of slowing down. The virtual flying experience that takes passengers on an aerial trip across the country gave Vancity Buzz a behind-the-scenes tour and we learned a lot about the young company.

FlyOver Canada opened on June 29, 2013, after years of work by Vancouver entrepreneurs Stephen Geddes and Andrew Strang and the Aquilini Investment Group. The family-friendly 30-minute attraction has since seen over 600,000 visitors at it’s Canada Place home.

If you haven’t yet visited FlyOver Canada, you might be familiar with the concept from Disney California Adventure’s “Soarin’ over California” ride. Like the popular Californian attraction, FlyOver Canada immerses passengers with wind, mist and scents, giving them the feeling that they are really flying, while in fact they are strapped in and suspended in the air in specialized ride vehicles. 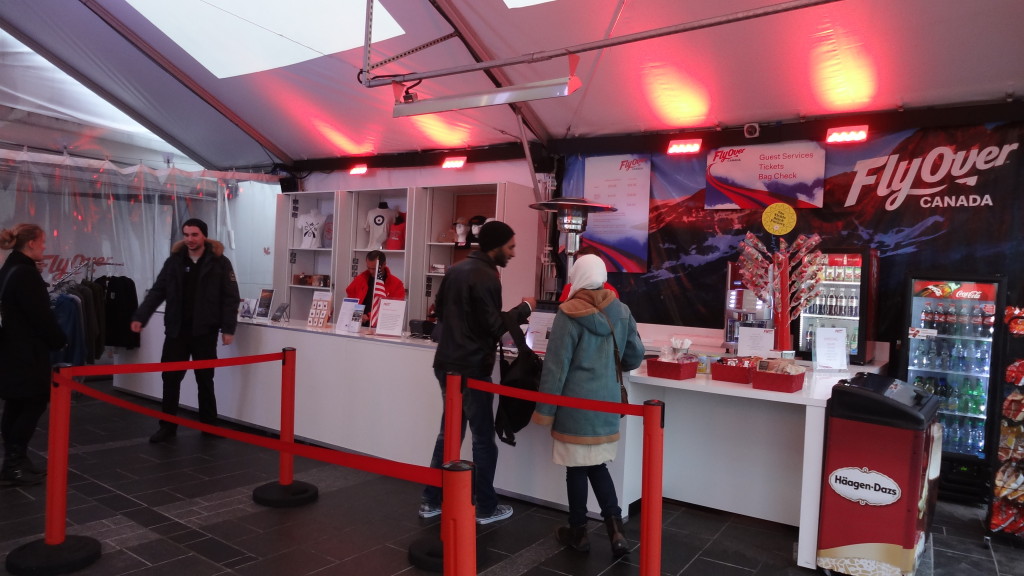 The patriotic entrance to FlyOver Canada.

Unlike “Soarin’ over California,” FlyOver Canada plans to give their audience unique experiences throughout the year, such as adding on additional flying films like Above USA and special holiday-themed experiences. Beginning December 5, the attraction will include an extended animated film over Santa’s magical North Pole and Christmas decorations, holiday music and more festivities. 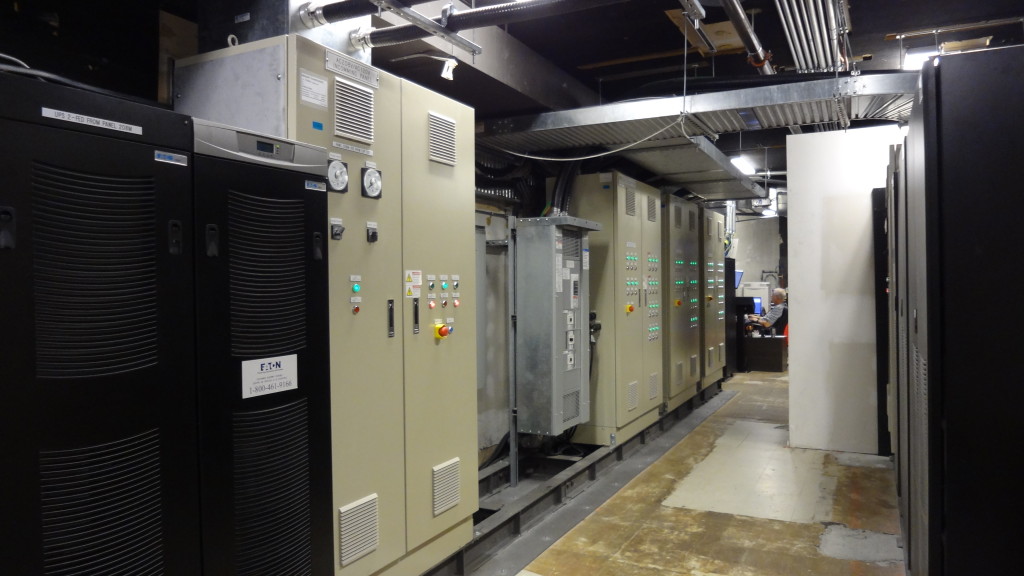 Behind the screens. These machines keep everything working. Don’t touch that button!

President of Soaring Attractions, Stephen Geddes sat down with us to shed some light on where FlyOver Canada is going.

“[Our biggest challenge right now] is making sure the locals know there are always different things going on,” Geddes stressed. Because FlyOver Canada is a stand-alone ride, unlike its Disney counterparts, the local fan-base is something Geddes and his team are working hard to engage.

Some of their big ideas at the moment include the creation of a B.C.-only film, their own U.S. production (the current Above USA film is licensed from a Chinese company), a filmmaker competition to be screened as part of the ride and an update to the original FlyOver film in 2017. 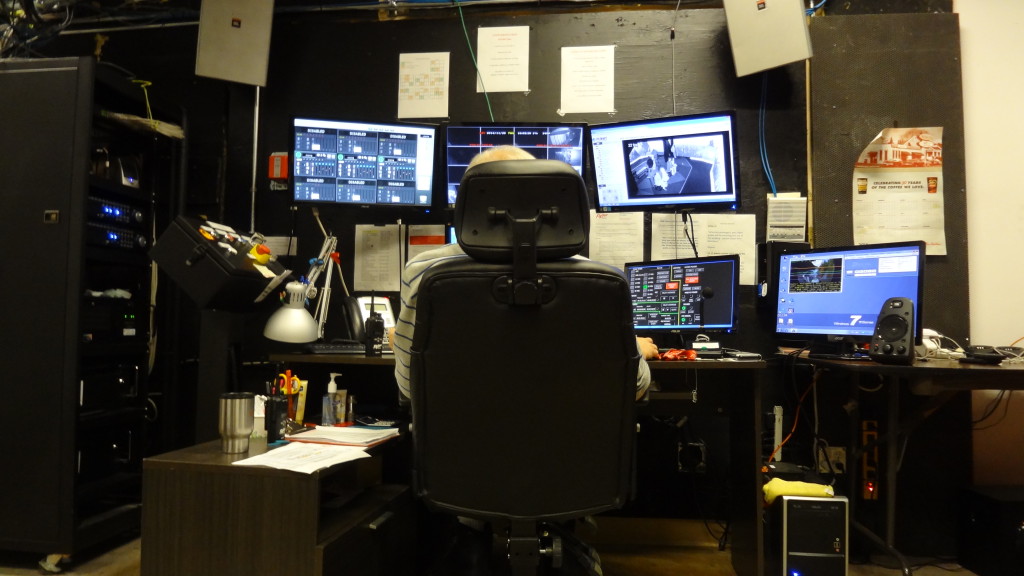 Al runs the control room and monitors the status of every ride and passenger.

Whether or not they have the attention of the locals, FlyOver Canada has been nothing but popular since it’s initial opening. On a busy day, the production runs upwards of 60 times in a 12 hour stretch, with line ups outside the door. The attraction is lauded around the world as well. Geddes told us a story of how four people from Disney came and rode the ride nine times in a row.

They are expecting the Christmas season to be another big hit, especially with Christmas at Canada Place happening just outside. The attraction will run daily beginning December 5 from 10 a.m. to 9 p.m. and festivities will include hot drinks, food, music, lights and more. 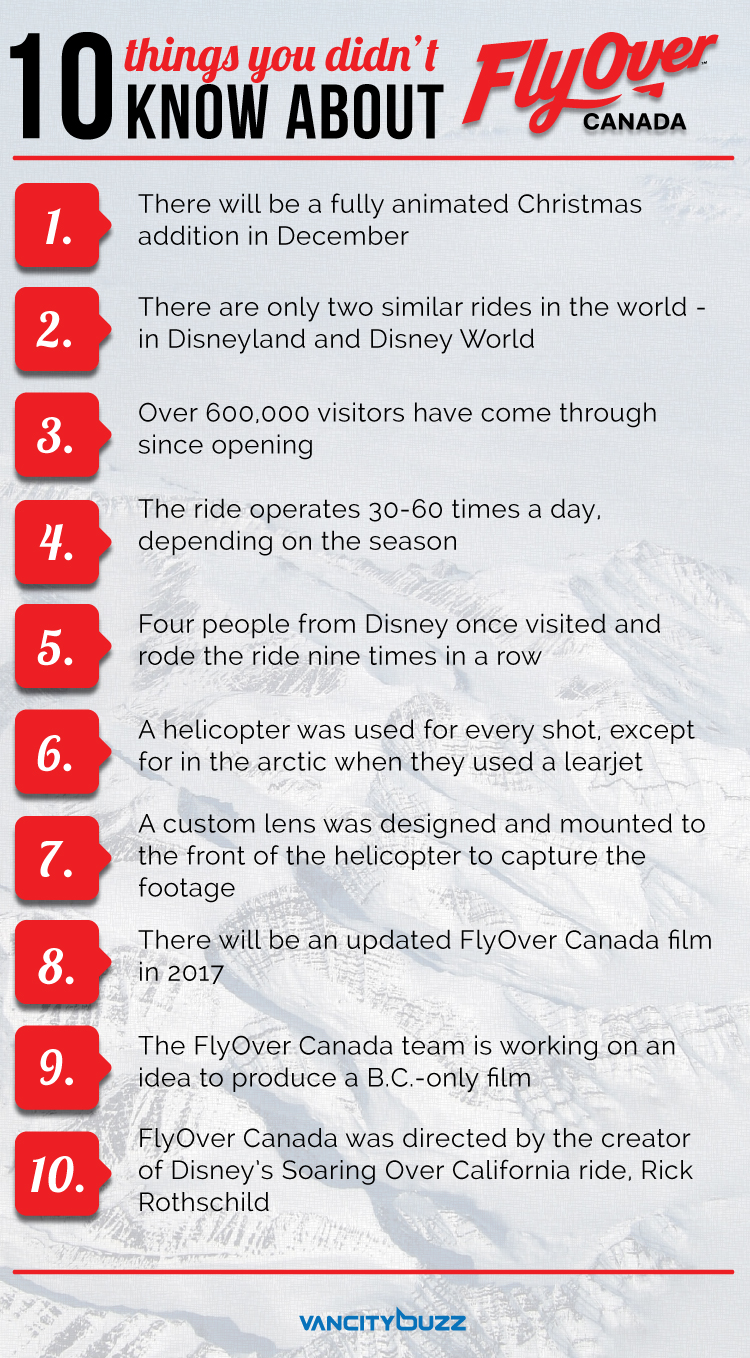