The series premiere episode of CW’s highly anticipated superhero drama, The Flash, hits the ground running and is a great introduction to the beloved DC Comics character, even if it is limited by some of the hiccups that have traditionally anchored pilot episodes.

One of the most exciting features of The Flash is that it takes on people with actual superhero abilities, as opposed to brooding vigilantes or characters with futuristic technology. Previously introduced via a very well received backdoor pilot in parent-series Arrow, The Flash refreshingly does not rehash that episode, but rather gives us a second look at forensic scientist Barry Allen’s origin story – which bares striking resemblance to the critically acclaimed first arc of the DC Comics New-52 relaunched The Flash title, by Brian Buccellato and Canadian artist Francis Manapul.

Grant Gustin’s Barry Allen is definitely a young man driven by the horrific tragedy of his past, as are many heroes, but unlike fellow Justice Leaguers such as Oliver Queen or Bruce Wayne, his past does not torment or define him. He rises above that, and that lighter touch is a welcome relief when considering this series follows in the footsteps of a decade filled with the dark Nolan Batman trilogy, the violent Man of Steel, and the brooding Arrow.

Gustin is particularly likeable and charming on screen as the earnest superhero, bearing good comedic timing, and brings a certain sense of naive wonder and awe to the character, which almost seems more fitting for Wally West, a notable fellow speedster to bear the crimson tights, rather than Barry Allen, but that is presumably by design. 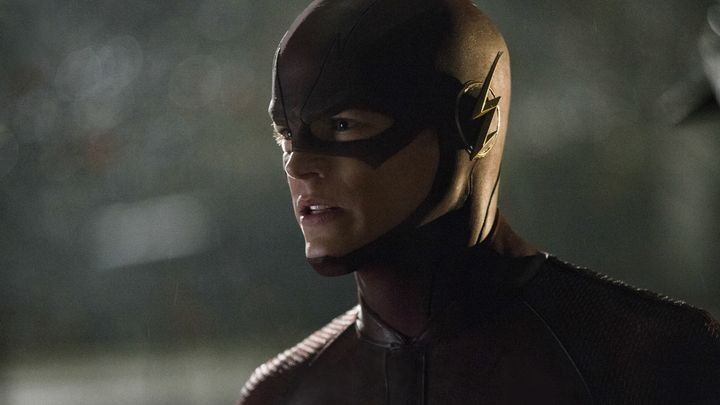 Over the extensive 42 minutes of the pilot, we are re-introduced to Allen, his workplace and co-workers, and get a complete Flash origin story, from lightning bolt to power discovery to costume. One of the big fears going in was that the speed force and the very action of Flash running at lightning fast speeds would not translate well, especially with the limited budget of a TV series, but even in the infancy stages of this show it looks terrific on screen and in motion. One can only imagine what could be achieved with the budget of a feature film – wink wink Justice League.

As noted, The Flash pilot packs a lot into its limited screen time, but that’s also where it falters. Due to the necessity of setting up so much of the world, during numerous instances certain character beats hit quite heavily, with interactions becoming little more than two people explaining who they are to each other. This is a growing pain that unfortunately simply has to be survived for now, but it should not be an issue once the series starts gaining momentum in the fall.

Experienced director David Nutter, who also directed the pilot for Arrow, efficiently tells the first story, makes the proper introductions, and makes sure to put together enough impressive set pieces to get us all excited for what is to come.

Make no mistake, this is a show that fans are definitely going to welcome, as those involved seem to really understand the character and the world he operates in, and embrace his comic book roots. Easter eggs are plentiful, many coming in the form of characters, and even some from unexpected sources such the Batman and Green Lantern universes respectively. In a nice coincidence, John Wesley Shipp who plays Henry Allen, Barry’s father, also played Barry Allen himself in the 1990 The Flash series.

One of the greatest assets the The Flash has going for itself is its legendary gallery of villains – known as one of the best in all of comics. With names such as Captain Cold, Mirror Master and Heatwave, one might expect nothing more than the campiness of the Adam West era Batman series, however that would be a big mistake. Few villains are as well flushed out and unique as those that aim to foil the scarlet speedster. Maintaining a code of conduct and high standards for acceptance, the Rogues have distanced themselves from their counterparts and become long time fan favourites.

Early on in the episode, we are led through various moments and set pieces of Barry Allen’s life by an apparent monologue he is making, but it eventually turns out to be a story he is telling – to a not entirely unexpected character making a cameo appearance – and in short summarizing who he is to become. The pilot episode of The Flash sets out to do just that for itself as well, and accomplishes that in strides, leaving us to expect many promising things to come in the fall.