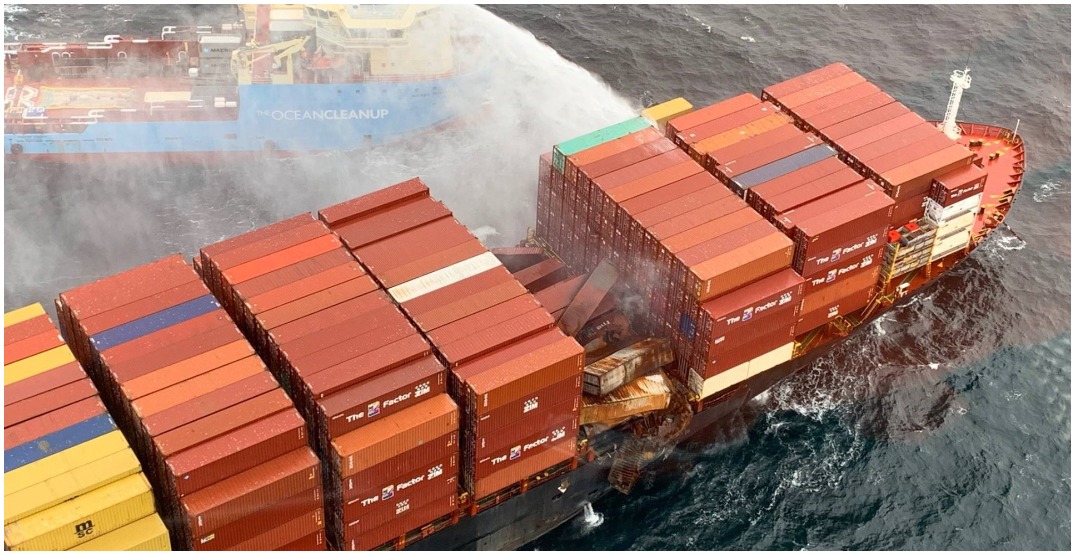 Several days after dozens of containers went overboard and a fire broke out onboard the Zim Kingston, the Canadian Coast Guard says crews still haven’t been able to board the ship.

“High winds and a large ground swell continue to prevent salvage crews from boarding the ship. However there may be a weather window later this evening,” the Coast Guard said in a tweet.

Earlier today, there was an overflight that showed smouldering but no visible flames in the containers.

#CCGLive – A Coast Guard overflight of the #ZimKingston at 11:30 today shows smoldering but no visible flames in the containers. However, firefighters may find some active fire in the containers once they are able to board the ship. pic.twitter.com/PHjfjf6Fg7

The Coast Guard says Incident Command is working with the owner of the Zim Kingston to identify which containers have gone overboard, but the current storm is hindering recovery efforts.

The containers are being monitored and tracked so action can be taken when the storm eases.

About 40 containers went overboard on Friday from the Maltese-flagged ship, which had been en route to Vancouver from South Korea when it listed to one side, the US Coast Guard said.

On Saturday, October 23, a fire was reported on the ship, which is anchored about eight kilometres off the coast of Victoria.

Emergency tow vessels, tugs and CCG monitor the ship overnight to ensure the five crew members on the ship are safe, and that the ship remains secured. Further updates will be provided tomorrow. pic.twitter.com/ouRYgt0J12