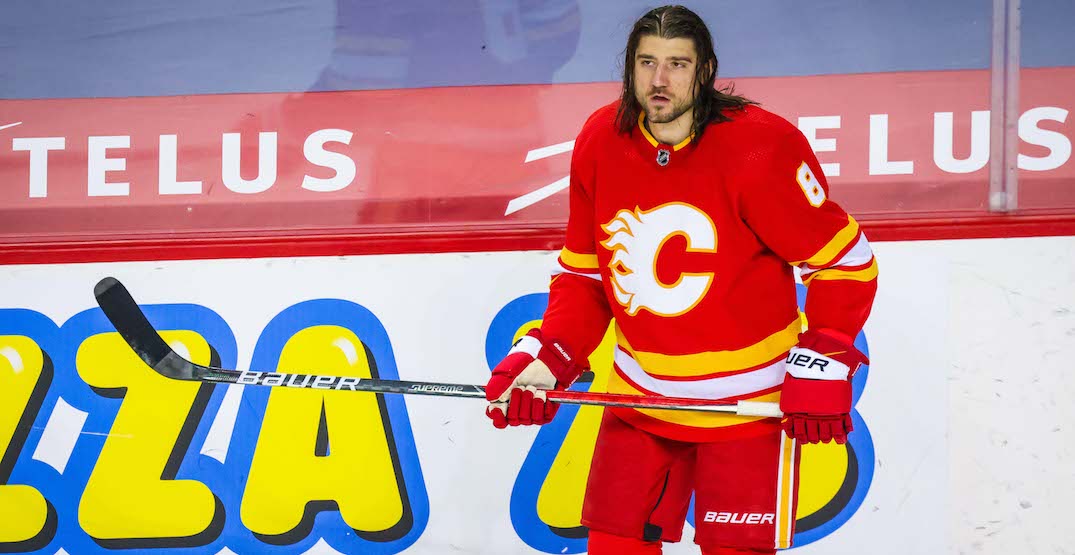 Chris Tanev is a warrior.

The veteran blueliner is as tough as they come, fearlessly blocking shots and taking hits with regularity, to help his team win.

In his first season in Calgary, the 31-year-old finished second on the Flames in ice time (21:44) and blocked shots (107) to captain Mark Giordano. Making it even more impressive was the fact Tanev did it while playing through a pair of significant injuries.

During his year-end media availability, Flames GM Brad Treliving revealed that Tanev played with “a couple” of broken ribs and a torn pectoral muscle, suffered on a hit by Winnipeg Jets forward Pierre-Luc Dubois on March 29.

“I think he missed a practice [and that’s it],” said Treliving. “That tells you a little bit about Chris Tanev.”

Tanev didn’t miss a single game this season, something he only accomplished once during his 10 years with the Vancouver Canucks, due to injuries. It would have been easy to sit out a game too, given the final week of the season was filled with meaningless games.

“I don’t know if I’ve ever seen a player play through what this guy played through this year for a period of time of about a month,” Treliving added. “He played till the end and he wasn’t going to come out.”

Not much went right for the Flames this season, but Tanev was part of the solution.

“I was really impressed with Chris. He’s a consummate pro… He’s just a real stabilizer, he makes those around him better. A lot of his game’s underrated. We talked about how well he defends, but he moves well, he gets you out of his end with his puck ability.”

Tanev had 12 points this season, all scored at even strength, which tied him with Noah Hanifin for third among Flames blueliners in that category. He also ranked first among Flames defencemen in Corsi-for percentage, which is a testament to his overall game.

“You talk about the culture of winning and what it takes to win, this guy puts it on the line and we’re lucky to have him.”