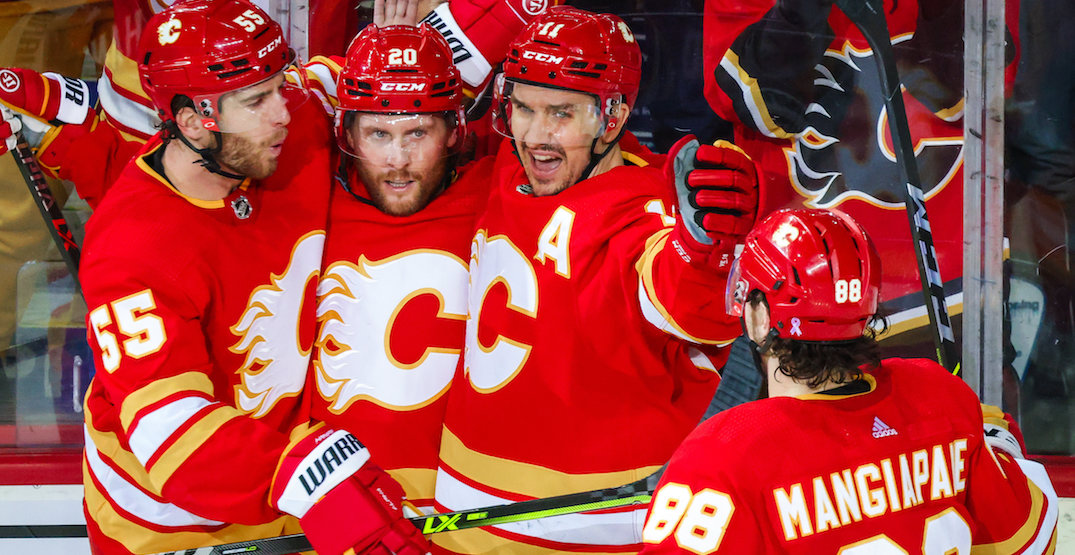 During one of the most thrilling Stanley Cup Playoff games in recent memory, the Calgary Flames emerged victorious in a dramatic 9-6 victory over the Edmonton Oilers in Game 1 of their second round series.

It was the highest-scoring playoff game ever in Battle of Alberta history.

The Flames scored twice in the first 51 seconds of the contest, led 6-2 in the second period, blew a four-goal lead, but nonetheless hung on for the win.

The 15 combined goals in this game were the most in playoff history between these two teams.

Previously the record for goals in a playoff game between these two teams was 12. That was back in 1983 when the Oilers spanked the Flames 10-2 in a Smythe Division Finals matchup.

Wayne Gretzky had four goals and three assists that night.

After shutting out the Los Angeles Kings 2-0 in a Game 7 victory, Smith was pulled after allowing three goals on 10 shots.

Elias Lindholm opened the scoring for Calgary 26 seconds in.

Andrew Mangiapane and Brett Ritchie scored to make it 3-0 just 6:05 into the game before Smith got the hook.

McDavid then scored the Oilers’ first goal to end the opening period.

A little patience from 97 pays off to get us on the board. #LetsGoOilers pic.twitter.com/5A52VL8nJi

However, two goals from Coleman early in the second period put the Flames up 5-1.

THE POWER OF PICKLES! pic.twitter.com/xFFLRxSNGY

Evan Bouchard got the comeback started after a sick feed from McDavid.

Tkachuk scored a power play goal to make it 6-2 Flames, but two goals from Zach Hyman and another from Draisaitl cut the lead down to 6-5 Flames heading into the second period.

Kailer Yamamoto completed the improbable comeback 1:28 into the third period, scoring to tie the game 6-6.

With Calgary on the verge of a massive collapse, Flames defenceman Rasmus Andersson scored what was eventually the game-winner.

Tkachuk added two more including an empty netter, to seal the insane 9-6 victory.

The Tkachuk clan, including Matthew’s brother Brady, were in the crowd cheering him on.

Brady is a whole vibe 🔥 pic.twitter.com/zayHMKlMzk

Despite Matthew registering his first career playoff hat trick, his father, legendary NHLer Keith Tkachuk, refused to throw his hat onto the ice.

Matt Tkachuk chirps Evander Kane about his bankruptcy. "You want some money?" pic.twitter.com/IMOjyzaziO

The Flames also had help in the stands from another legend, former captain Lanny McDonald.

Despite the victory, the Flames were less than thrilled about how things played out.

“We played, probably, the worst 15-20 minutes of hockey we have all year.,” Tkachuk told reporters after the game.

Coleman tried to make the most of the wild affair.

“A lot of inexperienced teams would crumble right then and there, but that was not our team tonight,” Coleman said during his post-game press conference.

“Amongst the chaos, I really thought we had some composure in the third, and we found a way to get it done.