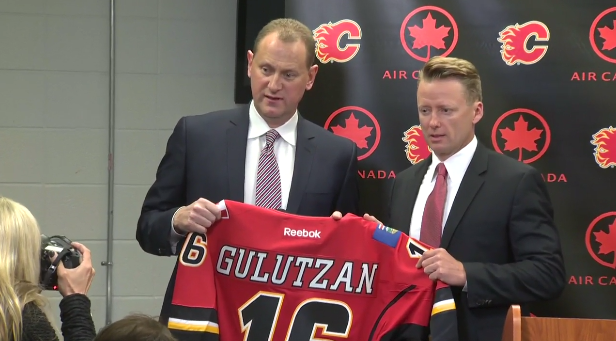 After many rumours, the Canucks have lost assistant coach Glen Gulutzan to the Calgary Flames.

The Flames officially announced 44-year-old Glen Gulutzan as the team’s next head coach on Friday morning.

Since Hartley’s firing, there had been tons of speculation on who the next coach would be, and much of that talk involved Gulutzan.

Some other notes from Headlines: don't be surprised if CAL interviews VAN assistant Glen Gulutzan. He and Brad Treliving both played…

Keep hearing that #Canucks asst Glen Gulutzan is a finalist for the #Flames head coaching gig. Has interviewed at least twice.

Interesting to note Gulutzan and Brad Treliving have crossed paths before. Only 1 year separated them as Brandon Wheat Kings in late 80's

Carlyle's return to Anaheim leaves the Calgary Flames the line coach-less club. Gulutzan believed to be front runner. Nothing firm yet.

Gulutzan has spent the past three seasons as an assistant coach with the Canucks. He was first hired by Mike Gillis to be John Tortorella’s assistant in 2013. When the coaching staff was fired, Gulutzan was the only one to keep his job. Prior to that, he was head coach of the Dallas Stars from 2011-13, accumulating a record of 64-57-9 in his two seasons, though never qualifying for the playoffs.

With the Canucks, Gulutzan ran the penalty kill unit that was a consistent bright spot for the team. That should help a Flames squad that had a league-worst 75.5% PK rate last year.

Gulutzan is expected to work well with the Flames’ young players.

One concerning pattern with the teams Gulutzan has been involved with has been a consistent negative shot differential.

Of course, there are a number of factors that play into those results (rosters, other coaches, luck, etc.) and it’d be unfair to pin all the blame on Gulutzan.

Calgary’s defensive core of Mark Giordano, TJ Brodie, and Dougie Hamilton is much stronger than what Gulutzan had to work with in Vancouver or Dallas, so it will be interesting to see how he does.

It’s interesting to note that Travis Green, the head coach of the Canucks’ farm team in Utica who received most of the publicity going into the offseason, looks like he will be the odd man out. He could be moved into Gulutzan’s old role as assistant with the Canucks, but more likely he will  remain in Utica. He’s still expected to be the heir apparent, if someone else doesn’t snatch him up first.