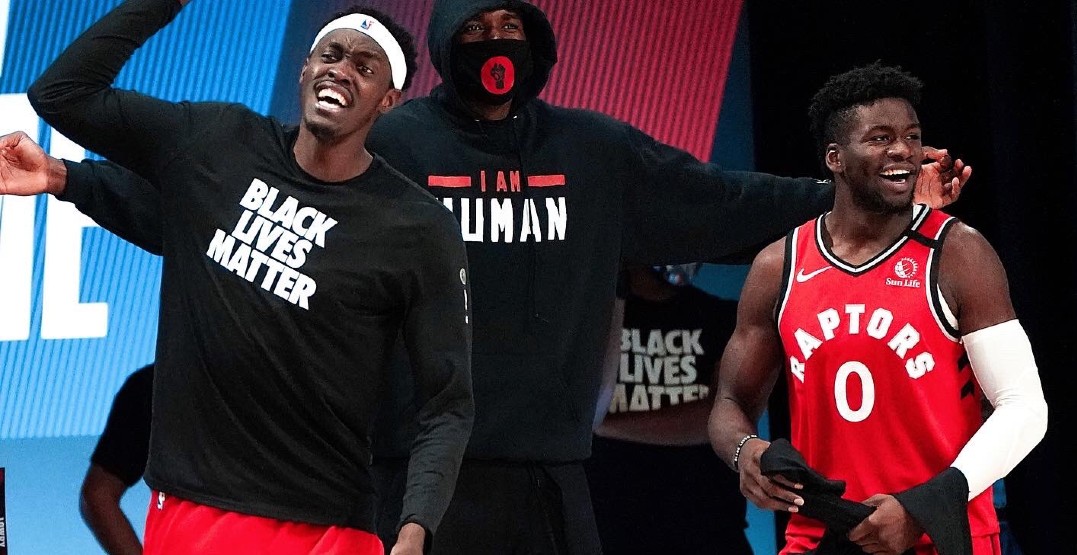 And here we are.

Just over a year after the Toronto Raptors’ miraculous run through the playoffs in 2019, the defending champs are officially set to begin their title defence today.

Toronto will draw the number seven-seeded Brooklyn Nets in an Eastern Conference first-round series — a team that delivered one of the more memorable first-round series in the recent memory of Raptors fans. Game 1 is set to tip-off today at 4 pm ET/1 pm PT.

The last time these two teams squared off in the postseason was in 2014. That series delivered us Masai Ujiri’s infamous “F— Brooklyn” quote, a picture of former head coach Dwane Casey riding the subway to the arena and ultimately Kyle Lowry’s heartbreaking miss at the buzzer in Game 7.

That series also marked the launch of a campaign that forever changed the lifeblood and DNA of the Toronto franchise: We The North.

Although many things have changed for both teams since 2014, that DNA, that foundation and that heart that cemented itself for Toronto six years ago have remained.

The Raptors enter the 2020 series as one of the hottest teams in the NBA. They have put on a show in the NBA bubble so far, going 7-1 in the seeding games and showing very little rust.

Their strong performance resulted in the Raptors finishing the season with the greatest winning percentage in franchise history, going 53-19 (.736) on the year. It also marks the seventh straight postseason appearance for the club, they’re fifth consecutive 50-win season, and the 24th consecutive month that the team has mustered a winning record.

Brooklyn, on the other hand, hasn’t won a postseason series since they faced Toronto back in 2014 and finishing this season with a 35-37 record. The Nets unexpectedly did show some signs of life in the bubble, however, finishing 5-3 to secure their playoff berth.

With the Raptors entering the series as heavy favourites, here are five things to watch for as they prepare to battle Brooklyn down in Orlando, Florida.

1. Can the Raptors slow down… Caris LeVert?

It was a night to remember for @CarisLeVert.

The Nets team that travelled down to Orlando is a much different roster than what it looked like on paper to start the regular season. Superstars Kevin Durant and Kyrie Irving remain on the team’s injured list, while impact players DeAndre Jordan, Spencer Dinwiddie, and Wilson Chandler all opted out of playing in the bubble amid the pandemic.

This has opened the door for guys to step up in the absence of star power and the player leading the way is Caris LeVert.

The bubble served as a showcase for LeVert, who cemented himself as the team’s number one option. He averaged 25 points through six seeding games to go along with 6.7 assists and five rebounds. LeVert will be the focal point of Brooklyn’s offence as a guy who can get to the rim and create shots for teammates.

He’s even caught the attention of Raptors’ head coach Nick Nurse who called him “outstanding.”

If Brooklyn wants any chance of overcoming a superior Toronto team, LeVert will have to have a huge series and it will be up to the Raptors’ hard-nosed defence to shut him down.

2. Can Brooklyn do anything about the Raptors’ stifling defence?

One silver lining to having the NBA season paused back in March is that it allowed Toronto to finally get healthy. With a healthy roster playing in the bubble, we’ve been able to see the Raptors unleash a suffocating defence that has been giving teams headaches. The Raptors are long, fast, skilled, have the size, and are extremely gritty.

In the bubble, the team posted a league-best defensive rating at 102.7, proving they could shut down the best players on opposing teams at will.

Add in Nick Nurse, who is willing to deploy various defensive schemes over the course of a game, and it can be extremely hard to score on these Raps.

The Nets will not go down without a fight and shouldn’t be overlooked by any means based on their bubble performance so far, however, if Toronto’s defence is at it’s best, you’ve got to like their chances of finishing this one in four or five games.

3. Will the Raptors’ Game 1 demons return?

In 25 years, the Raptors have as many NBA championships as they do Round 1 Game 1 wins.

Raptors fans can remember all-too-vividly the Game 1 demons that still haunt the franchise to this day. The baffling streak of Game 1 losses in a playoff series totalled 10 in a row and spanned over nearly two decades. The Raptors have since been able to shake the curse, however, last year those demons reared their ugly head in Game 1 of the team’s first-round series against Orlando.

Some might even remember star guard Kyle Lowry scoring 0 points in that contest — a stat line that sent Raps fans and media into pandemonium.

Now after winning a championship, that opening loss to the Magic hasn’t lingered for too long, but Brooklyn might be poised to catch Toronto off-guard.

The Nets are relishing the underdog role as they come into the series with a chip on their shoulder.

“We have a lot of pride and professionalism in this locker room. A lot of guys are overlooked and took it personally. We were supposed to go 0-8,” LeVert told media prior to Game 1.

Toronto has put up some pretty ugly shooting displays in previous Game 1’s and sometimes it is clear that the pressure got to certain players. With a neutral gym and the swagger of a champion on their side, it could very well be a different story.

4. How will no home-court advantage impact the series?

While several other of the top-contending teams have shown rust amid the NBA restart, the Raptors have looked like a well-oiled machine. Although some guys may have struggled to get into a gym during the shutdown in North America, others appear to be struggling with the unique, neutral setting where these bubble games are taking place.

Superstar LeBron James has even commented about the challenges of playing in a gym with no fans and minimal atmosphere.

Toronto worked hard to secure the second seed in the Eastern Conference, trailing only the Milwaukee Bucks, but the question is, will that matter?

“We just miss the fans in general. Our fans in Toronto are the best fans in the NBA, I truly believe that. So that will be missed, Jurassic Park, and all that,” Lowry told TSN’s Josh Lewenberg.

Scotiabank Arena has proven to be a difficult place to play in the past few years, boasting some of the loudest fans in the Association.

“As far as going into Toronto, you know what to expect,” Nets guard Tyler Johnson said ahead of the series. “But then again, there’s no home-court advantage. You play a basketball team in the same spot for however many games it takes to advance.

Now Raptors fans don’t want to get ahead of themselves and look beyond a potentially feisty Brooklyn team, but this question might be more of a factor if the team advances beyond the first round.

With Kawhi Leonard out of the picture this year, the Raptors don’t seemingly have that bonafide number one option. All year long, this team has utilized a ‘scoring by committee’ approach, where they have at least seven players capable of leading the team in points on any given night.

This offensive consistency up and down the roster has proven successful so far but without Leonard, the question mark heading into this series with Brooklyn becomes who will be the closer down the stretch in big-time moments?

Pascal Siakam took major strides this season, earning himself an All-Star nod, however, critics have been skeptical if he can be “the guy” amid this restart.

When the going gets tough, teams usually have the one star that they can rely on to bail them out, but the Raptors have had a multitude of players fill the role of hero at various times throughout the year.

While scoring by committee can carry you a certain amount of the way, will that become an issue for the Raptors when they need a leader to step up? Last year in Game 7 against Philadelphia, the whole world knew Kawhi was going to get the ball on that last play — and we all know how that ended. Who is taking that shot this year?