The first wave of puppies and dogs seized from a Langley puppy mill will be available for adoption this week, but the BC SPCA is requiring potential pet parents to attend an information session before they can take them home.

A total of 66 dogs were removed from “filthy conditions” on the rural property last month, and 16 adult dogs and seven puppies have just been medically cleared to be placed in new homes.

The canines were raised with little human contact, which means some will face emotional hurdles, according to the BC SPCA.

“Many of these dogs have never been inside a home,” said the SPCA’s Lorie Chortyk. “People need to know they will require extra patience.”

Some dogs could be fearful, she says, adding that even some of the adult dogs may not be housebroken. Because they were allegedly kept in a dark and unheated barn, they could be under-socialized and may initially shy away from human contact, like being held.

“We just want people to know what they are signing up for,” said Chortyk.

The agency is holding three information sessions on Wednesday, and interested adopters must sign up on their website to pre-register for a spot. The sessions only hold 100 people each, and registration will be cut off after that. You cannot adopt a dog without attending one. 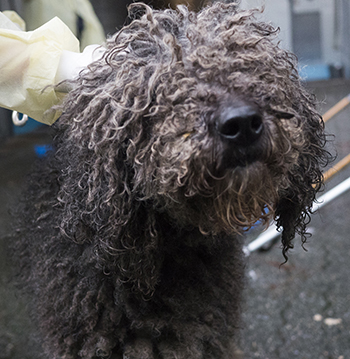 One of the matted dogs seized by the SPCA.

Chortyk says the sessions aren’t meant to be a barrier to prevent people from adopting, but rather to ensure the animals are placed in the right homes – and make sure the adoptions will be a success.

“These are great animals. The shelter staff is in love with each and every one of them,” she tells Vancity Buzz.

Because it has been inundated with thousands of phone calls and emails from people wanting to adopt these special animals, the SPCA is asking that potential adopters do not call the Vancouver shelter ahead of the sessions – so that it can focus on the ongoing care of the pups.

More dogs and puppies will be up for adoption in the upcoming weeks as they are deemed medically fit, says Chortyk. The Vancouver shelter is expected to be closed until mid-March. 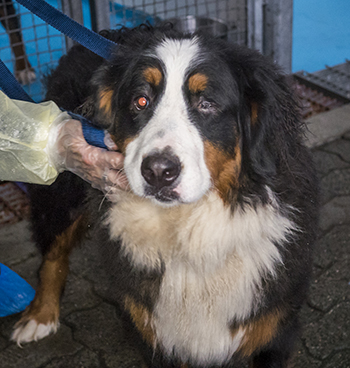 One of the pups seized from a Langley property in Feb. 4. (SPCA)