Cindy Sherman meets Dzunuk’wa, the Satellite Gallery’s current exhibition, is, to put it rather mildly, absolutely genius. Consisting of works by both international and Canadian artists, and juxtaposing both modern and more traditional First Nations art with contemporary western art, the exhibit not only exposes the differences between these two artistic worlds, but the similarities as well. But above all else, it manages to reflect the eclectic nature of Canada’s identity.

Two pieces in particular stood out to me. The first was Whytecliffe #10 by Gordon Smith, and for fans of the abstract it is a treat. Consisting of a seemingly infinite number of white lines and multiple colours subtly splashed throughout, this writer felt as if he was peering inside a brain that was brimming with creative energy. As I stared at the colours it felt as if the painting was giving off electric and chemical pulses, and I imagined myself as the artist, my consciousness streaming from my body onto the canvas. It is perhaps a little strange to think of a painting as being ‘stream of consciousness’, but there really is no other way to describe it.

The second piece was Old Growth Cedar #2, Seymour Reservoir by Rodney Graham. This piece is rather important to the exhibit as a whole, as it is representative of the difference between how the First Nations and the west view the universe. As westerners when we conceptualize the universe we traditionally start with the heavens, and view everything as filtering down from there, while many of the First Nations view the universe as beginning at the Earth’s soil, and expanding from there. It is an inverse view to what most of us are used to, but ultimately it is really not that different. In both cases the universe has a source (a starting point), and that source is to be respected.

Finally, how does this exhibit reflect the eclectic nature of this country’s identity? The answer is simple: much like the art on display, Canada is a mix of western and First Nations influences. And much like the exhibition, the result tends to lean towards brilliance. 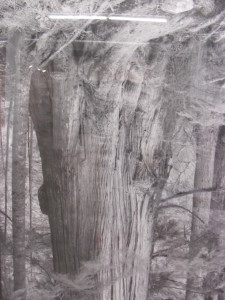