First Baptist Church on the northwest corner of Burrard and Nelson streets has partnered with Westbank Projects Corporation to revitalize the 1911-completed church building while also expanding the congregation’s outreach and initiatives within the local community. 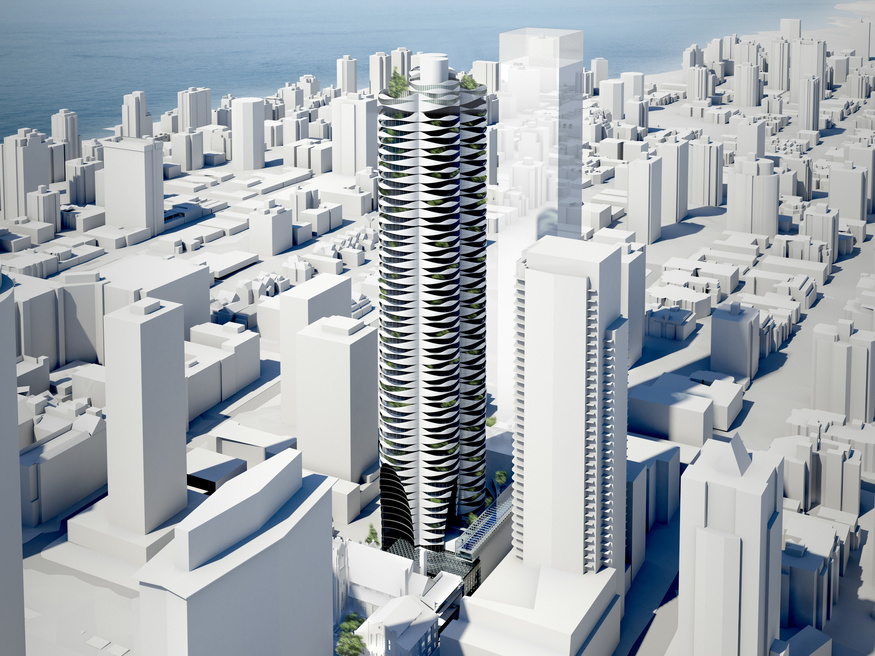 The 552,164-square-foot project will be built on the church’s ground level parking lot and consists of three main components: a 550-foot-tall, 56-storey tower with 295 market residential units within the upper floors and community amenities in the lower floors; a 70-foot-tall, 8-storey rental building with 75 ‘below market rate’ housing units, for older adults and seniors, owned and managed by the church; and a complete restoration and seismic upgrade of the existing historic church building.

The entire scope of the project’s new-build spans 552,164 square feet, with a floor-square-ratio of 10.88 FSR. The expanded church space would include a new childcare with 30 spaces and hub for the church’s associated volunteers and social services, such as Haro Park Centre Society and Kinbrace Refugee Housing.

A long two-lane swimming pool will be built into the third floor of the tower facing the adjacent Robert Lee YMCA building.

During an open house this week, BTA principal and architect Michael Heeney told Vancity Buzz the tower resembles four abstract organ pipes that slightly overlap on the inner edges. A ‘gap’ in the core of the building’s envelope reduces the building’s heating and cooling energy usage by 15 per cent and provides open communal spaces for residents in an effort to increase social interaction and reduce isolation. 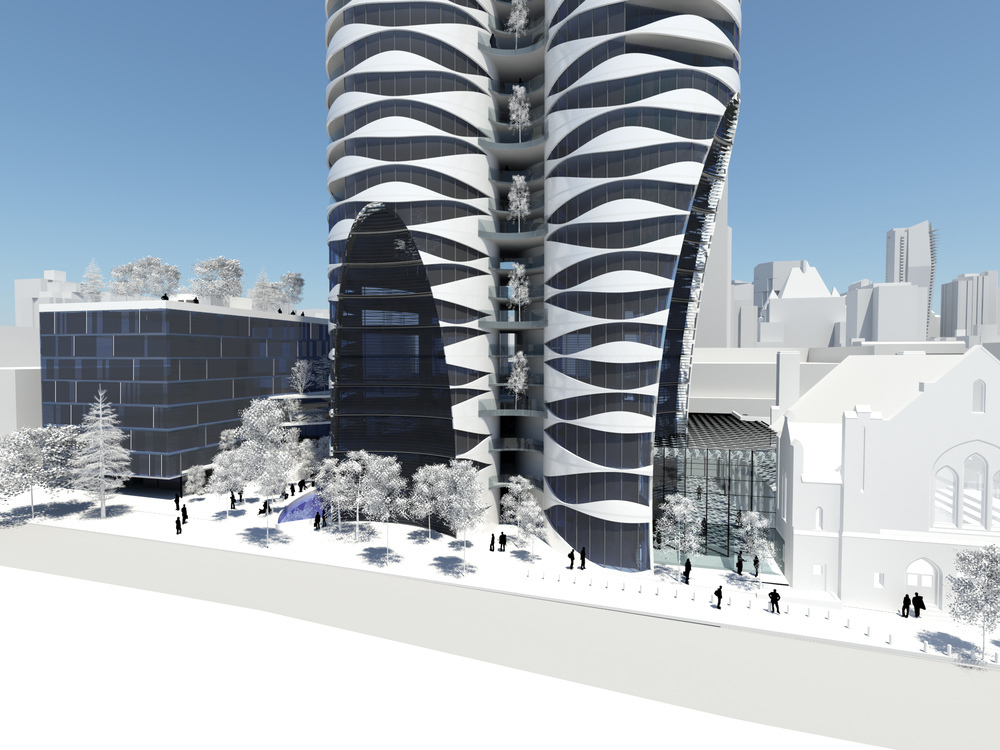 The facade of the tower is lined with dark contour-shaped windows and jutting balconies, providing a striking contrast against the dominating white base to provide the tower with an almost zebra-like appearance. Sky gardens are located every few floors and multi-storey egg-shaped deductions are ‘carved’ into the base of each pipe of the tower.

An outdoor plaza on the west side of the tower with a large cascading waterfall feature leads to a grand staircase entrance into the church’s new community and amenity space. The mid-rise rental building is positioned on the other side of the plaza, on the western end of the development site, and consists of a large rooftop amenity space for tenants.

The base of the eastern side of the tower and the exterior of the historic church will be ‘bridged’ by a fully glass-enclosed atrium gallery. 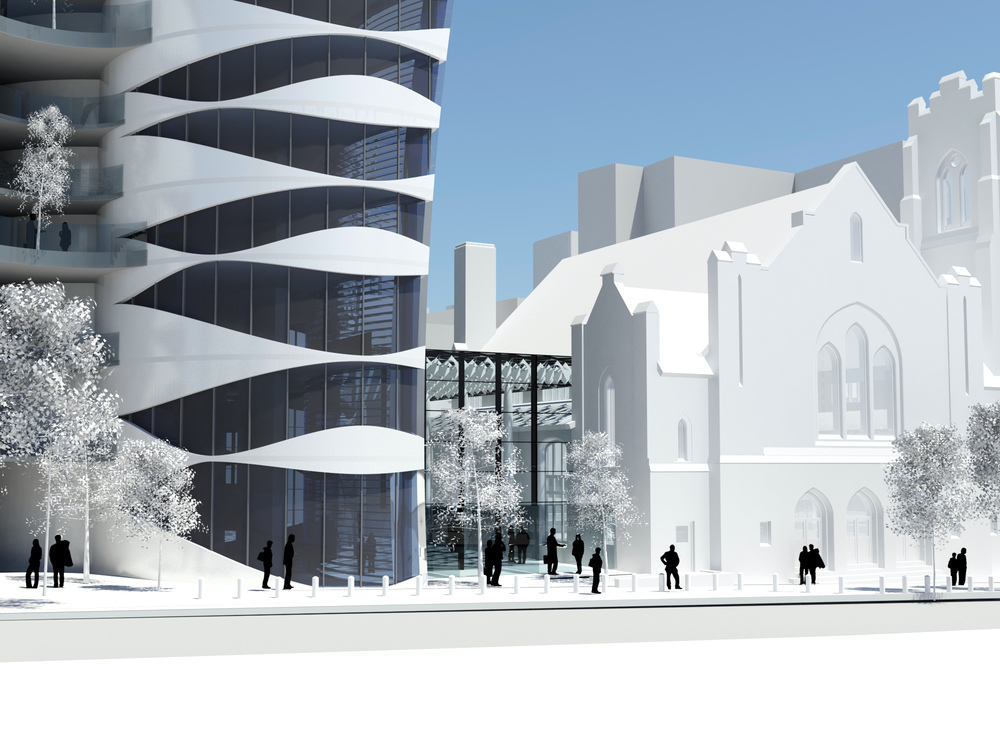 With the historic church building, it will be fully rehabilitated for the “continued landmark heritage use” by the congregation. This includes the restoration of the historic plaza, bell tower and chimes and church exterior.

Seismic upgrades will be performed and the Sanctuary’s masonry will be reinforced. As well, Pinder Hall will be restored to its original appearance and volume as it was altered in 1931 following a fire that gutted much of the structure.

The scope of the development falls within the Vancouver City Council-approved West End Community Plan and abides the View Cone Policy, to the extent that it will even “reinforce the dome shaped skyline” of the downtown peninsula.

More details will be released in the coming weeks when the project transitions into the official application and public consultation phase.

The 1000 block of Nelson Street, between Thurlow and Burrard streets, could experience a profound change if two major projects are approved and built over the coming years.

View of the First Baptist Church development from the southeast corner of Burrard and Nelson streets. 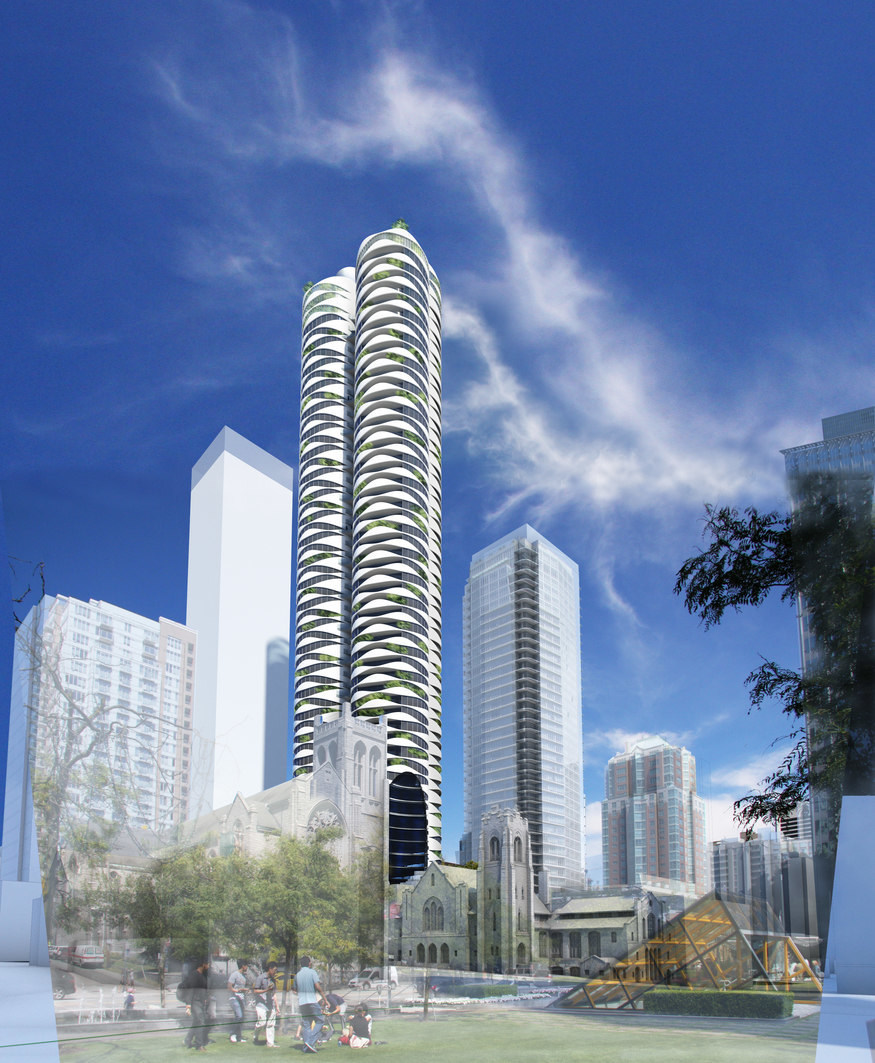 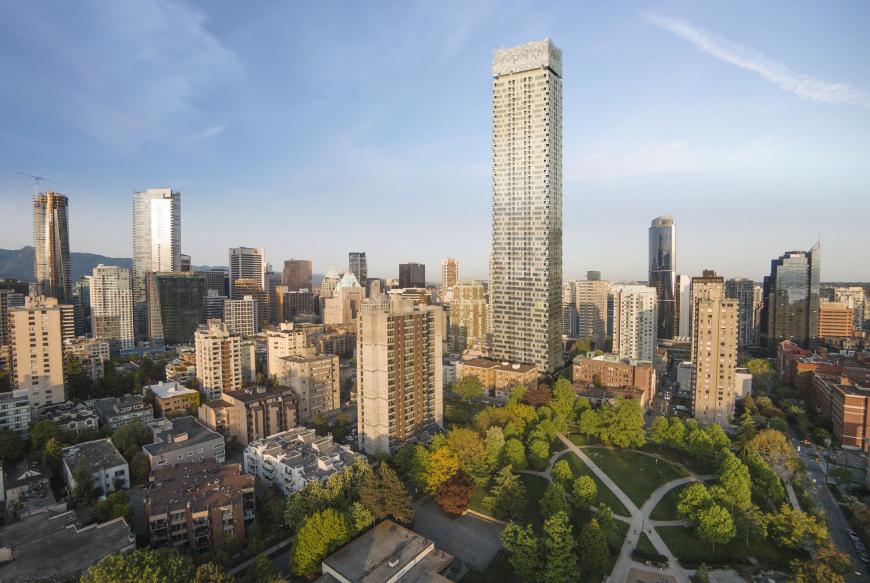 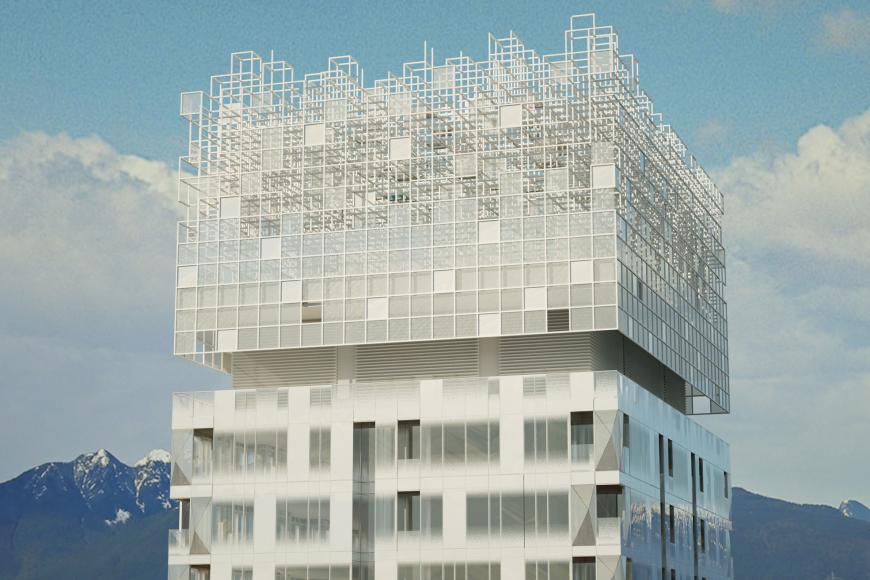 The renderings of the First Baptist Church proposal were provided to Vancity Buzz by Westbank Projects Corpooration. The article was adapted from the original Vancity Buzz article published on Thursday, September 17, which did not include any artistic renderings.