In the 1950s it seems British Columbia took a much tougher stance on those who carelessly dropped their cigarette butts on the ground. Circulating on the internet is a vintage photo of a sign by B.C. Forest Service warning passers-by against throwing their butts off the road. It says: “The one who dropped it should also be hanged. Prevent forest fires.”

The somewhat aggressive sign outside Manning Park is a contrast to the way B.C. now gently enforces a provincial by-law that states: “A person must not start or risk starting an open fire in forest land or grass land, or within 1 km of forest land or grass land, by dropping, releasing or mishandling (a) a burning substance, or (b) any other thing that the person reasonably ought to know is likely to cause a fire.”

All it takes is one cigarette to light a blaze spanning thousands of hectares and this was made abundantly clear in 2003 when one person irresponsibly left their cigarette burning in the brush and caused a 26,420 hectare wildfire that sent 72 homes and nine businesses up in flames and evacuated 3,800 people.

The McLure Fire is just one example of fires caused by humans every year that cost B.C. taxpayers hundreds of millions of dollars to fight. But the penalty for tossing a lit cigarette? Only $173, a little more than the fine for running a red light.

If this amount seems low, it’s because it is.

In 2014, 44 per cent of wildfires were caused by humans, meaning 652 of the 1484 fires that burned last year were completely preventable. In total, the province spent $297.9 million fighting these fires, one of the most expensive fire seasons in the last decade.

However, this year looks like it might leave 2014 in the ashes. Since April 1, there have already been over 900 wildfires, 60 per cent of the 2014 total, with no end in sight. And the tab has already reached $100 million. 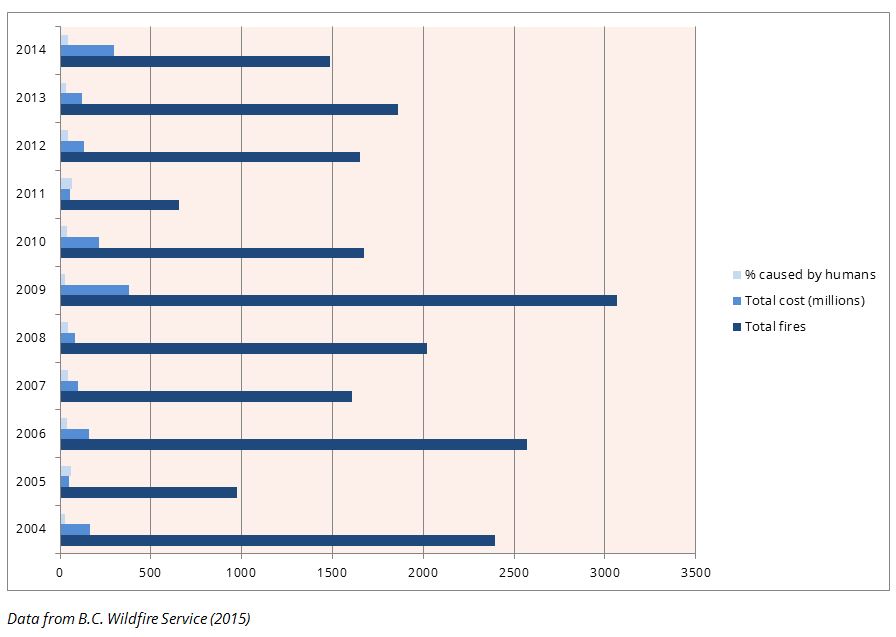 Other regions around the world have understood the dangers of tossing cigarette butts far better than B.C. In Calgary, a person can be fined $1,000 for throwing a burning cigarette out a car window. In Los Angeles, someone will be charged about $635CAD plus eight hours of community service for the same offence. Melbourne, Australia mandates that dropping a cigarette butt will face a $286CAD fine, and if the cigarette is still burning, that reaches to $574CAD.

The United Kingdom charges $156CAD and Paris $95CAD for just dropping a butt on the street.

The steepest penalties occur in Western Australia during a Total Fire Ban. “Any person who disposes of burning tobacco, or a burning cigarette, cigar or match in circumstances that is likely to set fire to the bush; including by throwing it from a vehicle, could face a fine of $25,000 and/or 12 months in jail,” says the Western Australia Department of Fire and Emergency Services.

Considering the proximity B.C.’s major communities have to expansive forests, doesn’t $173 seem like a small dime in the bucket for putting tens of thousands of hectares of forest at risk?

“Improperly discarded cigarettes, vehicle exhaust, illegal use of fireworks and sparks from equipment can easily ignite wildfires in B.C.’s current hot and dry conditions,” says the Ministry of Forests, Lands and Natural Resource Operations. While it’s not possible to determine exactly how many fires are caused by discarded cigarette butts, they are one of at least three major culprits, including unattended campfires and arson.

Lighting a campfire under the current restrictions will set you back $345, but fines could go ever higher. “Anyone found in contravention of an open fire prohibition may be issued a ticket for $345, required to pay an administrative penalty of $10,000 or, if convicted in court, fined up to $100,000 and/or sentenced to one year in jail,” says the B.C. Wildfire Act.

The only time a fine for discarding a lit cigarette but can go above $173 is if it causes or contributes to a wildfire. In that case, the person responsible may be ordered to pay all firefighting and associated costs.

Mike Barre is the volunteer firefighter who caused the 2003 McLure fire by tossing away a cigarette in the forest. That fire cost $31.1 million to put out and caused over $8 million in property damage. Barre was fined $3,000.

The Vancouver Park Board requires a $500 fine for anyone caught smoking in a park, and fire prevention officers will be increasing patrols around the city due to this summer’s extremely warm and dry weather.

In fact, Vancouver Fire and Rescue has put out over 35 grass fires caused by smoking in the last week. Just last night, a cigarette was found to blame for a small fire that broke out at the New Westminster construction site of a new elementary school.

District of North Vancouver Assistant Fire Chief Mike Cairns thinks so. “Bylaws should be reviewed. With what the result can be from tossing a lit cigarette, the fines should be raised for sure. One cigarette can take out a community. It’s an easy habit that needs to be stopped, and can be stopped.”

Cairns is no stranger to fighting brush fires. In the last few days, arsons set 14 individual fires in a Lynn Valley forest, but cigarettes have been to blame for many more.

Watering your lawn against water restrictions right now could cost you a $250 fine and some might argue the consequences of that offence are minute compared to what a single cigarette could cause. Likewise, the fine for drinking in public is $230, and we all know what dire consequences that could have.

Sarcasm aside, the City of Vancouver has no specific by-laws or fines against tossing cigarette butts, lit or otherwise, on the ground, but does enforce two no-smoking by-laws for parks and around or near buildings. In parks, officials say they have noticed a decrease in smoking since the smoking ban was introduced in September 2010.

“While we see a general trend down in smoking on parks and beaches, our park rangers don’t hesitate to issue the $250 fine particularly in these extreme fire hazard conditions,” says Park Board Chair John Coupar.

Neither the City nor the Park Board plan on raising fines or establishing a separate fine for tossing cigarettes.

However, hope may be on its way as the provincial government does say the Ministry of Forests, Lands and Natural Resource Operations is currently reviewing fines under the Wildfire Act.

When asked if they think fines for tossing cigarette butts on the ground and risking a wildfire should be increased, commenters on Twitter agreed unanimously to the idea.

@VancityBuzz @JillSlattery have them repay the cost involved to put the fire out, similar to getting rescued on the north shore.

Yup. Make it $1000, whatever. People shouldn’t be doing it regardless. Bad for dogs, children, and fires. #lazy @VancityBuzz @JillSlattery

@LindsayBissett @VancityBuzz @JillSlattery This is an awesome point as a $173 fine doesn’t cover the damage a tosser does!!

@VancityBuzz @jillslattery not only for a lit one. Too much pollution and disturbance even in the street with smoke and butts