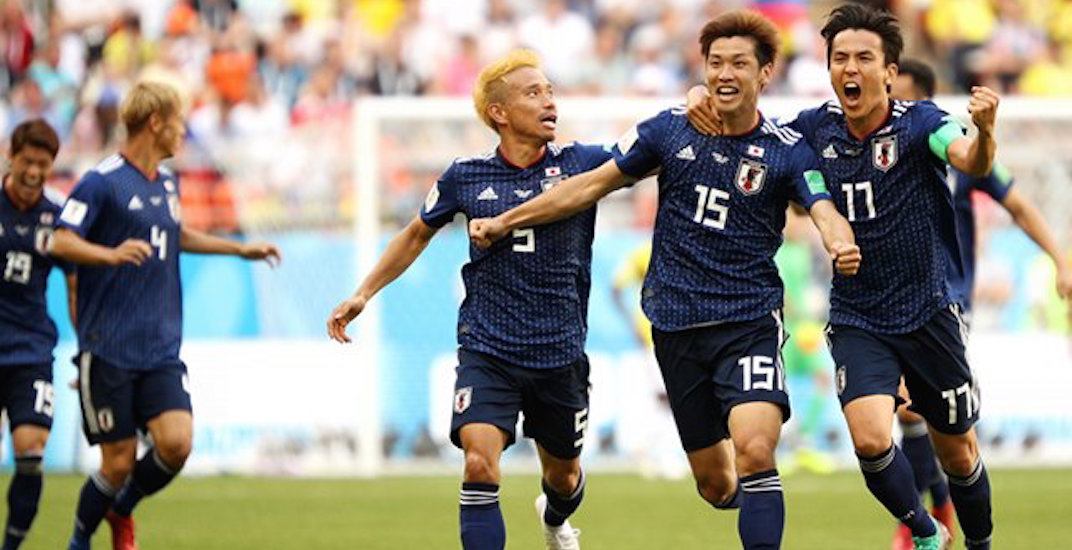 Japan made World Cup history on Tuesday, winning their opening match 2-1 against Colombia.

The win marked the first time that an Asian country has defeated a South American team at this tournament, in 18 tries.

It took less than five minutes for Colombia to dig themselves into a deep hole.

A deliberate hand ball in the box by Carlos Sanchez Moreno not only gave Japan a penalty, which Shinji Kagawa would convert on, but it also earned a red card.

A DREAM START! #JPN take the lead on a penalty shot in the opening 10 minutes of the game. #WorldCup pic.twitter.com/GT24SGhO8U

Despite being down to 10 men, Colombia levelled the match before the end of the half, scoring on an inventive free kick goal in the 39th minute. Juan Fernando Quintero actually shot the ball under the wall with an off-speed shot that fooled the Japanese goalkeeper.

Quintero goes under the wall and just sneaks it past the keeper to tie it up #COL#WorldCup pic.twitter.com/3P2zYxDHyp

The lead wouldn’t last though, as Yuya Osako’s header off a corner in the 73rd minute gave Japan the goal they needed for the win.

Yuya Osako heads it home to give Japan a 2-1 lead late in the match.#WorldCup pic.twitter.com/EoMXnxqAQl

Naturally, fans back in Osaka celebrated by jumping into the canal.

Today’s other Group H match was also an upset, as Senegal surprised Poland 2-1.

The win was the first for an African country at this World Cup. African nations had a combined record of 3-9-3 during the group stage at the last World Cup in Brazil.

Senegal was the beneficiary of some good fortune, capitalizing on an own goal by Thiago Cionek in the 37th minute to take a 1-0 lead.

OWN GOAL ALERT 🚨🚨#SEN grabs the lead late in the first half after Cionek deflected the shot into his own net.#WorldCup pic.twitter.com/Lk6fwuaLXn

In the 60th minute, Poland goofed again, as a sloppy pass led to a gift for M’Baye Niang to give Senegal a two-goal cushion.

ON THE FIELD AND INTO THE NET!

Niang comes back onto the field, chases down the ball and puts it past the keeper into the net to make it 2-0 #SEN#WorldCup pic.twitter.com/Xylpz8Kr9g

Poland got one back in the 86th minute from Grzegorz Krychowiak, but it was too little, too late.

It's not over yet!!#POL gets one back late on a header from Grzegorz Krychowiak.#WorldCup pic.twitter.com/dM8o3UBsDn

After cleaning up on the pitch, Senegalese supporters cleaned up – literally – in the stands.

A class act from the Senegalese fans after their match against Poland today. #WorldCup 👏🏻🇸🇳 pic.twitter.com/36l1Y4kDfF

Russia all but secures a spot in the knockout stage

Barring something unforeseen, Russia will advance to the knockout stage for the first time in 32 years after another impressive win on home soil.

After winning the opener 5-0, the hosts beat Egypt 3-1, despite Mo Salah’s return to the lineup.

After a scoreless first half, an own goal by Ahmed Fathy gave Russia the lead in the 47th minute. That was followed up shortly after by goals by Denis Cheryshev (59th minute) and Artem Dzyuba (62nd minute) to put the match out of reach.

Denis Cheryshev does it AGAIN!

His third goal of the tournament makes it 2-0 #RUS#WorldCup pic.twitter.com/S6II3IT1CQ

AND ANOTHER!!#RUS continues the scoring. This time it's Artem Dzyuba and just like that, it's 3-0.#WorldCup pic.twitter.com/rVLG8zT2Ap

Salah scored on a penalty in the 73rd minute to give his country a glimmer of hope, but it wasn’t to be for the Egyptians.

Salah scores from the spot to cut the lead to two goals. It's his first-career #WorldCup goal. pic.twitter.com/JXH6cCxZZK

Egypt needs Saudi Arabia to pull off an upset win over Uruguay on Wednesday to keep their hopes of advancing alive.

And thus, after today’s result, things are looking good for the hosts…#RUSEGY // #WorldCup pic.twitter.com/9eXSJdG2Pl

Cristiano Ronaldo and Portugal are back in action on Wednesday against Morocco. Saudi Arabia needs a result against Uruguay to stay alive, while Iran can punch their ticket into the next round if they find a way to beat Spain.