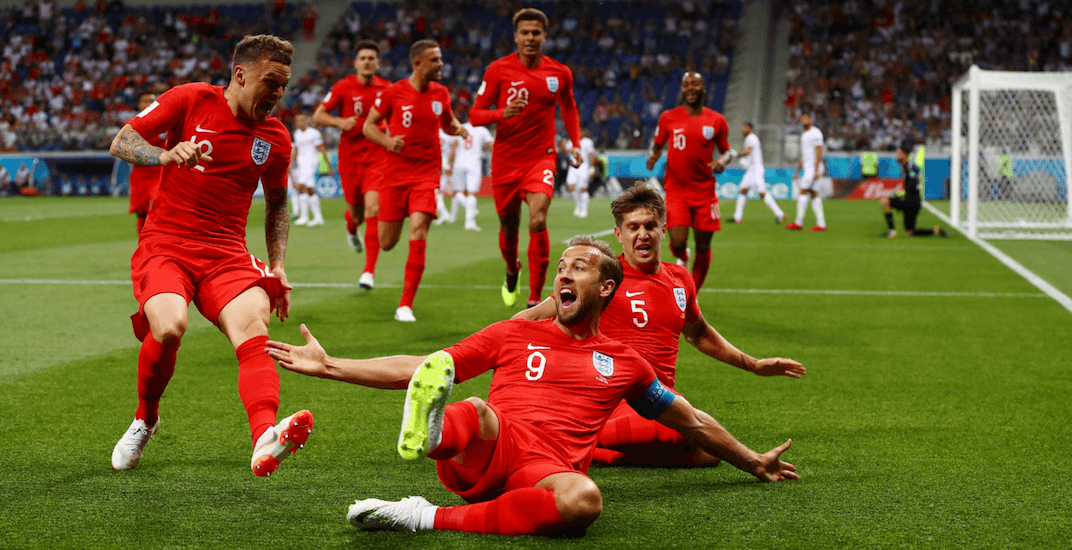 England fans are used to disappointment at the FIFA World Cup.

So when the score was level in the final moments of their game against Tunisia on Monday, they could be forgiven for expecting the worst.

But this time was different. England did their job, avoiding pain and humiliation for at least another day.

The scoreline was close, but the run of play wasn’t, with England getting the result they deserved – a 2-1 win – against Tunisia.

What a feeling to score a winner for @England at the @FIFAWorldCup. Loved it! No less than we deserved. 🦁🦁🦁 #ThreeLions #ENG #WorldCup pic.twitter.com/Pq93wOKHAd

England got off to a roaring start, scoring 11 minutes into the match.

Harry Kane, England’s captain, scored first – converting on a rebound after a spectacular save by Tunisian keeper Mouez Hassen on the initial chance. Hassen was injured on the play and had to leave the game.

CAPTAIN KANE CAN DO IT!#ENG scores on a rebound to give the Three Lions a 1-0 lead over #TUN #WorldCup pic.twitter.com/aqpt4Kj20T

The lead didn’t last long though. Ferjani Sassi scored on a penalty in the 35th minute to tie the game for Tunisia, which is how this game remained until late. England’s Kyle Walker was to blame for the goal, as his foul in the box was the cause of the penalty.

TUNISIA SCORES!!!!#ENG gives up a penalty and #TUN takes advantage of the opportunity…1-1! #WorldCup pic.twitter.com/Sd8QRUWHqo

Kane was England’s hero again, scoring one minute into injury time with an impressive header into the back of the net off a corner kick.

LATE & GREAT, HARRY KANE DOES IT!#ENG Take the lead in stoppage time to break the hearts of #TUN #WorldCup pic.twitter.com/P6pe75HO6u

An artificial earthquake was recorded in Mexico City after their country’s upset win over Germany on Sunday.

Wonder if there was seismic activity in England after Kane’s second goal:

How about these for celebrations? Harry Kane's late winner went down well with England fans watching the World Cup in Sneinton Market. #TUNENG pic.twitter.com/oITHkxu8IH

This may be Belgium’s time to shine.

The third-ranked team in the world coming into the tournament, Belgium is the only team in the top-six to win their opening game, which they did convincingly, 3-0 against Panama.

After a scoreless opening half, Belgium began to show their class.

Dries Mertens scored in the 47th minute on a thundering volley to give Belgium a 1-0 lead.

Mertens scores on a VICIOUS volley to give #BEL a 1-0 lead #WorldCup pic.twitter.com/0DrOT771hp

Romelu Lukaku scored two goals six minutes apart, in the 69th and 75th minute to put the exclamation point on the win.

A beautiful sequence from Belgium ends with Romelu Lukaku heading home his first of the tournament to give #BEL a 2-0 lead. #WorldCup pic.twitter.com/a9V5SKQRj1

Lukaku has done it again!! A perfectly timed run and finish makes it 3-0 #BEL #WorldCup pic.twitter.com/yDo9ZGcJEe

Sweden squeaked by South Korea, with the help of video review.

Viktor Claesson was tripped in the box by Korean defender Kim Min-Woo in the 65th minute, but the call was initially missed by the referee. The Video Assisted Referee didn’t miss it though, correctly awarding a penalty to Sweden.

The foul that earned #SWE their penalty. #WorldCup pic.twitter.com/P0CnL1uxrA

Swedish captain Andreas Granqvist made no mistake on the ensuing penalty, giving his team the 1-0 lead they needed for victory.

VAR STRIKES AGAIN!#SWE takes a 1-0 lead after being awarded a penalty via the Video Assistant Referee #WorldCup pic.twitter.com/7RmeODNNKB

Sweden is off to a great start in what is suddenly a wide-open Group F, given Mexico’s upset win over Germany on Sunday.

The host Russians will be in action for the second time in the tournament on Tuesday, trying to build on their impressive 5-0 win in the opening match.