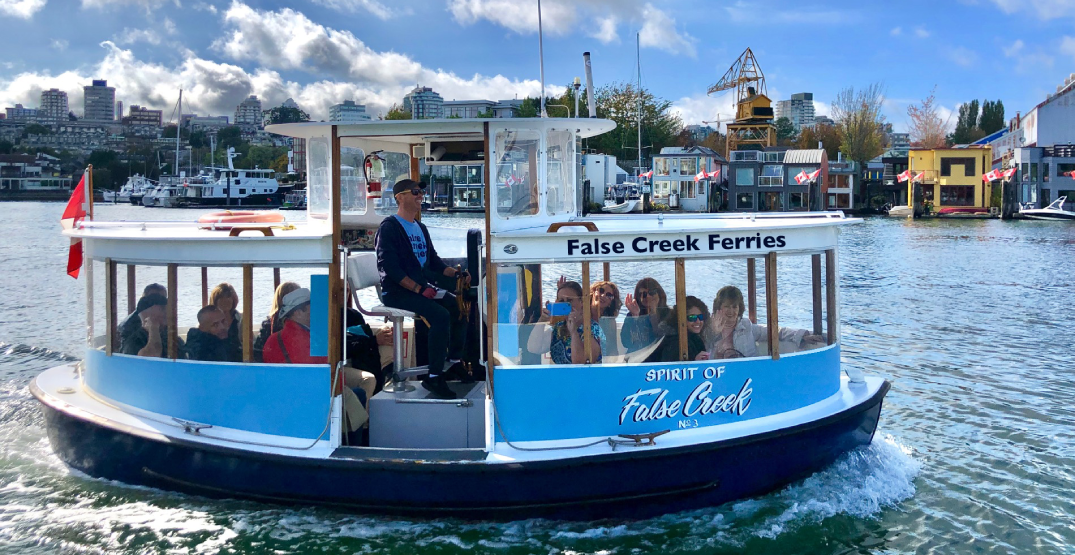 Whether you’re native to Vancouver, have only lived here a short while, or are an out-of-towner who spends ample time in the city, you’re probably familiar with those little, blue ferry boats that go to Granville Island.

As Vancouver’s original ferry fleet, False Creek Ferries have been ushering locals and tourists alike across the water since 1982 — making this year their 40th anniversary. Whether it’s to Granville Island, Sunset Beach, Science World, or one of the city’s best dog parks out at Kits Point, the people who operate these little boats take strangers from all walks of life from point A to B every day. While this may at first sound mundane, it’s anything but.

It’s from these iconic little ferries that magic happens — a quiet moment on the water before the city wakes up, a seal popping its head above the water just as you thought you were alone, a fiery sun setting over the horizon. But the most marvellous, beyond the natural wonders and unique vantage point from which riders can see Vancouver, are the human moments.

For four decades now, False Creek Ferries has undoubtedly fostered a welcoming, positive workplace culture, with employees who have happily been with the company for years. That sense of family extends to many of their regular passengers who take the ferry to work, school, or wherever they need to be.

And they each have their own unique, heartwarming stories that comprise what’s kept them at the helm for so long. From awe-struck kids to all the dogs (yes, furry friends are welcome aboard) that set sail with their owners, a five to 15-minute ferry ride often transforms into a special moment. 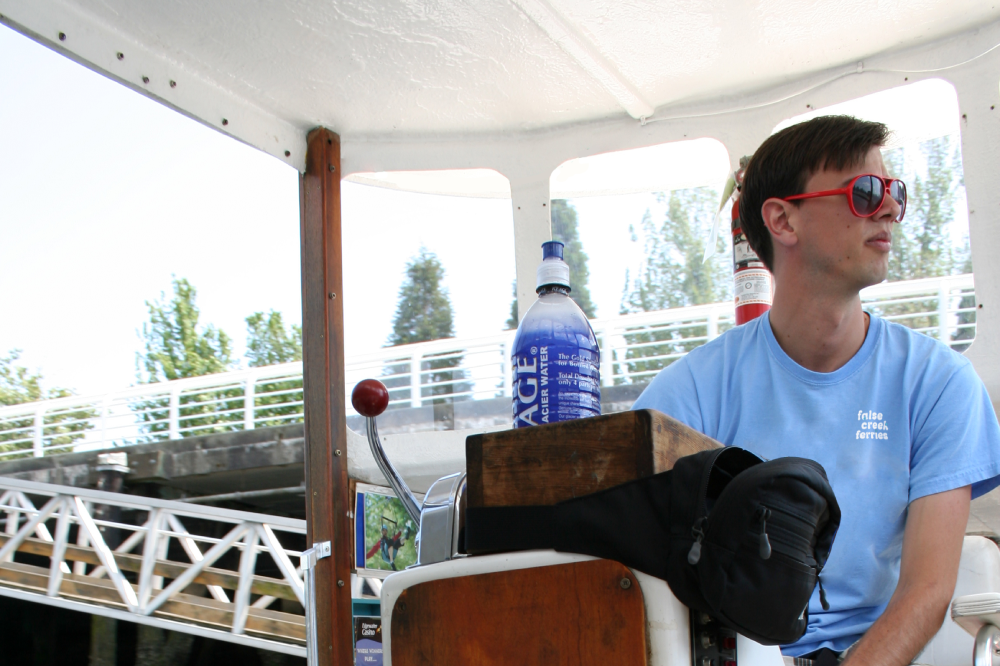 Elliot began with the Ferries in 2009, took an intermission to live as an actor and composer, and then returned this past March. He loves the gig most for connecting with people on the water.

“There’s a pirate ship on False Creek that can be rented for parties which come with ‘real’ pirates. Yesterday, a passenger on my boat started booing the pirate ship. The rest of the boat booed too. The pirates shook their fists and swords at us. It was hilarious,” Elliot tells Daily Hive.

“Within moments, the boat can be united and turned into a vessel of connection. There is magic in humans enjoying each other’s company, and it’s especially potent when folks arrive on the ferry as strangers and leave as friends.” 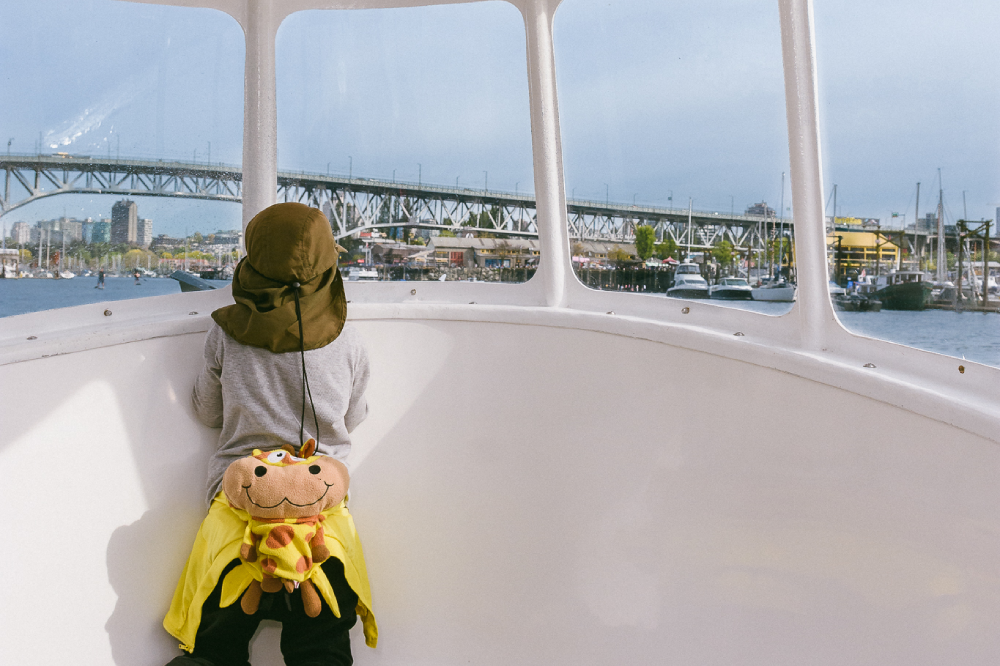 For Wolferstan, the wonders of his job range from seeing natural beauties on the water to the excitement of children from simply being onboard the boats.

“Children can get super excited and awestruck by some aspect of being on the ferry, whether it’s the ferry itself or some natural phenomenon outside the ferry,” he says. “If their caregivers are concerned about the child’s volume or whatnot, my joke is that I wish all my passengers were this excited.” 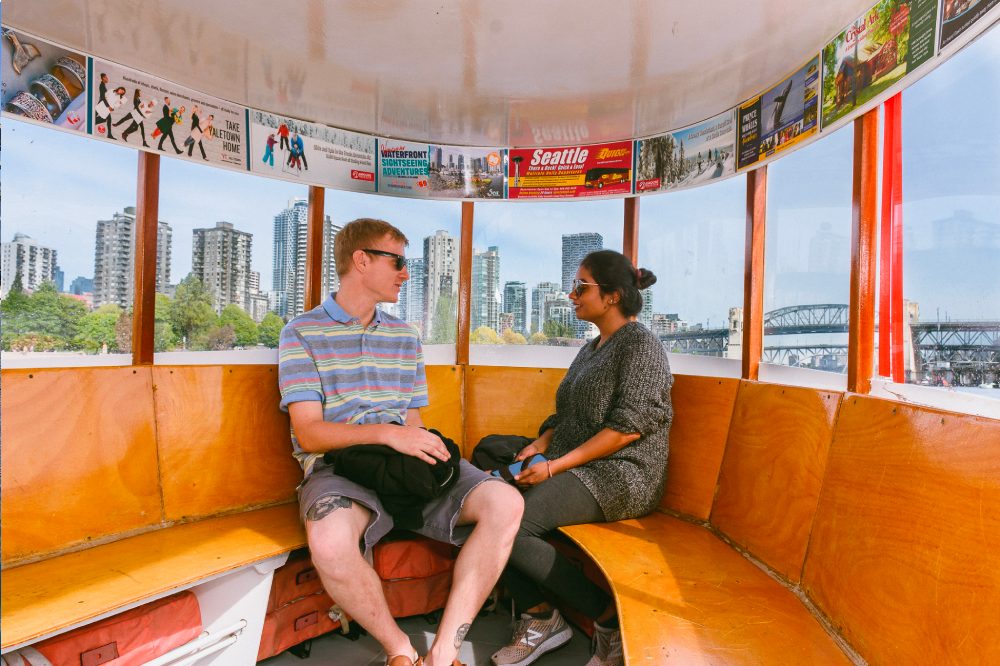 After over a decade of sailings, Wasko has a plethora of heartwarming stories, but this one of young love takes the cake.

“On a cold November day a few years back, a pair of young lovers said goodbye to each other on the dock. They looked like they couldn’t possibly be older than 15,” says Wasko. “Not many words were exchanged during their farewell and neither of them was being particularly demonstrative, save for a meaningful kiss that lasted a few moments too many to be called short, though the emotion between them was palpable. They waved and smiled painfully at each other as we pulled away from the dock.”

“He was on his way to our Science World stop to catch a bus home at the station across Main Street there. He was pretty stoic for the first five minutes of the trip. Then, he got a text, which I assume was from her because it seemed to punch him right in the heart, and he sniffed back the tears that began to well,” says Wasko.

“I wanted to tell this kid to not hold back his tears on my account. To go ahead and feel it, man. That there’s nothing like being young and in love and that he should count himself extremely lucky to have her and to be feeling what he’s feeling. But there were too many people on board, and love and separation and heartache and holding it together on a crowded boat are all part of growing up — and it’s really none of my business.” 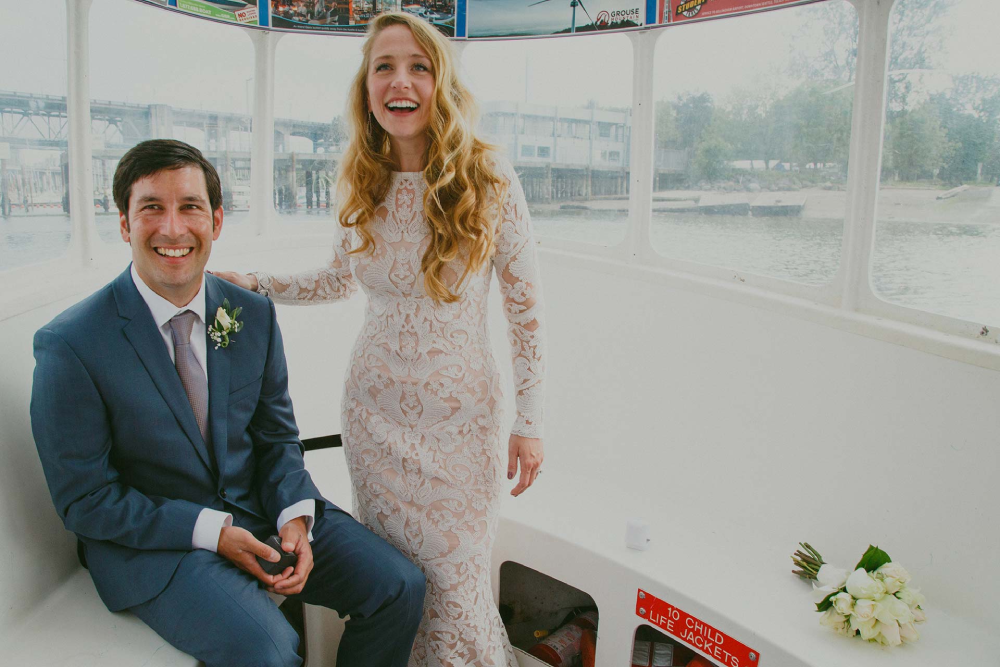 “I got really gushy at an onboard wedding,” says Taylor. “It was during the pandemic, full tux and a gorgeous dress. Pouring rain. Only four people plus the officiant. They had wanted a big wedding but could not do it because of COVID, but they didn’t let terrible weather and a pandemic stop their love.” 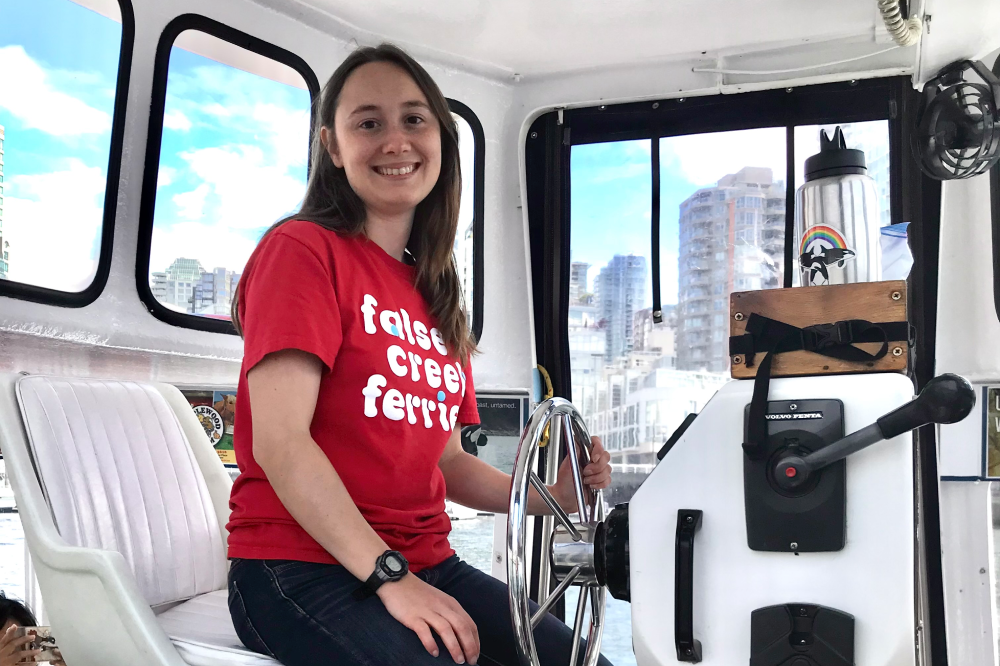 “You never know what to expect, every day there is something magic or eccentric or unusual, and that’s the charm of it all,” says Charish of the best parts of her job. Yet for her, the special moments with people take second place to the ones with dogs. 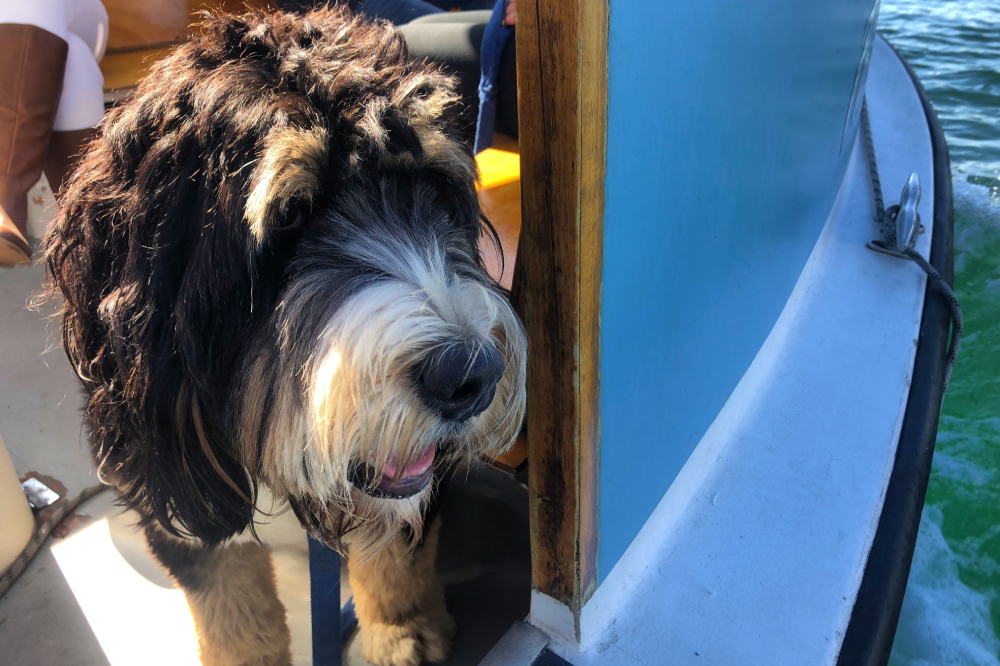 “Big dogs, little dogs, long-haired dogs, short-haired dogs, dogs that like to stand in the doorway and sniff the salty air and dogs that are a bit nervous and would rather stay inside and close to their owner. Having those big eyes and a little furry beast quivering with excitement looking up at you while you’re driving never gets old.”

“Every Canada Day morning, [we] put on a little ferryboat ballet, where we all maneuver around in unison,” says Megill. “It’s always a fun, little show to put on for those out on their balconies and the seawall. We shut down briefly during the pandemic, but when we reopened we did an impromptu ferry ballet along the creek, both to celebrate getting back up and running, and to hopefully bring a bit of cheer to the neighbourhood.”

“A few days later, we heard from a passenger who said that she was moved to tears by watching the boats dance along the harbour and that it was a sign that things would turn out alright. It was very humbling to hear that we had that effect on someone in what was a very uncertain time for so many.” 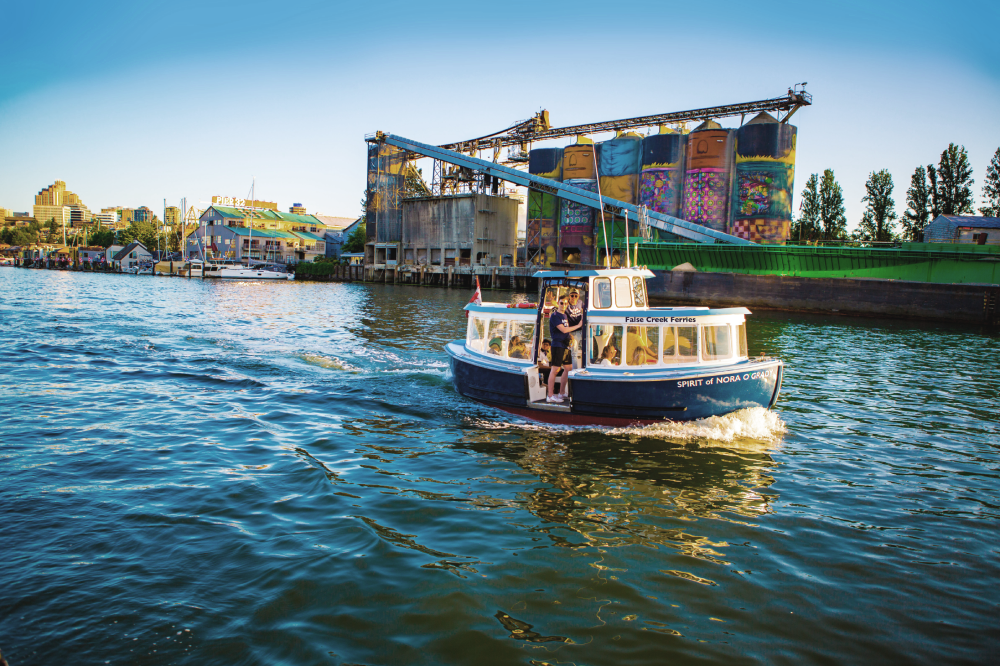 “[Once] a young lady came to me on the long dock and after she took a second look, she asked, ‘Are you, Mr. Ko?’ I said yes, and she said, ‘You taught me biology in Prince George!”

“During the trip to Science World, I found out she now has a Ph.D., is living and teaching in Edmonton, and was in town to do a presentation at the Convention Center,” says Ko. “Encounters like this are memorable and rewarding.” 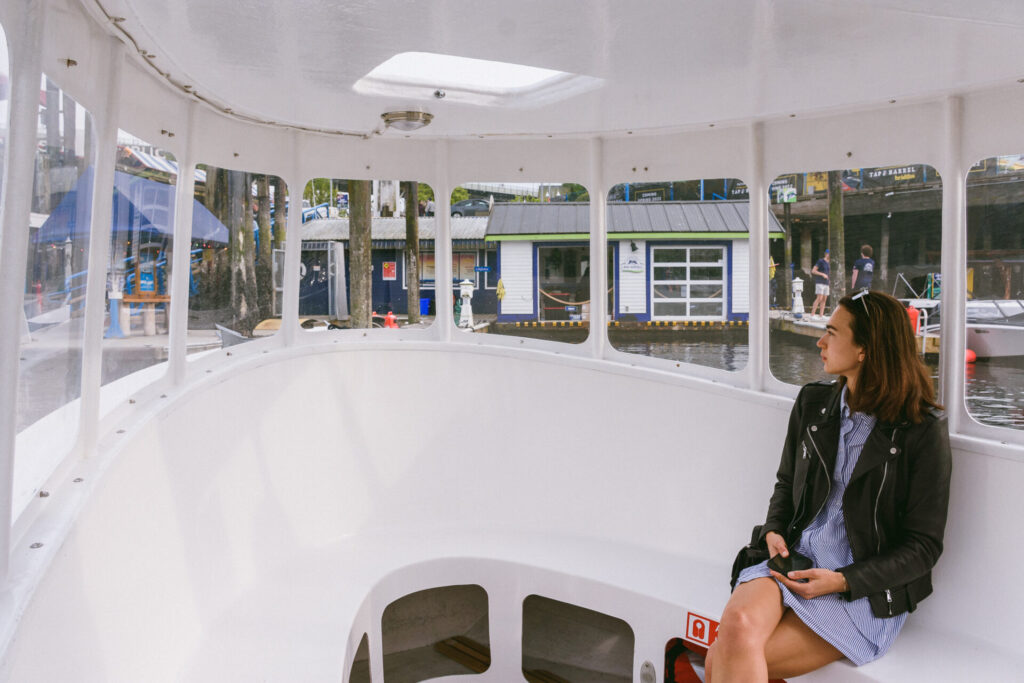 “The only complaint I have received from one of our regular passengers is that the commute is too short,” says Nemeth. “Once underway, I find that most of our customers enter an almost meditative, calm attitude. They look out the windows and see their city from a new perspective. One person told me that it was like visiting an art gallery.”

And one of his favourite experiences was when a woman purchased a day pass to take advantage of this calm — a writer who had found a quiet space to be creative. “Suddenly, a regularly scheduled run became a fun exercise for me as well, as I shared her adventure.” 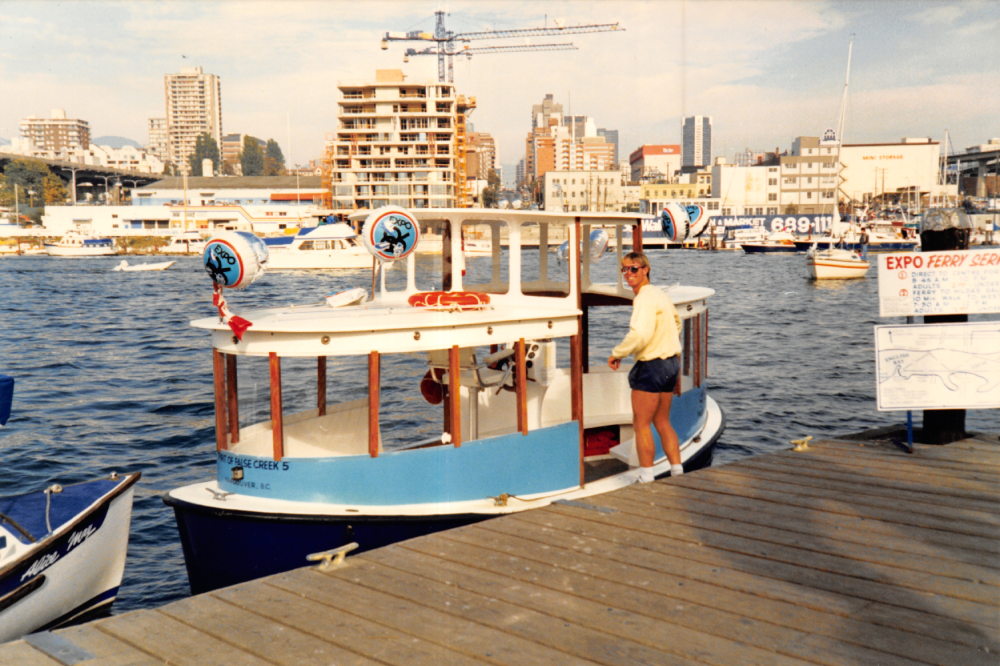 “A grey whale swam under my ferry in 2010. At first, I couldn’t make sense of what I had seen,” says Patterson. “Then, I saw something very large just under the surface immediately in front of the ferry. For a moment, I was certain we would collide, but I didn’t have time to do anything except watch it glide silently under the ferry. It was quite a sight, and it was the only time anyone could remember a whale swimming up the creek.” 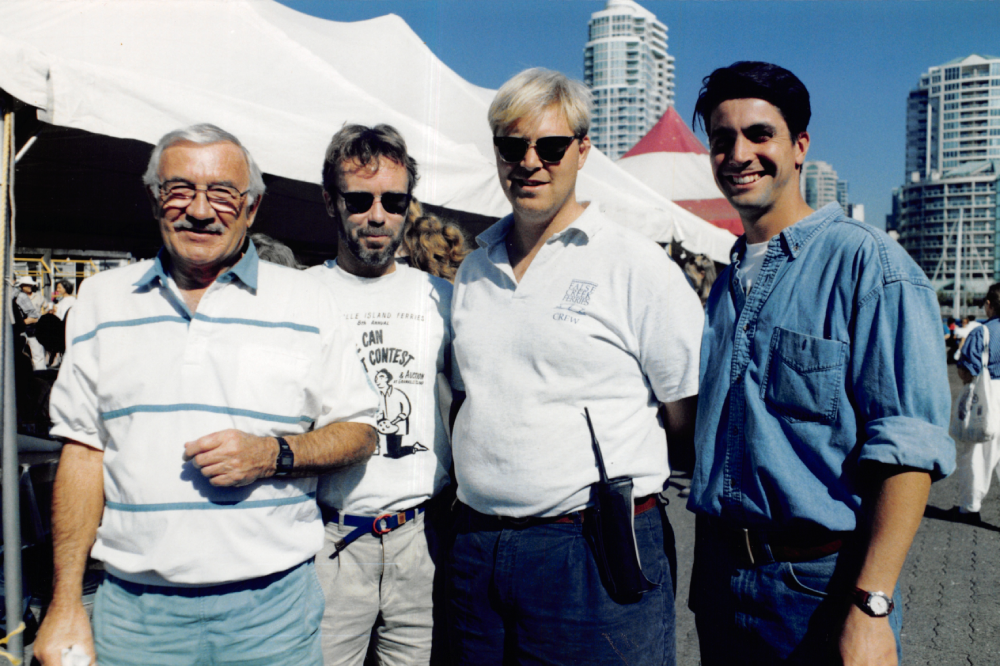 “[I love] the passengers that have become friends and the crew that have become like a second family. The McInnis family who have owned the company and have stewarded it through four decades are great people to work for.”

Riders can attest to the sweet things to be seen abord the little boats, too, like Richard Morris, who has commuted to work on the ferries for the past six years from the Aquatic Centre to Granville Island.

“I love how calming my trip to work is. After a month or so, the crew and I got to know each other, and now we just pick up our conversations where we left off the previous morning,” he says. “I have the best commute in the world. It’s a lot more relaxed and friendly than taking the bus.”

Despite having grown from its humble beginnings of just two boats and docks into a fleet of 17 ferries that serve False Creek, the little, blue boats have stayed true to their roots. They’re a community full of stories, quirky personalities, and varied backgrounds and talents who feel like a family and take pride in their jobs. 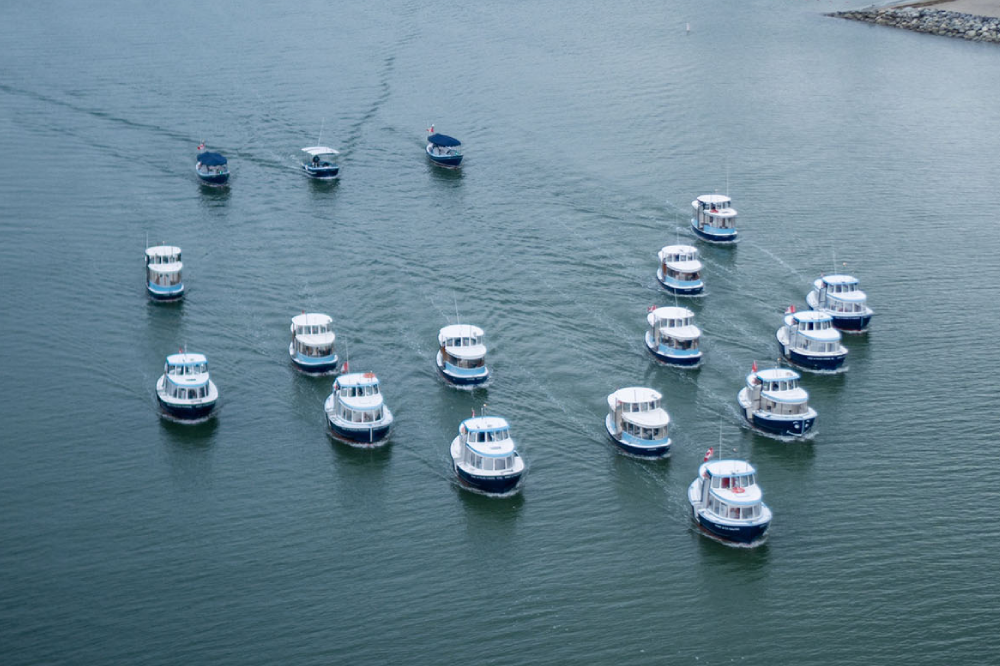 The little blue ferries run every day, rain or shine. Take a ride on the Vancouver institution this summer and make some memories of your own. You can also catch the False Creek Ferryboat Ballet on the morning of Canada Day and before the fireworks shows this summer in English Bay, and the floating Jazz concert to be held off the Olympic Village seawall on June 22 at 7 pm.

To celebrate their 40th anniversary, False Creek Ferries is offering a special discounted rate on their one-month ferry passes. You can use the coupon code FCF40 at checkout on their website to get the exclusive deal.