I am by no means the wisest man on the planet, but I have noticed two things in my 25 years of life. First, we usually try to make the spaces we inhabit (particularly interiors) as aesthetically pleasing as possible. Second, we usually try to hide our failures. But in ‘Vexations’, the Access Gallery’s current exhibition, neither of these maxims are on display.

Rather than creating a visually appealing space the artists have created an installation that transports us to a world where interior space is dystopic rather than pleasing. And rather than paint over their failures the artists embrace it, giving us art that is not only decaying but begs us to ask a rather serious question: is this what they intended? The result is brilliant.

Upon entering the gallery you will see a series of installations hanging from the ceiling and walls, and they will look like trash. In fact, they are probably made from trash. And you will also notice the black tarp that covers most of the floor and the myriad footprints that cover the tarp. Do not fret – this is intentional. One of the exhibit’s theses is that interior design does not have to be a slave to making interior space seem ‘ideal’ or ‘aesthetically pleasing’. Instead, it can just as easily make a space seem repulsive or off-putting – dystopic, if you will. This may seem like a rather obvious observation, but it isn’t. Think about it: when was the last time you actually thought about making your kitchen or living room seem less appealing to people? The answer is never, and the whole point of the exhibit is to show us what happens when we act opposite to the norm. Perhaps the most ironic part of the whole exhibit is that even though they are trying to use space in a dystopic manner they have still managed to create something that is aesthetically pleasing. Whether or not that was their intention I do not know.

But why is failure on full display? The answer is simple: the artists have created something that is decaying faster than they intended. They clearly intended for some decay to occur, but when you look at the floor and the seemingly infinite number of footsteps littering the ground you realize that the artists have given up control of the exhibit. And by ‘given up control’ I mean they created something that they knew would be damaged by the viewers. But they also knew that the viewers would probably damage the exhibit faster than they expected, and that there was no way for them to control it. In other words, they have failed to control the decaying/slow destruction of their art. Because of this we have no idea if we are viewing this exhibit in the way the artists intended us to or not. So if you want to see failure at its most glorious, and help contribute to it, I suggest heading over to the Access Gallery. You won’t regret it. 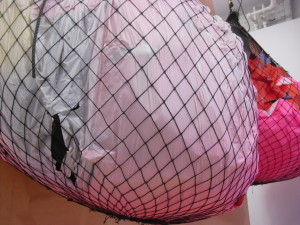 ‘Vexations’ runs until March 8th at the Access Gallery. The gallery is located at 222 East Georgia St. (Website: http://accessgallery.ca/)