Keith Langergraber’s ‘Theatre of the Exploding Sun’ is excellent. In fact, it is probably the best exhibit the Richmond Art Gallery has shown in years. Drawing influences from the classic 1972 film ‘Solaris’ and horrible sci-fi fan fiction, this exhibit forces us to contemplate not only the process of film-making, but the idea of science fiction as art.

The heavy influence that the film-making process has on Langergraber’s work is made obvious by a series of large black and white drawings that hang at one end of the gallery. They are of sci-fi movie sets, but each set is located in a different city, with the cities’ landmarks visible in the background. One of the cities is Vancouver, and in the background we see (among others) the Marine Building, the Harbour Centre, and the Sun Tower.

This author interpreted these drawings as an attempt to remind the viewers that these movie sets (where fantasy worlds are created and filmed) are not located in some fantasy realm, but in the real world, and often near places where we live and shop.

The highlight of the exhibit is The Glass Island installation, which looks like it was stolen from the set of ‘Solaris’. It consists of a rock-like structure that is littered with glass, and rather originally is placed on a thick, and almost rectangular, layer of dirt. A film, also titled The Glass Island, plays on continuous loop on the wall behind it.

The film pays homage to bad sci-fi fan fiction – with their awful acting and even worse dialogue. Langergraber clearly understands the art of bad dialogue, as the film has one of the worst Wizard of Oz references you will ever encounter. It is one of those ‘it’s so bad it’s brilliant’ kinds of deals.

However, the best part of the installation is the way light reflects off the shards of glass. The shards not only reflect the colours and faces on the screen, but distort them as well, making you feel as if you are watching the movie in another dimension. The ability to make one feel like they have been transported to another dimension is certainly a goal of the science-fiction genre, and rather interestingly, it is also the goal of many well-known artists.

With this realization in tow, perhaps it is time that we stop viewing sci-fi as a realm populated with ‘nerds’ and ‘dweebs’ and instead view it as one populated with artists. I know I certainly will. 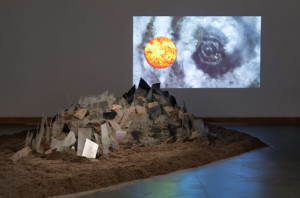