Video Games Live 2012 is back with a new show! The Canadian tour of the world’s largest symphonic orchestral video game concert kicks off in Toronto on October 25 and will make a stop in Vancouver for its finale. EXP Restaurant and Bar invites you to their new digs this Friday to celebrate in style.

The concert draws on the nostalgia of gamers young and old with classic songs from the most popular games. Video Games Live recreates them in a way that is part rock concert, part orchestra and part visual spectacle. It has captured the hearts of gamers around the world because of the immersive experience that includes songs from games you know and love, like Mario, Halo, Zelda, Final Fantasy and even Pokémon. 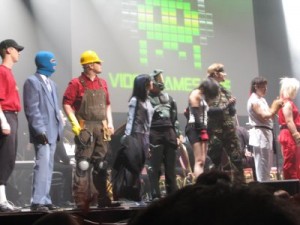 EXP, Vancouver’s first video game themed restaurant and bar, is inviting gamers out for an evening this Friday for Video Games Live Night. Dinner and cocktails will be accompanied by an orchestral score by Video Games Live. They will be giving away pairs of tickets to the November 6th, Vancouver finale at the Orpheum Theater.

Since we’re excited too, VcB will be giving away one of two pairs of tickets to the Vancouver finale of Video Games Live 2012 this week! You can enter and win by telling us what your favourite video game song is! The winner will be announced on Friday in this post.

For more information about this Friday, go to EXP’s Facebook event page:

For more information on the concert, go to Video Games Live 2012 website