Ex Machina (pronounced Ex-Mach-Ina not Machine-ah), is a play on the Latin term Deux Ex Machina which means “God from the machine,” is one of the best science fiction films you will see this year and is the smartest film when it comes to dealing with the very difficult subject matter of technological singularity and AI.

Alex Garland, who makes his directorial debut, is best known for his screen writing like Sunshine and 28 Days Later and he also wrote a few novels like one of my favourites The Beach.

Over the last few years there has been a trend, especially in the science fiction realm, regarding stories that focus on the use of AI (Artificial Intelligence). Most recently we saw this subject matter tackled in the films Transcendence and Chappie and that same narrative also played out in the upcoming Avengers 2: Age of Ultron storyline.

The idea of building machines or robots that can not only think and feel like us but also evolve and eventually be smarter than us, is something that excites and scares people. Stephen Hawking has gone on record in saying that the demise of humans will be at the hands of the machines with artificial intelligence.

Ex Machina is about a programmer named Caleb Smith (Domhnall Gleeson) who won an internal office contest at a large scale Internet-search company called BlueBook. The prize was hanging out with the CEO, Nathan Bateman (Oscar Isaac) at his home/research center. 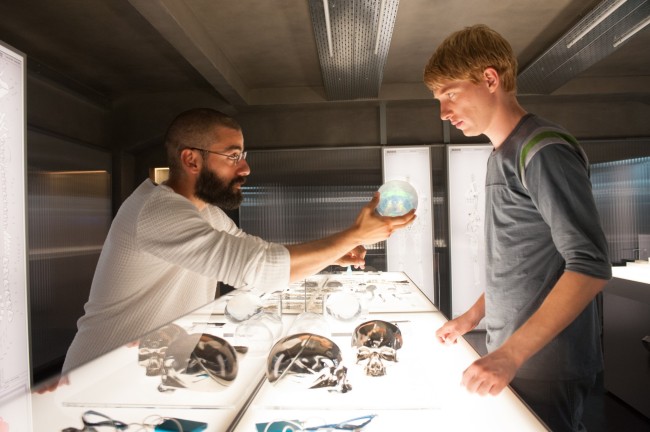 What Caleb ends up finding out is that he was selected to help Nathan’s groundbreaking work on Artificial Intelligence. Caleb is introduced and told to interact with a sophisticated robot named Ava (Alicia Vikander), and to conduct the “Turing Test” to see how closely Ava simulates human behaviour.

During the sessions with Ava, Caleb is impressed with how advanced her A.I. is and at the same time confused in why he is attracted to her. Both Ava and Caleb are able to speak freely during regular power outages when all surveillance equipment goes down.

What we end up getting is an intense and mysterious story that keeps us guessing. From start to finish Ex Machina is brilliant and will keep you off balance and always wondering what will happen next. 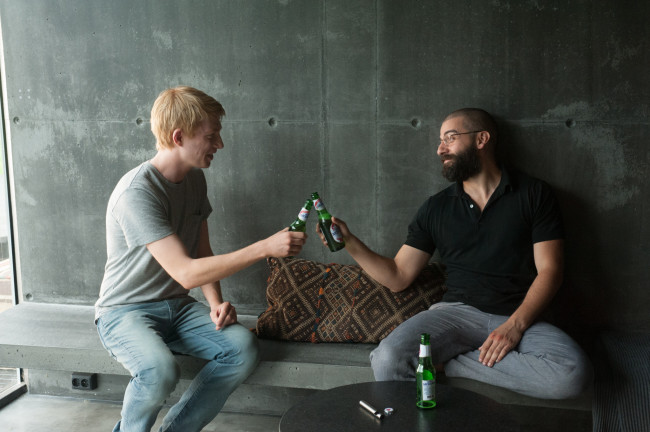 Nathan is a mysterious CEO who is one part manipulative and two parts dictatorial but at the same time wants Caleb to just look at him as a regular dude. Oscar Isaac, who some of you may remember from the film Inside Llewyn Davis, does such an amazing job in playing this part to a T. There is a creepy and weird scene when he starts disco dancing with one of his saucy robots.

I also thought Alicia Vikander who played Ava was fantastic. She is a Swedish actor who may have found her breakout role. It’s not easy to have to work with green screen and motion capture, but her performance was so subtle and engaging. Her eyes were very expressive, and like Caleb, some of you will find the robot sexy.

That’s another thing, the special effects were great. They weren’t over the top and the CGI was used in a way to make things seem real and not a cartoon. Kudos to Alex Garland on his directorial debut; mind you he has worked beside some great directors like Danny Boyle who I’m sure he learned a great deal from.

I don’t want to give too much of the movie away. You need to go see this. It’s on my list as an early…I mean very early Oscar contender. Let’s hope that it doesn’t become forgotten later on in the year.

The film isn’t just about A.I. It’s about jealousy, betrayal and our own basic but sometimes damaging human emotions. It’s the story of Frankenstein but with a more modern twist.

As scientists and futurists rush towards technological singularity, this film should make us pause for a moment and think about the repercussions of that. Maybe we should be trying to improve humans before we start on robots.

Ex Machina is going to get five rain drops out of five. It’s the year’s first great film and will become an instant classic. Go and see it in the theatre.