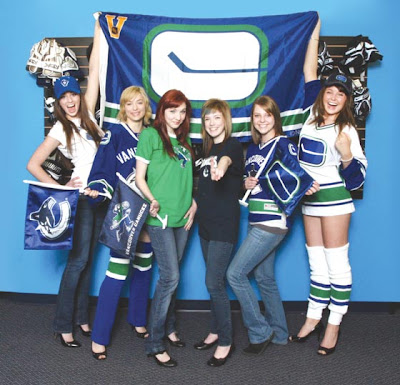 Image: 24hrs
Last week results from ESPN’s annual survey of NHL players (50 of them at random) about the sport of Hockey were leaked on the internet. While you can get the full survey results in the April issue of ESPN The Magazine, I thought I would share a few relevant answers with Canucks fans. Besides who buys ESPN’s magazine anyways.

1. Who’s the NHL’s best player?
A battle between Sid the Kid and Alexander the great, however, Ovechkin won with 73% of the vote, so wasn’t much of a battle. Canuck fans should take note that Roberto Luongo led in the category of most overrated. (6%)


6. Who’s the top ref?
Kerry Fraser took this one home, he’s been around the longest out of them all as well. Who got worst? Stephane Auger! I think we in Vancouver know all to well at how craptacular he is.

8. Who has the best groupies aka puck bunnies?
Montreal took top honour, was there any doubt, the women in Montreal are far more welcoming than the women in Vancity. I still think the women here are more beautfiul.Vancouver placed second, thanks to The Roxy. Just ask Patrick Kane ha!

9. Who’s the best fighter?
In second place is our very own Rick Rypien, considered by many the toughest in the league.

14. Who has the smartest fans in the NHL?
By a wide margin 32% Vancouver fans were selected. I find that difficult sometimes listening to The Team 1040. However, we aren’t moronic like Leafs fans, who still feel there team is relevant. News Flash, nobody cares about you guys anymore.


20. Who will win the Stanley Cup this year?
The Chicago Blackhawks are the favorites to raise Lord Stanleys mug. I guess we’ll be hearing more of Chelsea Dagger come playoff time.