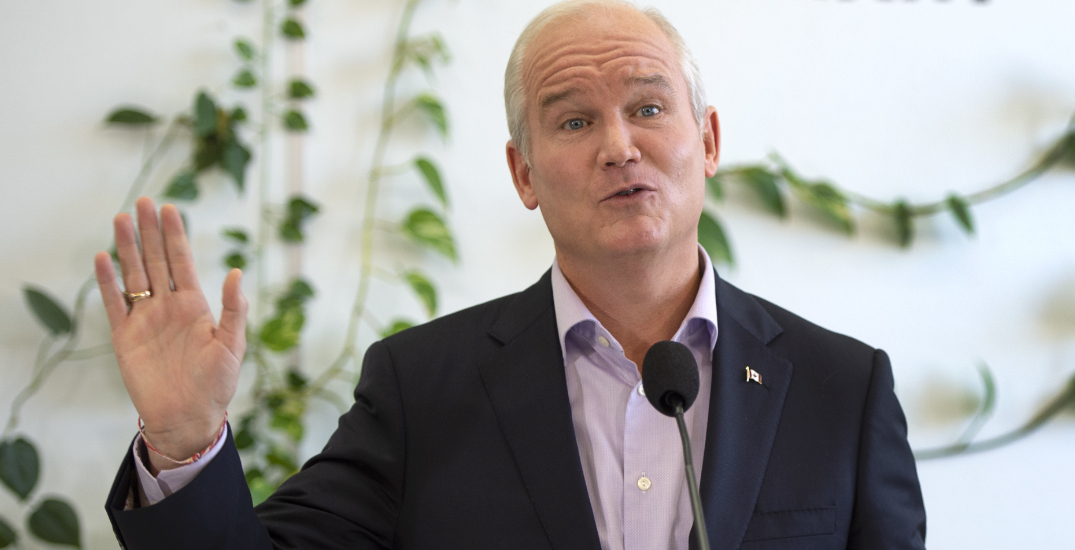 Erin O’Toole acknowledged a long-simmering sentiment within Conservative circles on Saturday: the Tory leader’s carbon-pricing scheme is not universally beloved among the party faithful.

Under the plan, unveiled in April as a loyalty-card style of carbon pricing, consumers would see what they pay on fuel stored into an account that can be used for green purchases later.

“It does price carbon and I do get some questions about it and some people frustrated about that, but it shows my commitment,” O’Toole said.

The comment came a day after he was confronted on the plan by a supporter who cited “a lot of pissed off farmers” at a Conservative gathering beside a thoroughbred race track in Saskatoon.

“By the time I finished that conversation, they understood,” O’Toole told reporters at a campaign stop in Edmonton.

Dubbed the “personal low carbon savings account,” the bid to replace the Liberal carbon tax is a signature policy of the party’s new climate change plan.

The regime to pay a price on greenhouse gas emissions marked a major shift for the party, which had long campaigned on scrapping the program introduced by the Liberal government under Justin Trudeau.

O’Toole, elected party leader last August, had promised to develop an emissions-reducing climate plan for the Conservatives ahead of the next general election, now set for September 20.

The scheme, announced on April 15, came less than a month after delegates voted down a resolution at the Tories’ policy convention that would have inked “climate change is real” into party policy.

“I’ve been crystal clear why climate change is important to me, not just as a politician. I talk about climate change with my daughter Molly, who’s 15. And we need to make our emission targets as a country,” O’Toole said.

“My plan will meet our Paris commitments but will have vastly better jobs and investment numbers than Mr. Trudeau’s ever-increasing carbon tax.”

The Liberal plan—applicable only in provinces that do not have their own approved carbon pricing scheme—sets the price at $40 per tonne, rising each year until it reaches $170 per tonne by 2030. The stated goal is to slash emissions by at least 40 per cent compared to 2005 levels by 2030.

Ottawa’s plan could raise prices at the pump by nearly 28% over a decade, officials said in December.

The Conservative event in Edmonton also saw O’Toole highlight his proposal to boost disability benefits as part of a broad basket of pocketbook issues he’s presenting as the federal election hit day seven.

At an Alberta centre for those with intellectual disabilities, he pledged to double the annual supplement for low-income Canadians living with disabilities to $1,500, impacting roughly 90,000 people.

The increase comes alongside an additional promised hike to a refundable tax credit for all low-income workers in the Tory platform unveiled Monday, capping the Canada workers benefit at $2,800 for individuals or $5,000 for families. The payments would also be provided as direct deposits each quarter rather than as a tax refund a year’s end.

O’Toole added that federal and provincial social programs should not punish employment by clawing back relieffrom working Canadians, saying he would overhaul the patchwork of disability supports.

“Too often, when someone on disability benefits pursues work, it costs them in benefit cuts, and higher taxes,” O’Toole said.

In their April budget, the Liberals promised to extend disability supports under the federal student loans program, helping about 40,000 recipients access up to $22,000 in grants apiece.

NDP Leader Jagmeet Singh, who campaigned in Toronto on Saturday, has committed generally to expanding income security programs to give Canadians living with a disability a guaranteed livable income.