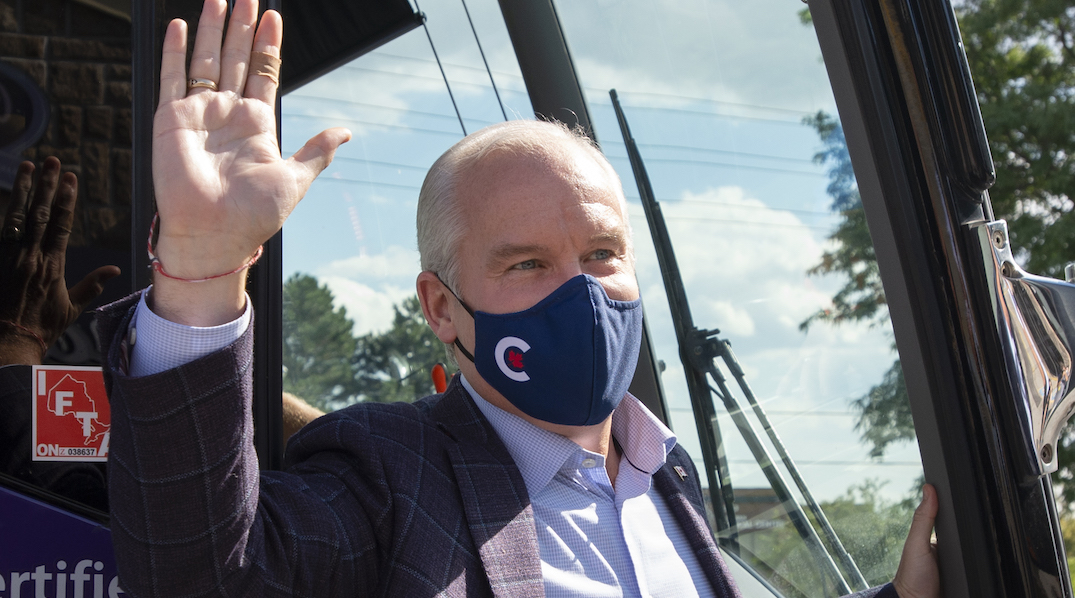 Erin O’Toole made sure that when he went to law school, he dressed for it.

While classmates at Dalhousie University sported jeans and T-shirts, one recalled O’Toole stood out for wearing slacks and a button-down shirt.

“There were a few guys like Erin, who kind of had that focused look in their eye,” said Toronto lawyer Ted Frankel.

O’Toole, 48, has swapped uniforms several times in his life, from military to law and finally to politics.

Those close to the Conservative leader say a sense of determination continues to define him, as he faces the pressure of defeating Liberal Leader Justin Trudeau after a tenure eclipsed by the COVID-19 pandemic and attempts to modernize the party, an area where some supporters felt his performance to be lacklustre.

Over the past year, O’Toole has tried introducing himself to Canadians by asking them to see him as a “middle-class kid.”

Born in 1973 in Montreal, his family later moved to Bowmanville, Ont., where his father worked at General Motors.

He suffered loss at nine when his mother, a teacher, died from breast cancer. After his father remarried, he grew up the oldest in a blended family of five kids, playing sports and sitting on his high school’s student council and graduating with an A average.

And while he may not have been a prime minister’s son, he was nevertheless the son of a politician.

John O’Toole was elected in 1995 as the Progressive Conservative Member of Provincial Parliament for Durham, where he served for nearly 20 years.

O’Toole credits his dad for inspiring him to pursue public service, which for him meant entering the military at 18 and starting seven weeks of basic training.

Michael Roach was among those who lived with him in Chilliwack, BC, in summer 1991, where he says O’Toole’s positivity meant he was often the one to break the ice during the non-stop stress of classes, exercises and drills.

“After the people would come in our room and inspect it and everyone’s standing at attention, sweating as they’re being yelled at, eventually they just leave the room _ almost inevitably Erin would crack a smile or laugh or something and you couldn’t help but do it yourself,” he remembered.

Besides that, he says, the exercises seemed to come easy to him.

“Everything seemed to be an adrenaline rush for Erin.”

O’Toole went on to attend the Royal Military College of Canada in Kingston, Ont., where he met Derron Bain, who alongside him studied economics and political science.

Bain recalls O’Toole being a serious student, who on top of requirements to be physically fit, disciplined and to learn French, involved himself in RMC life, organizing spring break trips.

“I used to laugh. A lot of times he’d run his assignments or his essays right down to the deadline or the wire,” Bain said.

To understand O’Toole, his longtime friend says, one simply needs to look at the military ethos they were taught.

While hosting some students at his home, professor Lubomyr Luciuk was struck by how cadet O’Toole carried himself.

“I was impressed by this young man who came to my home and was part of a group and never sort of tried to push himself above the rest.”

After graduating in 1995, O’Toole was commissioned into the Canadian Air Force as an officer.

Following a post to Trenton and then at 17 Wing in Winnipeg, where he was trained as an air navigator and became a member of Manitoba’s Progressive Conservatives, in 1997 he was sent to 12 Wing in Shearwater, NS, where he flew on a Sea King helicopter as a tactical navigator for naval support operations and search and rescues.

O’Toole’s knack for politics was noticed in the summer of 1999 while volunteering on the campaign for Nova Scotia Progressive Conservative Leader John Hamm.

“That was my ‘aha’ moment,” remembers Jamie Baillie, who volunteered with O’Toole, and a decade later led the province’s Progressive Conservatives himself.

“He was just so affable and persuasive on the doorsteps. People really connected with him.”

Despite Hamm’s Tories winning a majority, O’Toole stuck with his plan to attend law school. To do that, he retired from regular military service and joined the reserves.

At 26, O’Toole married his wife, Rebecca, who hailed from outside Halifax and was also involved with the provincial Tories. The couple had met two years earlier when Bain, who would later live next door arranged for them to meet at a military appreciation night at a junior hockey game.

They eventually left the East Coast behind for Toronto, where O’Toole spent the next decade building a corporate legal career on Bay Street and busying himself with charity work. The couple also started a family, first with their daughter Mollie, named after O’Toole’s mother, followed by a son, Jack.

His entry into politics seemed like a “natural progression,” says friend Ihor Kozak, who was among those encouraging him to run when, in 2012, Tory MP Bev Oda quit and her Durham seat opened.

He easily won that byelection, his last name recognizable as the second O’Toole to run in the region. As an MP, he was tapped to become parliamentary secretary to Ed Fast, former trade minister in Stephen Harper’s Conservative government.

Fast believes Harper’s pick showed trust in the rookie as Canada was in the middle of negotiating the Trans-Pacific Partnership and CETA.

And once the Conservatives lost power in the 2015 election to Trudeau, he made a play for the leadership.

“When he went into politics, I think nobody had any doubt that Erin is going to reach for the stars and go for the top,” said Kozak.

But that didn’t happen easily. His bid to become interim leader failed and he lost again in 2017 when he ran in the crowded race to replace Harper, placing third behind Saskatchewan MP and former speaker Andrew Scheer.

That’s why Baillie was surprised to see him at his election headquarters three days later in Nova Scotia, where he suffered his own defeat in that province’s general vote.

“He knew what I was going through. And he came,” he said. “We had a few cans of liquid commiseration afterwards together.”

O’Toole finally scored the party’s top spot last August after the PC-raised Ontario MP, not viewed as particularly ideological, ran as the “true blue” candidate, courting support from the party’s social conservative ranks to mark him as their alternate choice in the ranked-ballot system.

Campaign co-chair Walied Soliman rejects criticism that emerged not long after, which was that O’Toole ran as someone he wasn’t, given how, for example, he introduced a Conservative carbon price after campaigning to cancel the federal one.

When it comes to the values of the man who the party hopes can win over more Canadians, Soliman said O’Toole is authentically a family man with integrity who listens well.

“I would say he’s a little bit old school at a time when Canada really needs some old school.”