The Envac Waste Collection System is coming to Montreal soon. Would Vancouver make a good fit for the next Canadian location?The Envac Automated Waste Collection System is taking the world by storm. At its core, Envac is a waste management system that uses subterranean pipes to transport waste from portholes to a central collection location. Since first being implemented in Sweden in the 1960s, Envac has expanded its operations to have systems in over 30 countries. Such a system is currently planned for Montreal and is currently in the creation process. The Montreal system will be the first in Canada and is expected to be up and running in 2014, at a cost of around $8.2 million. Servicing the city’s arts district in downtown Montreal, the Envac system presents interesting opportunities.

This is how it works:

1. Intake hatches, called portholes, replace garbage and recycling cans for a place to deposit waste (as seen in this article’s featured image). Standing around 4 feet tall, they most often feature intakes for garbage, recycling and compost, and sit on public property for all people to use. There is also the possibility for private property owners to opt in though (be it businesses or residents).

2. There are sensors in the portholes that keep track of how much material has been deposited in the system, which is sent to a central system, whose operator can flush the trash into the system. Garbage, compost and recycled materials are transported separately by high-powered industrial fans.

3. 20 inch wide pipes lay underground, beneath the frost line to stop the pipes from freezing, and connect thousands of portholes to the overall tube network. These pipes carry the waste to its destination.

4. Industrial fans power the system, transporting waste throughout the network. Winds can reach over 45 miles per hour, which is usually high enough to prevent items from getting stuck and obstructing the path of the waste.

5. All garbage, compost and recycling will end up in a collection facility, which will divide the material into the correct bin for further transportation to another facility.

6. Based out of Sweden, the Envac headquarters will remotely operate the system (though each city has maintenance workers on board for when problems arise). 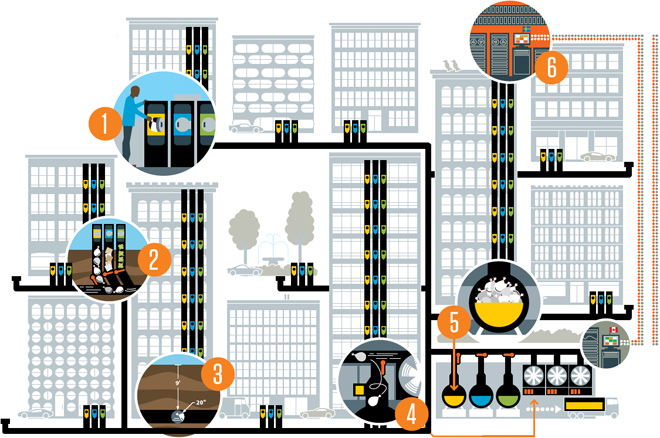 The system is definitely interesting and one that I can see possibly being done in Vancouver, especially since the system can be installed under the water table. I could definitely see this being piloted in Yaletown before potential expansion to the rest of the downtown core. With businesses and residents being given the option to opt-in, I think the adoption rate would be fairly significant if the Montreal project ends up being successful. This type of program is definitely aimed at more densely-populated areas. Not only is this idea incredibly cool, it is also innovative, more environmentally-friendly than current disposal systems, and convenient. It might even interest those who would be less inclined to recycle or compost to get on board, due to interest in the concept itself. It definitely compliments Gregor Robertson and council’s vision for a greener and more sustainable future for Vancouver.

On the other hand, while this saves from using garbage trucks to collect waste and other materials at individual buildings, which will reduce fuel consumption as well, the waste will still ultimately need to be trucked away to landfills, recycling plants and composting facilities until a better solution is established. It would also inevitably lead to job reduction in the garbage collection and recycling industries. Also interesting to think about is whether this would lead to greater bottle recycling through this method, which would decrease the money earned by bottle collectors, who are oftentimes marginalized and rely on the funds from recycling bottles to make it by. What are your thoughts, would you like to see a similar system implemented here? Do we have the infrastructure needed to accommodate such a program? Let us know below!