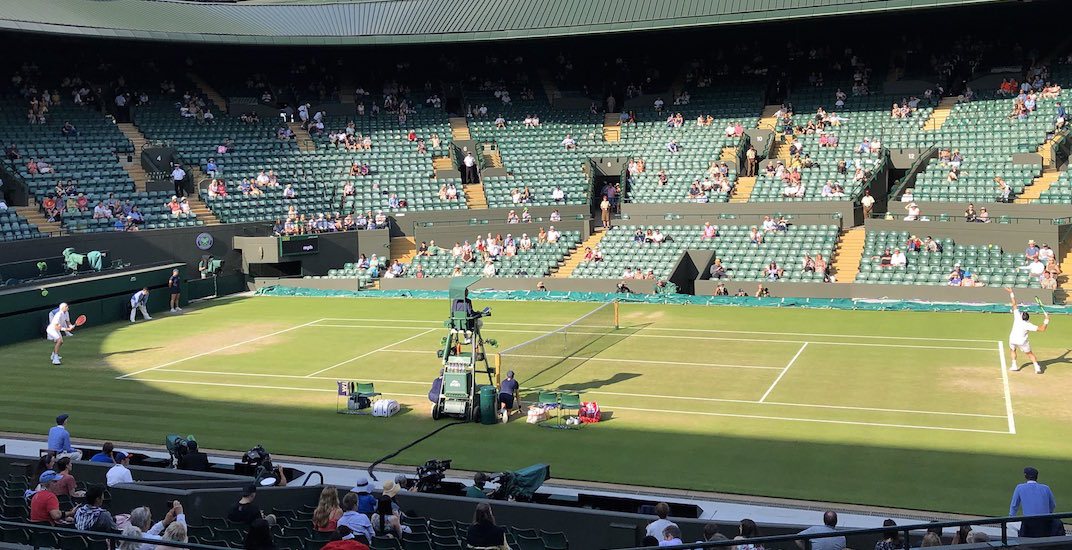 The biggest tennis tournament in the world was upstaged in its own country.

The men’s singles quarter-finals at Wimbledon began on Wednesday, but hardly anyone cared – at least for matches that took place during the World Cup semi-final.

You see, England was playing its biggest match in 28 years, against Croatia, for a chance to book their ticket to the FIFA World Cup Final. The eyes of the nation were glued to the semi-final match, causing many to stay away from the All England Club.

It’s an issue that Wimbledon anticipated, given that this was the scene during the Round of 16:

The perils of having a big screen TV clearly visible in your front room on the walk home from @Wimbledon … pic.twitter.com/EVvrGGsMM1

The usually strict All England Club even relaxed its rules regarding cell phones, allowing fans to stream the soccer game from their seats – provided they didn’t bother anyone.

Nobody cares about the tennis match at Wimbledon right now #ENG pic.twitter.com/YaJatg5UD6

Fans showed up in large numbers to see Roger Federer, whose match was expected to end well before England and Croatia got going.

That was until Kevin Anderson staged an epic comeback, winning 13-11 in a marathon fifth-set. The match took four hours and 48 minutes to play, nearly conflicting with the soccer match.

It prompted this desperate plea from one fan:

“I need to watch the football” what a shout 😂 #Federer #federeranderson #Wimbledon pic.twitter.com/AuxCMNHxC1

Anderson wrapped things up just in time, causing a near-stampede of fans exiting Court 1 for the nearest television.

"There is a mass exitus from #Wimbledon's Henman Hill right now as apparently there's a big match coming up." #WorldCup #ENG #ENGvCRO pic.twitter.com/QkZw6youdi

This is the kind of passion that the English have for their team:

Following Federer-Anderson on Court 1 was Canada’s Milos Raonic, who took on John Isner of the United States in one of the other quarter-finals. The match completely overlapped the England-Croatia showdown, so this was the result:

After that epic match, and with England’s World Cup game starting shortly, there are approximately 15 fans left in attendance for John Isner-Milos Raonic. pic.twitter.com/NLzFYVxaln

Where is the crowd for Isner vs Raonic match man? 😂😂😂 Y'all are so mean for going out. pic.twitter.com/l6mXutpwFo

Instead of a packed crowd to see a marquee match, the seats were nearly empty.

How bad was it? Wimbledon officials eventually allowed fans without Court 1 tickets to come and enjoy the match.

Croatia, and Isner (if you care), won their respective matches, by the way.