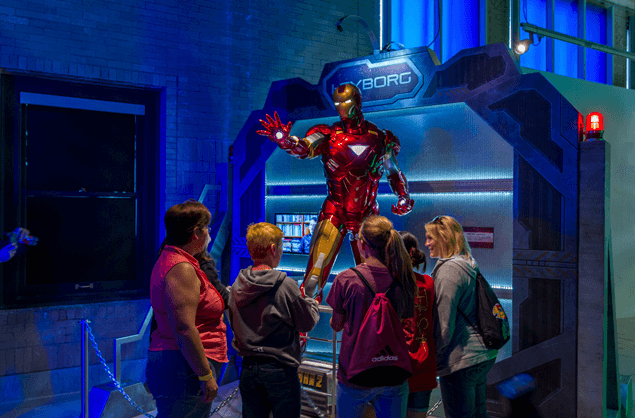 At 12:30am last Thursday at Venue, the DJ slows the music down, the beat steadily freezes and the crowd’s screaming takes over the club. The lights dim, and just when you thought it couldn’t get any louder, a packed audience erupts as the highly praised EDM vocalist, Emma Hewitt takes the stage.

Playing to a sold out event, Emma’s appearance on stage captures her style and grace; casual yet poised. Dressed in a black tank and galactic tights, she slides across the stage with ease, pumping the crowd with excitement. She rocks her signature hair-do: short hair and side swept bangs, with flawless makeup to complete her look. The crowd is getting restless; and then, Emma’s voice hits the mic.

“Not Enough Time” was the first track of the night (my requested track of the show!) and it definitely got everyone going. In between the music, Emma switched things up and while we were expecting all and only Emma Hewitt’s music, she sang the classical “Rapture” by Nadia Ali. She sang some of her biggest hits- including “Disarm Yourself”, mixed in with “Sun and Moon” (which caused a massive eruption of cheers in the crowd), along with “Calm Down”, “Live Forever”, “Be Your Sound” and “Colours”.

Emma’s confidence definitely radiated throughout her performance. She wasn’t afraid to get up-close and personal with the audience- she always had her hands out for fans to grab, and got down on her knees so fans could hug her. Some fans got a little too excited though: some jumped onstage (almost interrupting her performance) just so they could get a hug and picture. Although Emma was caught off guard in these moments, she kept her cool and welcomed hugs and pictures, even while singing mid-song! I wish I was able to hear her a little better- the bass was vibrating throughout the stage and took away from her vocals; Emma was clearly fidgeting with the mic to get a clearer sound.

Overall, the show was extremely energetic. Emma closed the show with a very exciting performance of “Waiting”, which the crowd sang along, and her latest hit, “Miss You Paradise”, which was the cherry on top of a fun-filled and enthusiastic night. Crazy fans and intense baselines aside, Emma Hewitt sparkled throughout the night, proving to Vancouver that her angelic voice and energetic performance makes her the trance goddess that she is.