It’s that time of year again. The Emily Carr Grad exhibition or Grad Show is upon us and here I am writing about it about a week after it opened. You would assume that a blogger would be a bit more timely but, I have to admit I had a bit of trouble distilling my thoughts about this year’s showing. I don’t even know if I have even reached a conclusion at this point but, in truth I don’t know if I really ever can. So I gave myself this time to see the show, and see it again, and then see it yet again. And here is where I’m at.

Normally I don’t have much trouble forming an opinion on my own. That’s the sort of creative license I get to enjoy on my own blog. But this time I wanted to take enough time to reflect before I sat down to pen this article. I won’t pretend that I didn’t have a strong opinion the first time I saw the show but I decided to keep it to myself at the time so I could concentrate on other peoples’ sentiment. I took my time to read all the literature on the walls and posters and I really did my best to fully understand each project. Then I invited other people to walk the show with me on two other occasions so I could hear what they thought while I remained silent. The consensus was the same. I’ll get to that in a moment. 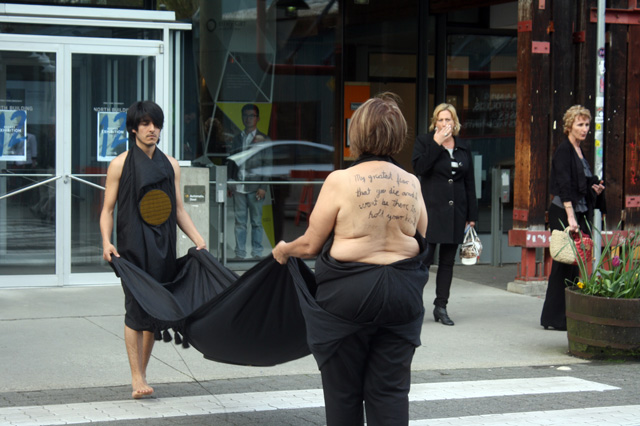 What makes the annual grad show such an interesting event is that you never know what’s in store. It draws such an enormous crowd of people who are hungry for that culture which Vancouver has been known to lack. The attendees seek out different things from the beautiful to the surreal to the downright bizarre. And frankly, whenever I visit the show I hope to have my head turned by something that really makes think in a way I’ve never thought before. And that has been the case over the last three years. This year was no exception but it was for different reasons.

The opinion I took away from this year’s showing was that, really, the grads who exhibited were perhaps a bit less daring than years prior. In the design exhibit, the finish and polish was rather apparent. The exhibits looked pretty good and I’ve never seen so many projects with such well shot TV spots accompanying their products. I would say that if I was a client, this is what I would expect of a contract designer. But therein lies the problem.

Design school, to me, is this sort of shangrilah of potential and exploration. I’ve had the opportunity to take part in this and also watch other students grow and push the boundaries of the craft. The first lesson I learned in design school was this: Try your best and don’t be afraid to fail. And if you do fail, do so spectacularly. This simple paradigm helped to blow away any hesitation inherent in my class. And this is so important. You have to be experimental and a bit reckless in order to find yourself. That is the beauty of art and design. It’s one of those rare practices that allows you to express who you are. And, it’s the designers and artists who know how to do this unapologetically who tend to make the biggest waves. 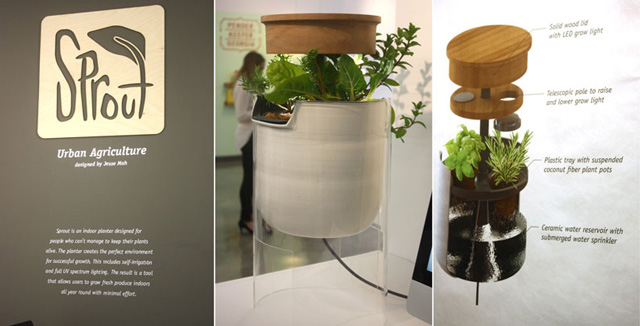 But what happens when, maybe you don’t quite know yourself well enough to do the above? You do what’s safe. And this is what I saw this year to be rather honest. Now, don’t get me wrong. I’m not saying the show was bad. Far from it. But the general feedback was that this class was rather young. It’s mostly made of kids who made the jump to college right out of highschool. The results of this is evident. I saw very well presented work with particular attention paid to the graphic design elements but not a lot of concepts that were provocative or fresh. This time around I felt there were more Comm Design pieces than anything else. This may or may not have been merely my perception. But it is also true that a good number of the Industrial Design students chose not to exhibit for various reasons. That made me a bit sad. But I could understand. Design school is no picnic. And scrambling to get ready for the grad show when you’re already burnt out is pretty daunting. Here’s an embarrassing fact: I’ve heard rumors that my grad project has been used by faculty as an example of how not to go about setting up your exhibit. Ask any of my classmates and they will tell you all about how my exhibit materialized quite miraculously on the eve before preview night much to the awe of my neighboring exhibitors. Even I couldn’t believe I pulled it off. I now have a couple of grey hairs to commemorate that night and a special place in my heart for a certain few who came to my rescue and who I will always be grateful to. You know who you are. I love you guys, goddammit.

I’ll let you in on another little secret. I know something that not everyone else knows about this class: they are super motivated. Sure, it could be implied that there may have not been any stand outs in this crowd; no genius. But I know what true genius looks like. And, it doesn’t necessarily have everything to do with talent or brains. I’ve said it before: what sets apart the culture makers from the rest is as simple as this: discipline, hard work and passion. I’ve seen these qualities in the class of 2012. They’ve done more to help unify the upcoming design scene than any previous year. Many of the projects were cross discipline collabs. And, this class even established a design society, the ECIDA (Emily Carr Industrial Design Association) within Emily Carr that helped bridge the gap between them and alumni. Me and my peers had more opportunities than ever before to visit the studios again and see these projects develop. This is unprecedented.

Give the kids a little time and we will soon see them blossom. I think something very important is unfolding from within the design studios and it’s going to galvanize with each passing year. The real story here, ladies and gentlemen, is the signs of what I’ve been on about since the inception of this blog. It’s the coming industrial and economic revolution of Vancouver. And it’s going to be ushered in on the efforts of the young and focused. Its you. It’s me. It’s every graduate who makes it out the other end of ECU or AI or VFS or UBC and then sticks around to help construct the network of design professionals and clientele that will make this city the next destination for culture on the West Coast. Things bloom here at a comparatively slower pace than back East. But, when they do it’s of a brilliance seldom rivaled. The beauty of Vancouver is not just about mountains and greenery. Look again, it’s the spirit of the west. It’s the people. Don’t count us out.

For me, this was best in show. Darcy really pushed the boundaries of ceramics and mold making with his complex and beautiful set. Every part of the mold was used in different configurations in order to make all these shapes. Don’t miss this. 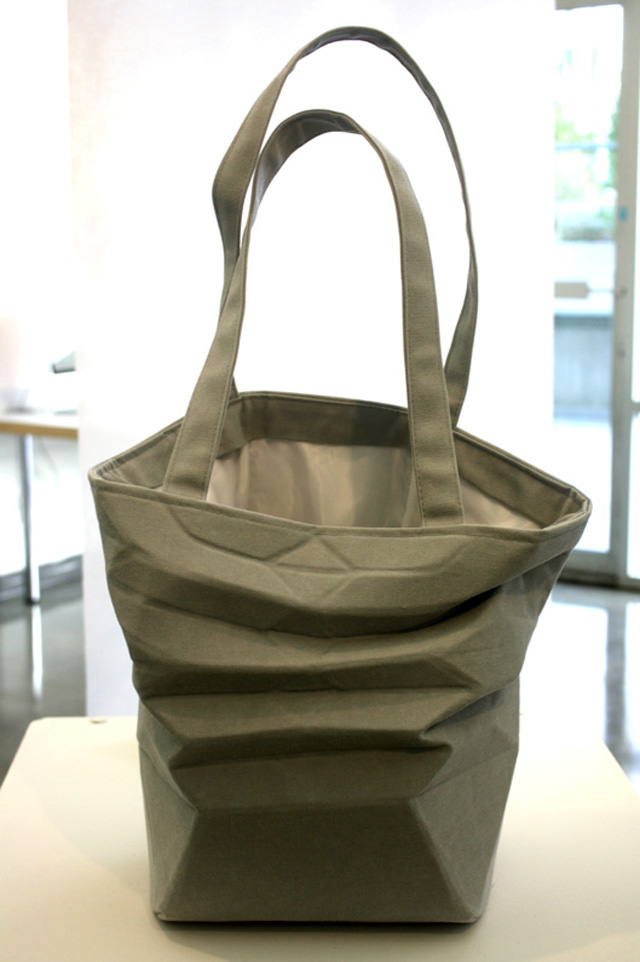 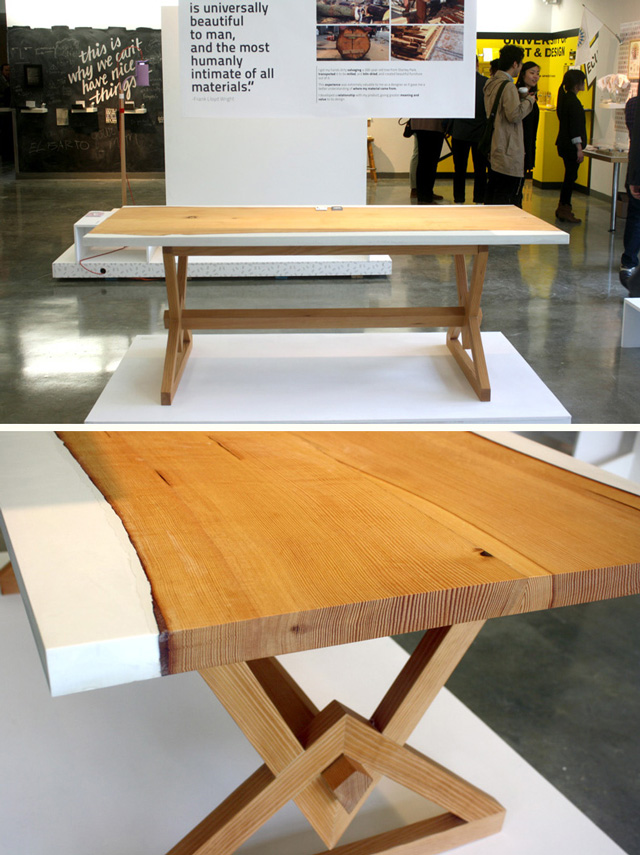 I really liked the details on this piece. The legs in particular are pretty intricate. The top is nice but I believe I’ve seen this resin cast edging done before by some local woodworkers. This is a project taht doesn’t necessarily solve a problem but it’s still a beautiful object in of itself. It would be nice to see a grander piece. In any case is beats the gym sock furniture adjacent (not pictured). No, I’m not kidding. 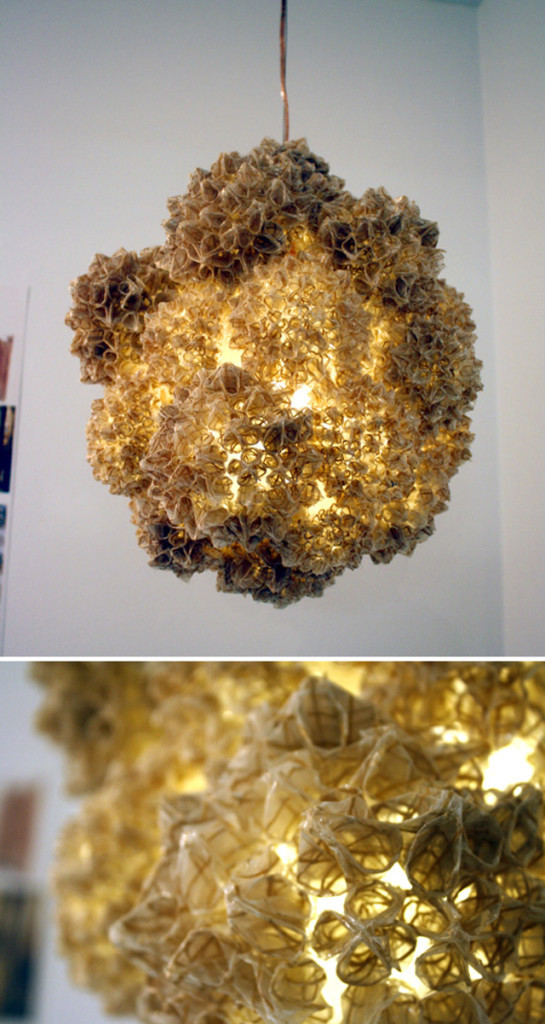 A light made from bits of sail. 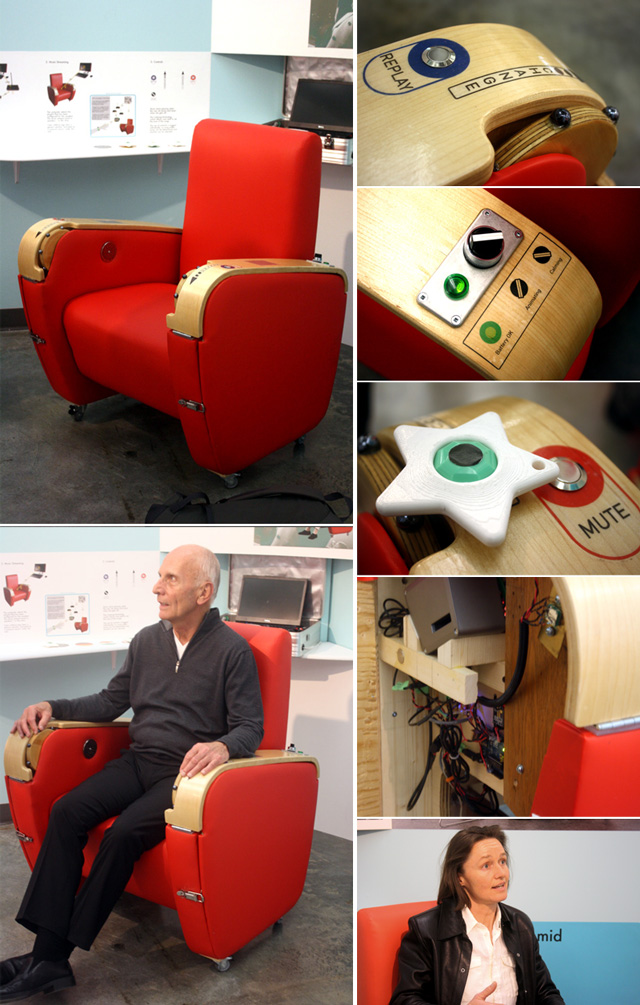 Irene shows us how a designer works a lot like an amoeba in that you have to know how to assemble a team of experts when there are aspects of a design that are really too technical to master in a short time period. This chair is meant to help treat seniors with dementia by recognizing the user by way of an RFID bracelet and the sitter’s body weight and then playing a selection of music that is familiar and may be attached to memories. The sheer amount of different processes and skills Irene had to call upon to get this done is pretty amazing. 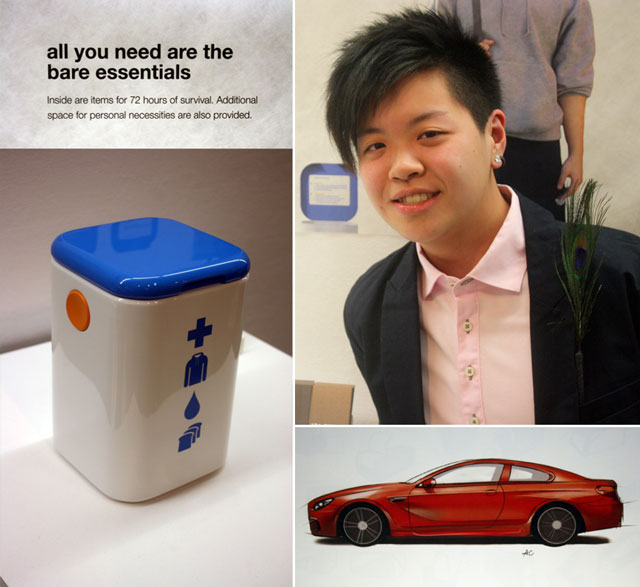 Design consultancies: watch out for Ada. She’s got the skills and it shows in her presentation.

Another woodworking project with some really neat details. The seat pan is particularly comfortable. 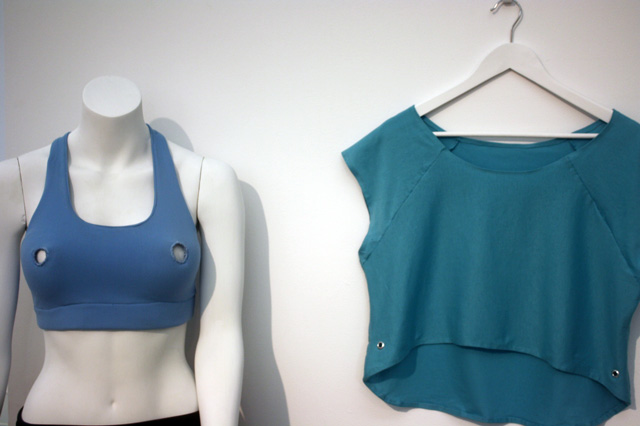 I noticed that a good number of female students chose women’s issues as a subject to explore in their projects. I’ll let you guess what this project is about. Visit this exhibit and draw your own conclusions and let me know what you think.

One of the Master’s student’s research projects. Still, I would have liked to see a bit more interesting form exploration.