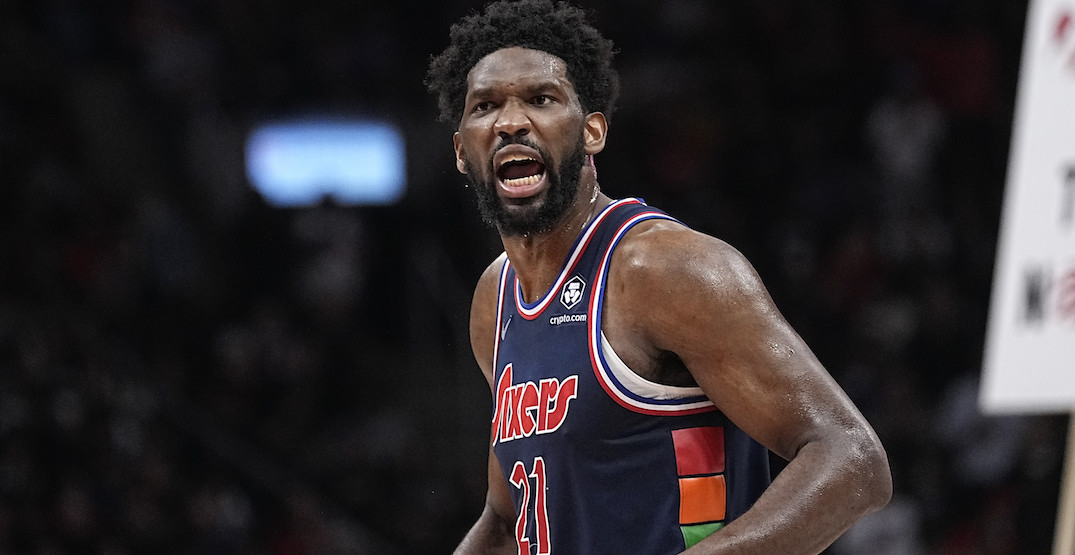 It appears Joel Embiid will attempt to play through an injury when the Philadelphia 76ers try to sweep the Toronto Raptors on Saturday.

The MVP of the NBA this season, in the opinion of many, Embiid is dealing with a possible ligament injury, according to ESPN’s Adrian Wojnarowski.

Shams Charania of The Athletic adds that he may have a torn ligament in his thumb but that Embiid has “vowed to continue playing through the injury.”

“Joel Embiid is experiencing pain and discomfort in his right thumb,” said ESPN’s Ramona Shelburne, adding that he could get an MRI soon.

There is fear that Philadelphia 76ers All-NBA star Joel Embiid has a torn ligament in his right thumb, but Embiid has vowed to continue playing through the injury, sources tell @TheAthletic @Stadium. Embiid will rely on his pain tolerance and 76ers‘ medical staff.

Further testing would give the Sixers and Embiid a clearer picture on a possible ligament injury. https://t.co/XhWgJxc6TS

It’s unclear exactly how Embiid hurt his thumb, though many have speculated that it came from this thunderous dunk in the third quarter of Game 3.

Here’s a look at what Joel Embiid has on his wrist, same as after the game the other night. Doc Rivers told us he practiced today and is good, and Joel outright dismissed the idea that he’d miss G4 because of it pic.twitter.com/0KW1N84pFn

Embiid did practice and is expected to play in Game 4. But it doesn’t appear he’ll be at 100%.

Philadelphia’s seven-foot centre has been a beast in this series, averaging 27.7 points, 13 rebounds, and two assists per game. He’s the 76ers’ most dangerous weapon, so clearly, any sort of ailment he’s dealing with does provide a glimmer of hope for the Raptors, who are trying to become the first team in NBA history to win a playoff series after trailing 3-0.

The Raptors won’t feel sorry for the 76ers, as Toronto has been hit hard by injuries in this series too. They’re still playing without Scottie Barnes, who they lost due to injury in Game 1. Gary Trent Jr. has also missed time due to an illness.

Game 4 goes on Saturday at 2 pm ET/11 am PT at Scotiabank Arena in Toronto. If the Raptors can stave off elimination, they’ll push the series back to Philadelphia for Game 5 on Monday.