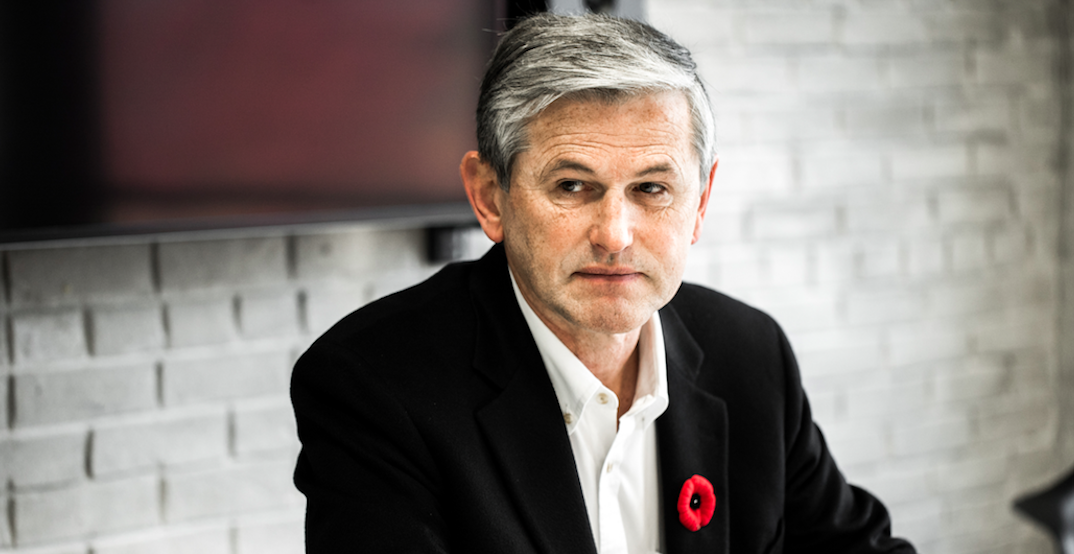 By now, BC residents have started receiving mail-in electoral referendum ballots from Elections BC, asking whether or not there should be changes to the way the province conducts provincial elections.

But in the mind of BC Liberal Party leader Andrew Wilkinson, there are fundamental issues with the whole process.

“The right to vote in a fair election is not something that political parties should be monkeying with at all,” he said.

Wilkinson made the comments during a sit-down interview with Daily Hive this week, just days before he’s set to square off against Premier John Horgan in a televised debate on the issue.

He called the mail-in ballot a “multiple-choice exam written by John Horgan,” and questioned who gave Horgan “the authority and the power to tell us what the options are?”

He also took issue with the wording and what’s been perceived as a lack of clarity when it comes to the choices presented on the ballot for the average voter.

“We’re getting people who are confused to no end about this government form they’re supposed to fill out,” he noted. “This should be obvious to everybody.”

The ballot itself includes two questions: Would voters like to keep the current system, known as First-Past-The-Post (FPTP), or move to what’s known as Proportional Representation (ProRep)? For those who choose ProRep, the ballot then asks what type of ProRep system they would like to see and offers three choices.

So does Wilkinson even understand what the options are?

“I can talk with some substance about all of it, but it’s kind of diagnostic of the problem when someone like me who went to school for a long, long time has to cram for the exam just before I write it,” he said.

So with people calling for a change to BC’s voting system and process, what would Wilkinson do differently if he were in Horgan’s shoes?

Wilkinson pointed to the Citizen’s Assembly in 2004, and called it a “good model” for something like this.

“They had people from all over BC selected at random… until they came up with about 200 people who gathered in Vancouver to go through this,” he explained. “They had all the necessary academic support to figure out how it would work, and their mission was to find a single yes or no question that would go on the ballot during a general election when everybody is paying attention.”

Asked about what his plans were for the debate on the subject this Thursday, Wilkinson responded, “We’ll see where it goes.”

The “unfortunate” part, he said, is “because the Horgan cabinet wrote this multiple-choice question and it’s difficult to get their head around, it’s up to him to make the explanation.”

Calling it a “mistruth,” Wilkinson –who replaced Christy Clark as party leader after the Liberals lost the 2017 election – responded to a claim by the NDP this week that Wilkinson himself would not have been chosen party leader if it wasn’t for a ProRep system within the party.

“We had an alternative voting system for the leadership, which is how leaderships are done everywhere in the world to make sure that whoever runs actually has a majority mandate by alternative voting,” he said. “It is not a proportional representation system.”

And while he may not like how it’s been rolled out, the fact remains that the referendum is currently underway, with ballots due back by November 30. With that in mind, which voting system does Wilkinson think is the best?

“I think there’s an opportunity to review about a dozen different systems that are used in various places,” he said. “We should not be experimenting with our democracy by using these systems that… aren’t used anywhere, so there’s a big onus on [the NDP] to say why these three [options] were chosen.”

He added that it’s not his role to pick one of them. “That should be left in the hands of our citizens as voters, because it’s their constitutionally guaranteed fundamental right to be involved in the electoral system.”