Coffee drinkers: There is a cup that can let you have your drink and eat it too.

The edible coffee cup is actually a legit thing, and it is being introduced soon to consumers by a major multi-national fast food chain.

That’s right…the folks behind other culinary wonders like the Double Down Dog (not a yoga pose, but rather a chicken hot dog whose “bun” is actually a fried chicken patty) are also pioneering mass-produced edible coffee cups. 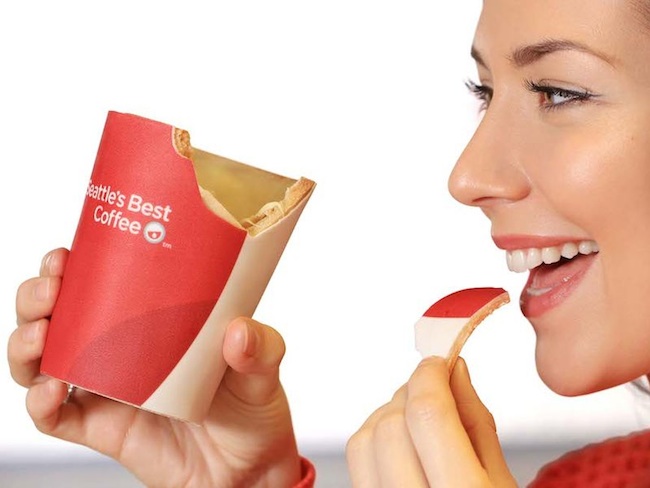 “Mmm, this cup is delicious!” Photo via KFC

USA Today reports on this latest wonder of food science:

It’s called the “Scoff-ee Cup” and KFC is developing a range of edible cups in conjunction with the launch of Seattle’s Best Coffee in its U.K restaurants. It’s not yet on sale, but KFC says it hopes to bring them to some U.K. stores this year.

In a bizarre added feature, the Scoff-ee cups also boast “ambient aromas” like wildflowers, cut grass, and suntan lotion, in order to evoke a summertime sense memory. Perhaps before they hit the market those aromas might be tweaked to be of something people might want to eat, like “doughnut” or “almond biscotti” instead of a lawn. (“Fried chicken” might be the obvious one, but also as ill-advisable as coconut-y sunscreen.)

Speaking of lawns, or, at least of all things green: “This type of edible packaging is definitely aligned with the global consumer mind-set in terms of sustainability and simplifying their life,” Shilpa Rosenberry, senior director of global consumer strategy at Daymon Worldwide told the New York Times.

Well, hello! Vancouver is a city full of that exact consumer. And we also happen to love (love, love, love) our coffee here. Perhaps we should be the next place to get these cups.

Granted, that will mean having to get coffee at KFC, and KFC locations are less prolific in Metro Vancouver than some other chains.

Sadly, there are no plans to bring the edible coffee cups anywhere but the UK. Maybe one of our local coffee or fast food chains wants to get in the lab to come up with some edible cups of their own.