Players get traded in hockey all the time, that’s just part of the business. Sometimes the deals are good, sometimes they’re awful, but either way it’s usually pretty hard to fully evaluate them until years later.

So while it might look like a bad deal initially to trade away the younger Eddie Lack and go with the older, more expensive Ryan Miller, who knows how we’ll look at this deal five years down the road. For all we know, Jacob Markstrom will turn into the next Lundqvist, and Eddie Lack will reveal he was three Oompa Loompas under a long trench coat the entire time.

Hockey has several sides to it, however, and one of the biggest ones is the emotional side. So while I would never suggest keeping a player because “he’s a nice guy”, the city has lost a truly genuinely nice person in Eddie Lack. Sports can somehow become more enjoyable when you truly like and respect the person you’re cheering on. So while Ryan Kesler still would have had a statue of him built if the Canucks had won in 2011 (despite not having a particularly warm relationship with the fans) there is something to be said about watching a player win who has that a bond with a city they play in.

Enter Eddie Lack, professional nice guy who happens to play hockey. I met Eddie back when I was just starting to write about sports, back when Eddie was playing with the Chicago Wolves, then the farm team of the Vancouver Canucks. This was back when bloggers asking for a press pass was akin to telling your mother you wanted to be a professional video game player when you grew up; they’d kind of look at you funny, then tell you in a hollow voice “one day honey, one day”, then turn to look out the window, trying to figure out where they’d gone wrong raising you.

Ok can this baseball thing get off my channel guide? You're kind of in the way…. #thankyou #donotunderstandyou

Luckily the Abbotsford Heat, either through want of more coverage, or maybe they were just super blogger progressive, started handing out press passes to the “lowly” bloggers. We greedily accepted it because, hey, free hockey and free popcorn, that’s a bloggers dream! We rubbed elbows with Dave Babych in the green room before games and got a free meal! We were living the high life being treated like normal human beings.

What was even better was the interest in the Canucks farm team being at an all time high because of the 2012-13 NHL lockout. This meant any time the Wolves came through town, we bloggers would trek out to Abbotsford to cover the farm team. I went an extra step and tried engaging with the Wolves players through Twitter, in the faint hopes of landing an interview with a player or two. Surely they would appreciate another person struggling to make a name for themselves in their chosen craft! This was when I first encountered Eddie on Twitter.

What struck me about Eddie was just how normal he was.

Ebbett is on fire. Just want everyone to know I kissed his stick for Goodluck before Saturdays wolve game. #magicstick

I eventually did some funny photoshops of Eddie (I can’t even remember what they were anymore, probably something like Eddie riding a unicorn while brandishing a flaming sword) and he eventually followed me back.

I began chatting with him, and then in an act akin to throwing up a Hail Mary of a pass at the end of the game, casually asked if he would appear on my friend and I’s podcast. Oddly enough, Eddie said yes. Even odder, he agreed to do it in person. But that was Eddie. Just being nice because that’s how he was raised.

So we did the podcast, and Eddie, who was rehabbing from a hip inury, came over despite having to taxi cab his way from Burnaby to UBC. Not that this should be painted as a heroic “Oh my god, Eddie took a taxi to go somewhere!!”, but just to point out that at this point Eddie still barely knew me, but he still took a long boring cab ride after a couple hours of hip rehab, to appear on some bloggers podcast. Which is pretty darn nice.

We shared food, Eddie sang Meatloaf on the podcast, and I got to learn firsthand just how competitive Eddie is. While playing a game of FIFA on the Xbox, Eddie began taunting me with a stream of trash talk so vile, so intense, that I began questioning myself as a human being. Did I even deserve to live? Why was Eddie so mean?? Why couldn’t I score??

He smashed me in FIFA, and towered over me, gloating in his victory, high-fiving MY friend, the traitor. Then we played a game of NHL, and it was my turn to gloat. I trash talked him back, and had a solid 8-0 lead. With under 10 seconds to play, however, Eddie got a breakaway, and proceeded to score to make it 8-1. I turned to him, ever the humble victor, to offer up a handshake on games well played. Much to my surprise, Eddie was standing up, spiking the controller in victory, screaming in celebration of his goal. It was if he had just won the Stanley Cup in my house, and he began informing me of the “last goal wins” rule that I was not aware of.

Thanks Wyatt for having me over! Work on those FIFA skills for next time. And remember, the last goal always win. #hjalmarsson @TheStanchion

It was all in good fun, but make no mistake about it, behind that nice guy persona is a person driven to win. Don’t believe me? Eddie once beat an undefeated sick child at video games. From Jason Botchford earlier in the season:

Just last week, EA Canada took him on a six-hour tour playing NHL 15.
One stop was Canuck Place, a hospice for terminally ill children, to
play, well, kids. There, Lack scorched one named Ben. The same Ben
whose own claim to fame is that he never loses. At any video game.
Ever.

Except when Lack showed up. It was 7-3. There was no mercy.

Ben, by the way, loved it. He was left calling for a rematch. He’s
already got his fundamental life lesson, courtesy of Lack. Nothing
comes easy.

Eddie obviously knew the feel of the room, but it just shows Eddie being Eddie. Winning people over and winning games at the same time. And underneath it all, that driving passion of being the best he can be.

After the night of the podcast, Eddie quickly rose through the Canucks system thanks to the Luongo and Schneider drama. Instead of fighting to be the starting goalie for the farm team, all of a sudden Eddie was the backup once Schneider left town. Before you knew it, Eddie was the starter once Luongo left town. At this time I was a proud owner of a Canucks press pass, so it was as if we had both risen up through the system together in our dreams of making the pros.

Despite the Canucks PR machine clamping down on Eddie (no more podcasts allowed with “lowly” bloggers), and me being in a position where I had to criticize him if he played poorly (which he would jokingly bug me about), Eddie remained a friend and continued to treat me with respect. It’s easy for a player to zone out when dealing with media scrums, and to go into “110% mode”, but Eddie would always chat with people after the scrums ended, talking to people about football, or about something they had chatted about last week. Again, this isn’t earth shattering stuff, but it was just a nice touch for a pro athlete to not treat every interaction like you were slowly crippling their soul.

Even when Eddie was traded, he tried calling me to tell me about the deal, to give me the inside scoop to help me out (Sadly I was fast asleep. Once a blogger, always a blogger). Again, it just speaks to his personality that even during a tumultuous time for him, he was still trying to help people out. And again, that’s just Eddie, always willing to lend a hand.

You only have to look at this family to see where he gets it from. If it isn’t his mom on Twitter meeting fans around the arena at games to say hello, it’s his dad wishing his son would remain a Canuck at this year’s draft: 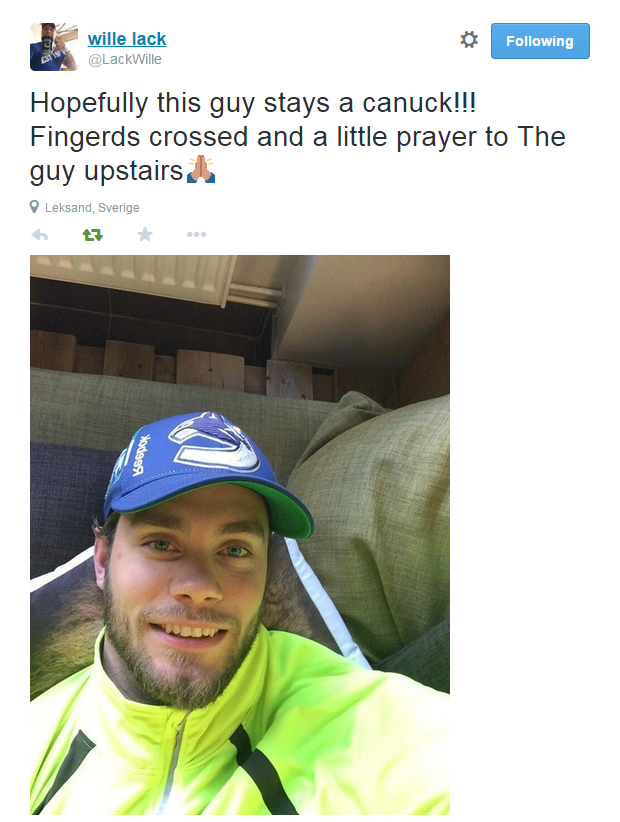 In a world in which we often see athletes in the news for all the wrong reasons, there was something charming about watching two hockey parents cheer on their son as he chased after his NHL dream. It only cemented the bond the city had with Eddie with the way the entire Lack family openly embraced Vancouver. There is a reason Eddie had the entire city chanting his name in such a short time. Eddie connected to Vancouver because he was just being Eddie, and people embraced the honesty of it all. Anyone who has run into Eddie in Vancouver, or talked to him on Twitter, probably has a fond memory of him.

NHL hockey is a business at the end of the day. The Gretzky trade taught us that. I think why Eddie connected with Vancouver so well is because he made people forget the business side of it. He really, truly loved it in Vancouver, and in a market where goalies get eaten alive, that was a remarkable thing to see. But that was just the way Eddie was. Usually smiling away, cracking jokes, then heading off to learn some new Buddhist ninja technique he had read about to help his game. He made people want to see him win, because that’s how we want the universe to work, that nice people should get ahead in life.

So while you can’t truly judge the outcome of the trade yet, Eddie’s legacy in Vancouver will stand as a testament to the strong bonds athletes can make with their fans. Ryan Miller oddly enough might find himself having to fill Eddie’s shoes next season.