National attention is beginning to turn to a proposal by TransCanada to build a cross-country oil pipeline from Alberta to the East Coast.

Dubbed the Energy East Pipeline, the 4,600-kilometre-long pipeline would extend from an export plant near Edmonton and wind its way through Saskatchewan, Manitoba, Ontario, and Quebec before arriving at a refinery in Saint John, New Brunswick, where it will be shipped to overseas markets. On its way to the East Coast, the pipeline will pass through the cities of Montreal and Quebec City.

Part of the pipeline already exists as proponents are planning to convert an existing natural gas pipeline for the transportation of crude oil. New sections of pipeline in Alberta, Quebec, and New Brunswick would be required to complete the route. 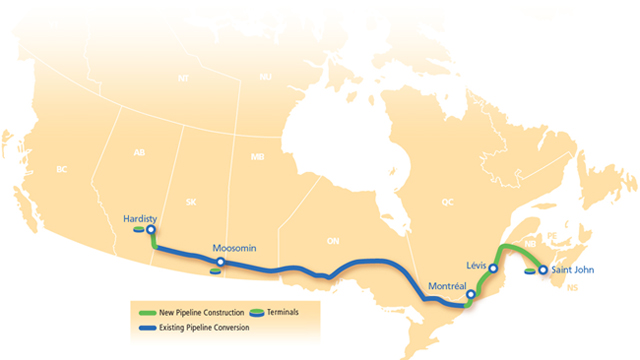 The $15.7-billion project has been in the planning stages for years but has been overshadowed by the much-opposed proposed pipeline projects to British Columbia’s coastline.

On Wednesday, the Calgary-based company announced that it had signed a major multimillion dollar agreement with ABB Canada to construct 22 prefabricated, modular electrical enclosures for the pump stations along the Energy East Pipeline. As a condition for regulatory approval, the pump stations will be manufactured in Montreal, creating 120 direct jobs in the city and an additional 90 indirect spin-off jobs for the province.

These pump stations are used to maintain the pressure required to move the heavy crude oil through the length of the pipeline.

“We are already very active in Québec, spending $100 million in contracts with more than 250 suppliers over the last three years alone,” said John Soini, president of the Energy East Pipeline Project, in a statement.

“This includes $25 million in service contracts in preparation of the project. We look forward to continuing to work closely with Québec suppliers as we develop the project and will work to develop further opportunities.”

Dependant on approvals by the federal government and National Energy Board, construction on the pipeline could begin in 2018 for operational usage by 2020. Prime Minister Justin Trudeau has not provided a position on the project, although his office is currently in the process of reviewing the Harper government’s “flawed” pipeline application procedures.

Proponents maintain that pipelines are the safest and most efficient way of transporting oil and that such a project will create over 3,000 short-term construction jobs in Quebec, generating $972 million in tax revenues for the province. Another $1.2 billion in tax revenues will be generated for Quebec over the first 20 years of pipeline operations.

With Alberta’s provincial recession worsening, a direct result of the historically low oil prices, there is growing pressure for the provincial government and its natural resource companies to get Albertan crude to other markets.

But British Columbia’s resistance, largely represented by First Nations and environmental groups, to the Kinder Morgan and Northern Gateway proposals have delayed the projects by years.

Last month, Premier Christy Clark announced that her government will not support Kinder Morgan project as it had failed to meet the criteria established by the province. Just days later, the B.C. Supreme Court sided with two First Nations groups that proponents had failed to consult on the project with local aboriginal groups. This could further delay the project, which has received a federal permit with 209 conditions in 2014.

And last fall, shortly after Canada’s federal election, U.S. President Obama Barack Obama confirmed that his office would not support TransCanada’s Keystone XL oil pipeline from the Alberta oil sands to Texas and the Gulf Coast.

Opposition is also growing on the East Coast over the proposed East Energy Pipeline project. Environmental groups are mobilizing their resources to begin a new anti-pipeline fight on the other side of Canada, and municipal governments in the Montreal region have made public their opposition given that the potential environmental costs are far higher than the economic benefits.

Pipeline approvals are solely within the jurisdiction of the federal government.