Halfiax resident Earl Grey wants to be the Prime Minister of Canada. He is also a cat.

The five-year-old domestic longhair is running in the upcoming Federal Election as the head of Halifax’s Tuxedo Party of Canada, and looking to make a difference in lives of animals across the country.

“Animal cruelty in this country is a serious problem,” Hugh Chisholm, Earl Grey’s owner and campaign manager, told Vancity Buzz, addressing the fact that Canada’s Central Animal Cruelty Act has gone without serious revision since first being enacted in 1892. “We’re lucky here in Nova Scotia because our Act was rewritten and we’ve got special legislation here now. Federally there are provinces where there is little protection for animals, and especially things like farm animals.”

Chisholm has been on one feline campaign trail or another since 2012, when Earl Grey’s brother – the late Tuxedo Stan – ran for mayor of Halifax. He says the impetus for the first election was to draw attention to the city’s feral cat problem, which had gone unaddressed for so long.

“At the time we thought it would be great, that we’d get some local media coverage. If we got a couple hundred Facebook likes we’d feel like we were doing a good job,” says Chisholm.

Following a local news story, Stan’s campaign was picked up by provincial media, then national media and then international media, being reported on by broadcasters like Anderson Cooper and Ellen DeGeneres.

Unfortunately, following the mayoral election, Stan passed away. Luckily, Chisholm says his brother was more than up to the task. When the Nova Scotia provincial election rolled around, Earl Grey was on the ballot.

While a cat running for office might seem ridiculous, the Tuxedo Party has made huge strides in the fight for animal rights and protection. Following Tuxedo Stan’s bid for mayor, the Halifax City Council donated $40,000 to a local shelter for upgrades to their animal surgery suite, as well made plans for the creation of a Domestic Animal Advisory Committee.

After Earl Grey’s provincial campaign, changes were made to the Animal Protection Act in Nova Scotia, expanding it to include cats, both domestic and feral. Chisholm says that using their candidates as the faces of their cause has allowed the Tuxedo Party to make the troubling and upsetting realities of animal cruelty more visible to the public.

“Successive governments have tried to upgrade the animal cruelty act, and for a variety of reasons it’s always died before it’s gone into legislation. It’s really tragic,” he says. “By doing it in a lighthearted way, it’s a great way to get people’s attention, and if it’s cloaked in a humourous outer exterior then it’s something that people pay attention to. There’s a lot of sad pictures on Facebook that people don’t want to look at. They just bypass because it’s upsetting.” 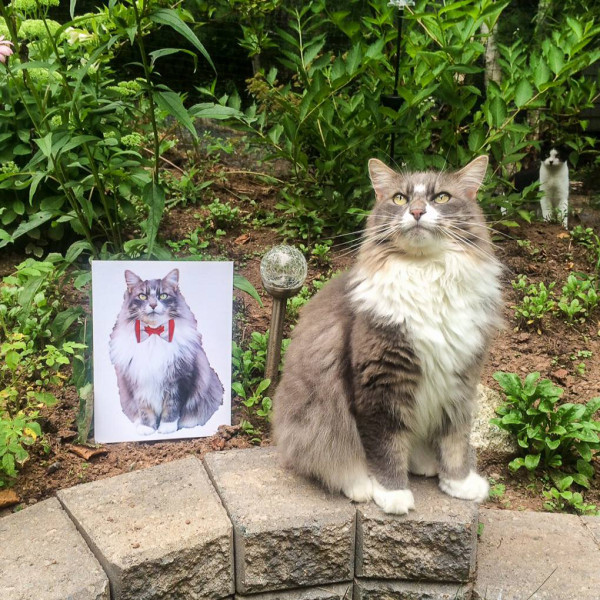 Already, Earl Grey’s campaign is getting attention on an international level. Chisholm says while their platform surrounds animal cruelty and rights on a national level, there are a few more tricks they’ve yet to reveal.

“We’re like all political parties, we don’t want to show all our cards too early in the election campaign, because the others might try to come at us with attack ads,” says Chisholm, the ghost of a laugh in his voice. “Earl Grey is pretty fierce when he’s attacked. He’s got a lot of claws and teeth, so they’d better be careful.”

Chisholm does say that a partnership with the Canadian Federation of Humane Societies is supporting plans of a coast-to-coast campaign for Earl Grey, with campaign posters and materials in every province in territory, promoting his message across the country.

“I think [Earl Grey] is the perfect candidate for Prime Minister, because he doesn’t owe anybody anything,” he says. “He’s not easily bribed, and cat nip is already legal so there’s not a whole lot he has to accomplish. He’s a blank slate that’s ready for serious change.”

In the unfortunate event that Earl Grey isn’t elected, Chisholm says all is not lost. There’s always south of the border.

“I know there’s going to be an American election, and we’ve got another cat named TJ who we think may have some American ancestry,” he says. “We’ve got more Facebook followers form the U.S. than we do from Canada, so they’re ripe for the picking down there. I think if we put TJ up against Donald Trump it’s no contest. He’ll beat the Donald paws down.”