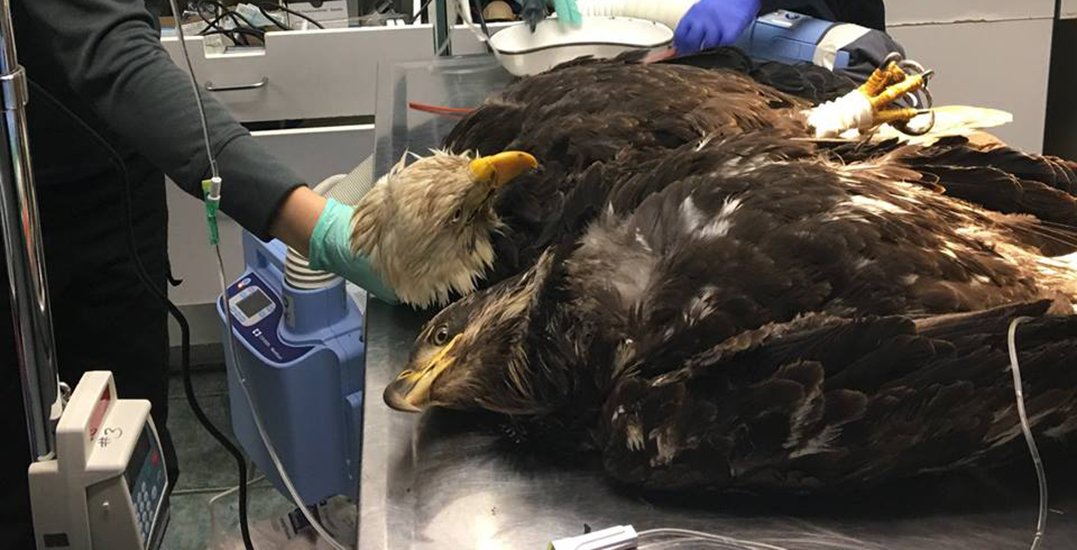 Twelve bald eagles have been found poisoned in the Cowichan Valley on Vancouver Island. Six of the birds have passed away while the remaining six remain in treatment.

The Raptor Rescue Society (RRS) first discovered a pair of eagles on Wednesday, January 16. The birds were suffering from some sort of poisoning but fortunately, are alive and still in the RRS’ care.

Over the next several days, ten more birds were found, six of which were already deceased. They were all found in the same area and it’s believed that their illnesses stemmed from the same cause.

The animals likely ate from a euthanized animal that was improperly disposed of. Euthanized animals are supposed to be incinerated or buried, but unfortunately, the eagles managed to find the carcass.

“There are situations where birds eat some type of medication and it can cause the same amount of damage that euthanization drug can cause,” explains Marina Versteeg of the OWL Rehab. “It can drug them and cause illness, dizziness, and other negative symptoms.”

Treatment for the birds includes being cleared of their crop contents and being given activated charcoal and intravenous fluids.

Fortunately, the six survivors are looking to make a strong recovery.

“The prognosis for them is good,” says staff at the Raptor Rescue Society. “Two of them are in our care at Duncan and four have been sent to a different hospital, north of the island.”

“We’re hoping that we don’t see any more. We suspect that whatever we saw is localized, so we don’t expect to see any more cases.”

Conservation Officers have also been investigating as to what caused for the birds to fall ill, however, they have yet to come to a conclusion.

These types of occurrences, unfortunately, happen more often than people might think. The OWL explains that these events happen even more during hunting season — birds will consume from hunted animals and can often experience similar symptoms as a result of lead poisoning.

Both the OWL and the Raptor Rescue Society explain that if anyone finds a bird (or any animal, for that matter), that seems drunk, wobbly, or even allows you to get very close to them, there’s a possibility that they may be experiencing some kind of poisoning.

Both organizations have an emergency line and there are several rehab centres on both the Lower Mainland and Vancouver Island.