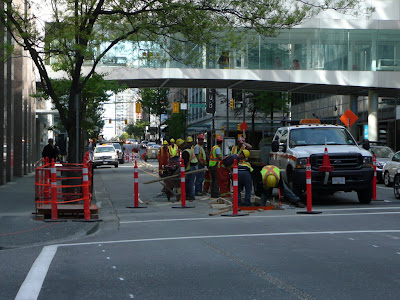 If you walk along Dunsmuir Street you’ll notice that construction crews are working at a feverish pace (is that even possible for city workers?) to complete Vancouver’s first dedicated two-way bike lane through downtown (an extension of the viaduct lanes). Furthermore, what’s even more surprising is that the construction started almost immediatley after it was unanimously passed by city councilors. This all part of the city’s two year $25 million plan.
One move I don’t agree with is having them work the Victoria day long weekend. Why the hell are we paying workers more for the same work they could have done later. Is this something that couldn’t wait an extra day!? Taxpayers should question that move. The total cost of this project is $810,000.
For the most part I’m in favour of this experiment. If anything, the Burrard Bridge and Dunsmuir Viaduct. I think Vancouver also needs to adopt the BIXI program, which, works wonders in Montreal and is now on its way to Toronto and a bunch of other cities around the globe.
The bike lane will have impact on transit, parking and taxi drop-offs. Although the city is in consultation with local businesses to minimize the impact. Over the next couple of weeks expect major delays during peak periods on Dunmuir.

All I can say is look to Copenhagen and other European cities. If you build they will come, but it will take some time for people to catch up with the infrastructure.

Now all we need is a mayor that is passionate about sports, then maybe we’ll get that corporate funded waterfront stadium and someone that understands the strong fan base of the UFC.