The Abbotsford Business Association funnelled a huge amount of money and effort into the neighbourhood; improving the façade of public buildings and cleaning up the streets. The community has since embraced the bakery on Montrose with open mouths.

Two older ladies walk through the door and know exactly what they want. They sit comfortably at a corner table in the quaint environment like its home, sipping coffee and enjoying fresh pastries.

“We come here once a week, because once we discovered it there was no going back…” says one of the women.

“Ya, if this place gets any more attention we will never make it through the door!” laughs the other.

And they are right, this is a tucked away sweet secret in Abbotsford, and the epitome of small town charm opposed to big city bustle.

“That is what all of our regulars are like,” says Tyler Duft as he waves to the women heading out the door.

“We have the best cross-section; college kids, young moms, business men, retirees; some folks walk in the front door, and before they open their mouths we have their drink on the table; it’s familiarity.” 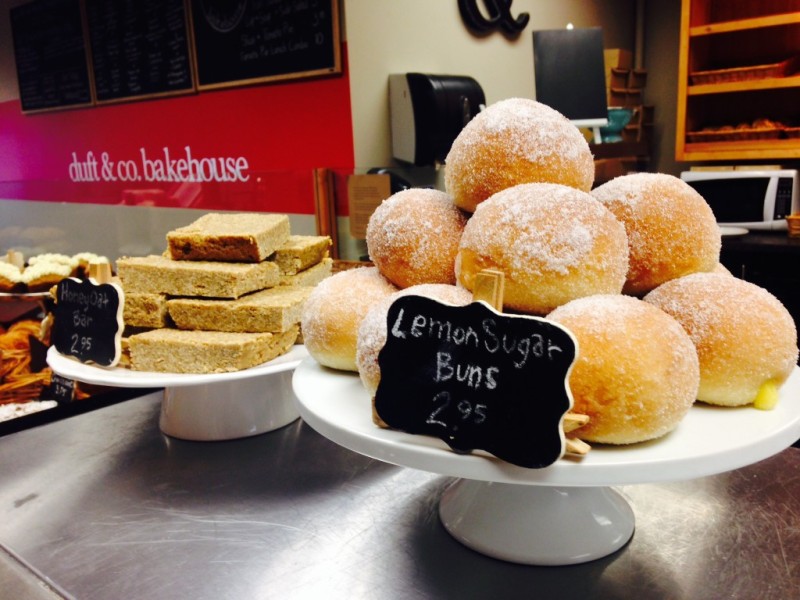 The lemon buns are the best I have ever had – there, I said it! I have travelled to Spain and Italy and tasted handmade, overpriced pastries glazed and glistening in the Mediterranean sun, but little did I know that hidden right here in Abbotsford, was the holy mecca of finger-licking flavour.

With a background in the culinary world, Tyler Duft and Cassandra Crocco met at CinCin’s in Vancouver. They fell in love and did us all a favour by opening the bakery.

“It was actually my dance moves that got her,” says Duft.

There is no need to ask them how it is working together because they’ve been doing it their entire careers and it’s always been good. They work until its done, and they’re both perfectionists and control freaks, with love being the main ingredient in all they do. The mix may seem lethal, but it’s the perfect combination for these two pastry fiends.

“I’ve been baking since I was a little girl, I was in elementary school when I won my first cake competition, that was my first big achieving moment in baking,” says Crocco.

I went on from there…I have always loved food and baking, and by travelling I took the time to figure out what I really wanted to do. Then someone mentioned pastry chef in passing and I said, ‘someone who just bakes desserts?’ I knew it’s what I wanted to do.”

“I basically started my career with a three-month stint at a kitchen in Vancouver, it was a rush, it was interesting,” says Duft on the beginning of his career in the culinary world. “I was a community care worker, working with mentally disabled children, and I basically gave back for 10 years and said its time to do something for me now.” 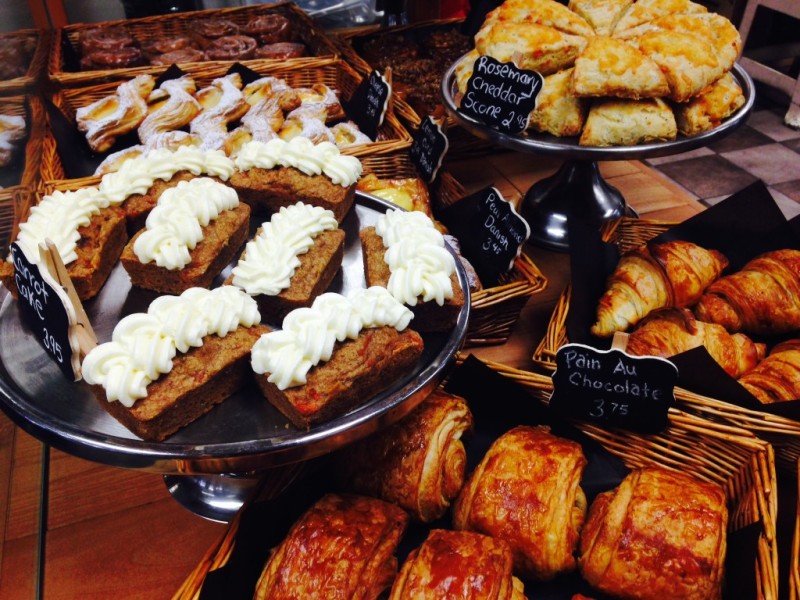 Crocco: We realized that there was nothing of this nature in Abbotsford…

Duft: …and this corner of the Lower Mainland needed some exposure to class and finesse.

Crocco: You couldn’t go anywhere and get a fresh croissant that was baked that morning…so we saw a need for it.

Duft: We also found that this community is so responsive to this type of thing; they enjoy good food and seeing what’s coming up next. We managed to open in the middle of a gluten free craze….

They offer gluten free products, coffee cakes, cookies and the occasional pastry or bar and loaves of bread that can be specially ordered.

“It’s a flax and sunflower seed loaf, that is unlike the brick made of nuts that you find at the grocery store,” says Duft. “It’s a full sized loaf of bread that toasts beautifully.”

When coming up with the name for their bakery, they both agree that things got a little bit out of hand.

Duft: At first we were being all cutesy, thinking along the lines of…Crumb…Crumble….then it got ridiculous: Vladimir Gluten, Croissant Shanty, Croccoduft…

Crocco: We probably came up with 500 ridiculous names…we were tired…and I said, ‘how about Duft & Co?’”

Duft: Then we decided the “Bakehouse,” because… this isn’t four walls and a roof, we wanted it to feel like coming home.”

If you were both a pastry what pastry would you be?

Crocco: I feel like, the first thing that came to my head was an original croissant, because I like simplicity. It’s amazing, delicious, there are a lot of layers to it and yet it’s simple.”

Duft: That’s so much better than mine… I’d say I’m probably a baguette, crusty on the outside but soft on the inside.”

Duft & Co. Bakehouse is celebrating its one year anniversary on Sunday, February 1, and want to thank the community for its support by giving back to a very touching case.

Greta is a five-year-old girl who lives in Abbotsford and is the daughter of the owners at HOFA – a small, local art store. She has been diagnosed with a rare form of bone cancer, and is currently undergoing treatment at Children’sHospital. Her parents are self employed but are unable to work so they can be with Greta and also care for their three other children.

On Saturday, January 31, 20 per cent of all proceeds will go towards Greta and her family. If you haven’t already stopped by Duft & Co., this would be the perfect time to treat yourself and help raise money for a family in need.

And trust me, try the lemon buns! 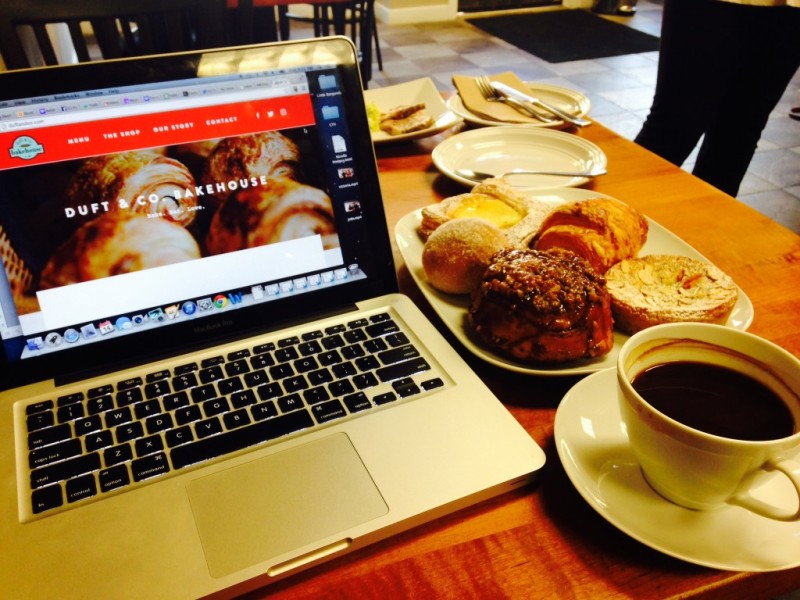 Some of the treats I sampled at Duft & Co.