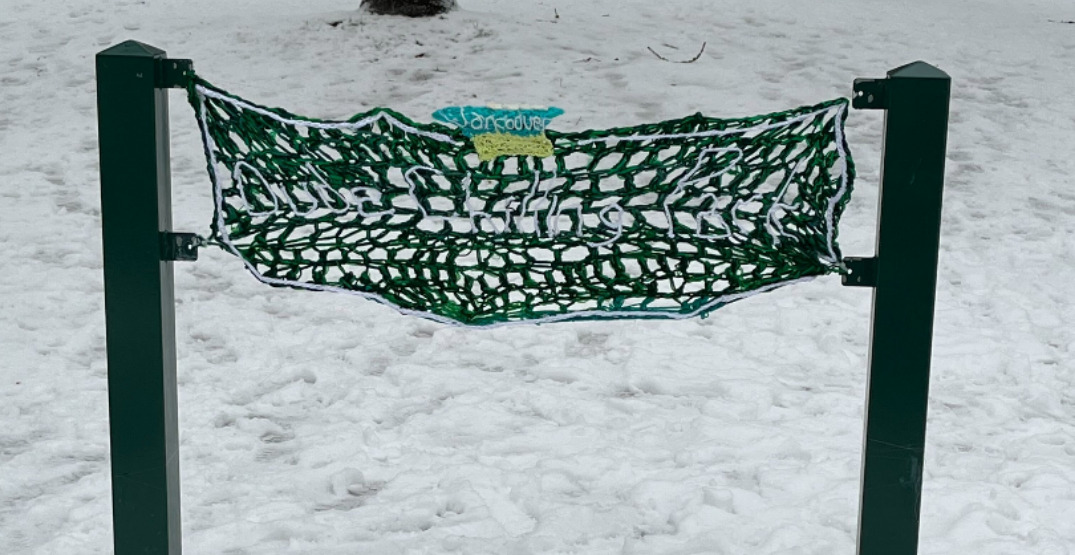 The saga of people stealing the Dude Chilling Park sign in Mount Pleasant continues, but this time it’s a little bit weirder.

What exactly are we talking about?

Someone stole the original sign, and now it has been replaced by a crocheted version.

According to a source on Twitter, the crocheted version of the sign was created by Deirdre Pinnock, a notable “yarn bomber” in the city. Pinnock took credit for the new sign on her Facebook page.

Pinnock did not steal the original sign, but replaced it as an act of goodwill.

A history of theft

The sign has been stolen multiple times over the past several years, with the most recent theft taking place in February last year. A week later, the sign was replaced.

The Vancouver Park Board suggested “vandals” had made off with the sign.

Okay everyone, you can chill now. A new Dude Chilling Park sign has been installed in Guelph Park after vandals took off with the previous sign last month. The sign has become a popular public art piece since an unauthorized sign was installed in 2012. pic.twitter.com/F5aYB87j48

— Vancouver Board of Parks and Recreation (@ParkBoard) March 4, 2021

The Vancouver Park Board told Daily Hive that crews are investigating the situation, and if the sign was indeed stolen it would be replaced.

In the meantime, maybe we could call it Dude Knitting Park?