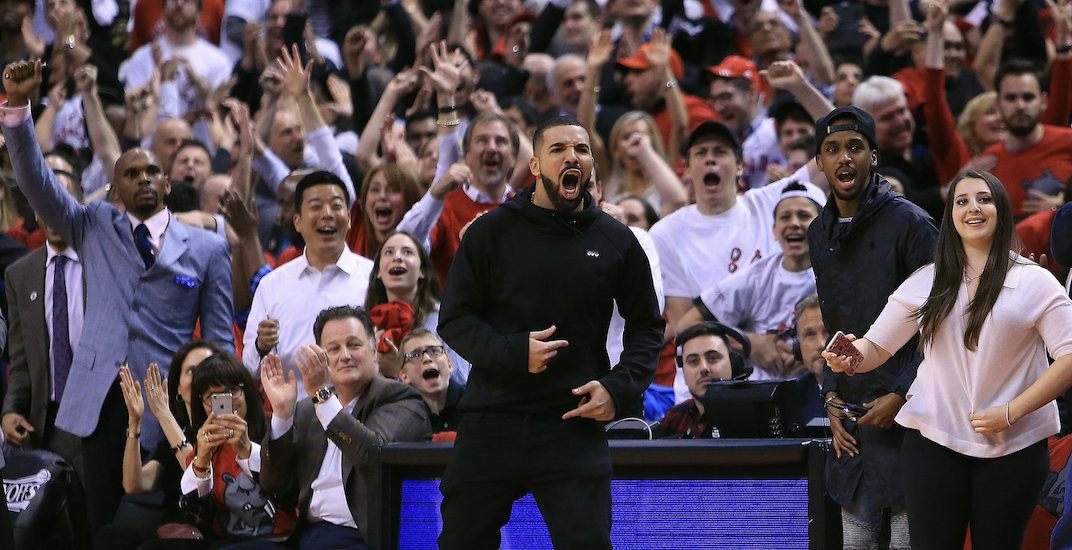 Drake believes. Do you?

The Raptors have played just three games this season – two blowout wins, and a hard-fought loss to the Spurs on Monday night.

Despite being early in the season, Toronto-native and diehard Raptors fan Drake, is feeling good about his team’s chances.

“Norman Powell looks great, DeMar DeRozan’s set to have the season of his life, Kyle Lowry’s looking streamlined,” Drake said confidently during an in-game interview on TSN over the weekend. “‘Tatted up Lu’ (Lucas Nogueira) has more face tats than any rapper that I know. It’s crazy.”

Then, Drake made a bold prediction.

“We’re going to the Eastern Conference Finals, boys. That’s all I got to say.”

And you know what? He’s not crazy.

The Raptors look like an improved team. While it’s still early, they have indeed showed glimpses of being a team capable of reaching the Conference Finals.

The Raptors came into training camp with an emphasis on ball movement—head coach Dwane Casey stressed the need to develop a team-oriented style of play this season, especially since president Masai Ujiri called for a culture change.

This season has been a different story, however.

In the small sample size of three games, the Raptors are 18th in the league at 22.0 assists per game—a small, but valuable jump from the previous year.

“It’s great to see them sharing the ball. The energy we have—just a change in the offence is exciting as well,” Drake said of the new-look offence.

Despite an assist number that still ranks them in the bottom half, the change is obvious.

Players are no longer standing around. Instead, they’re moving and making cuts to the basket as the ball moves from opposite sides. They play the seventh fastest pace in the league.

It’s even more effective when the lead guards, Kyle Lowry and DeMar DeRozan, have been aggressive in looking for their teammates, deferring to make the extra pass rather than take tough shots.

This play on Monday night against the Spurs signifies the Raptors’ progress offensively:

One of the biggest concerns coming into the season was the lack of veteran leadership and talent coming off the bench.

With Patrick Patterson, P.J. Tucker, Cory Joseph, and DeMarre Carroll leaving in the offseason, the Raptors coaching staff was given no choice but to rely on the younger players to step into those roles, even with the acquisition of C.J. Miles.

The Raptors’ second unit is fourth in the league in bench scoring at 46.3 points per game, with an incredible first place ranking in both offensive (63.0) and defensive (21.7) efficiency rate.

It’s impressive that a rookie, two second-year players, one third-year player, and a 13-year NBA veteran have led the best bench in the league so far.

Other notable bench rankings are:

The Raptors are among the best teams in the league defensively so far, and the statistics tell the story.

With a 92.7 defensive efficiency rating, that ranks the Raptors third in the league just behind the Clippers and the Spurs.

Defensively, the culture hasn’t changed—the Raptors’ coaching staff has preached communication, on-ball pressure and quick rotations, and it has shown.

The Raptors are currently ninth in the league in steals and blocks per game, eighth in preventing points off turnovers, and 11th in opposing teams’ points in the paint.

Aside from a strong team system, the Raptors can rely on various individuals to accept a difficult assignment, such as Norman Powell, Anunoby, Lowry, Miles, Pascal Siakam, and Serge Ibaka.

With an efficient offence, a strong defensive system and roster depth, the Raptors have the ingredients to be a team that can compete for an Eastern Conference championship.