The downtown Vancouver skyline is currently undergoing some major additions that will include the designation of the city’s second tallest tower.

In order to create more interest, variety and punctures in the rectangular green-glass panelled office buildings and high-rises of downtown, many new and architecturally innovative designs are part of the current wave of construction. 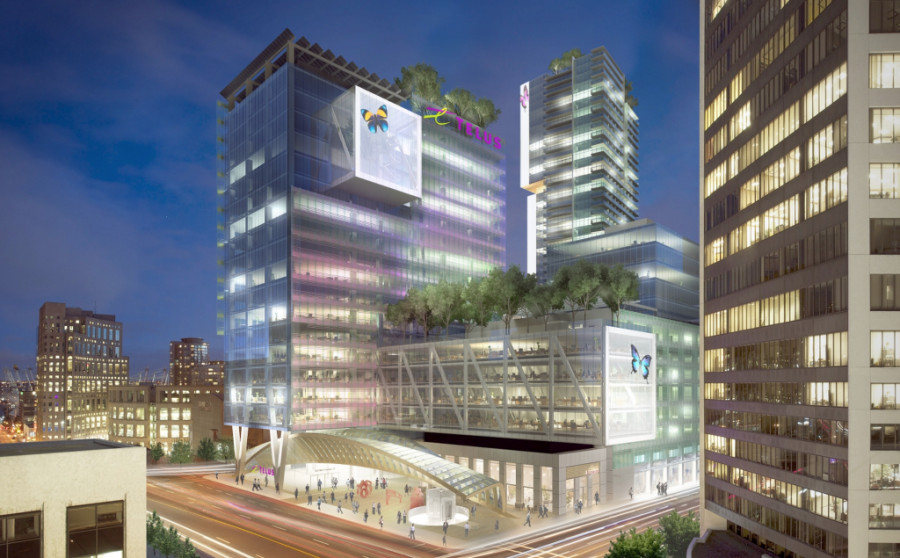 Location: 520 West Georgia Street
Budget: $750 million
Completion: Construction began in late 2011 and is expected to wrap up in 2015
Height: 22-storeys

The Telus Garden will comprise two towers and be built to a LEED Platinum standard. The first building fronts West Georgia Street and is a 22-storey office tower that will be home to Telus’ national corporate headquarters, major tenants such as Amazon and Bull Houser, and three new flagship restaurants by the Glowbal Collection. The second building will be a residential 44-storey condo tower comprising 500 suites.

Together, these towers will consume almost 30 per cent less energy due to its forward environmental thinking. It will feature 10,000 square feet of green roofs and two elevated roof forests. One of the most unique features of the Telus Garden will be its vibrant, pedestrianized laneways along the whole the length of the city block.

After undergoing several setbacks and cancellations, the project was cancelled in February 2009 and then suspended in August 2009 as the Ritz-Carlton Hotel had withdrawn from being the building’s operator. In June 2013, the 63-storey building project was rebooted to include the Trump brand. It will become the second tallest building in the city following the Shangri-La Hotel located just across the street.

The Trump Hotel portion will be located in the building’s first 15 floors while its remaining storeys are to be filled by 238 premium condos.

This 23-storey office building located on the south west corner of Thurlow and Alberni Streets will offer up to 365,000 rentable square feet. Its first three floors will be dedicated business space for retail, restaurant and amenities while its remaining 20 floors will be for office space. SNC Lavalin is moving its Vancouver offices to this building, occupying 100,000 square feet of space.

Taking a twist on the traditional office building space, the 745 Thurlow will feature a glass curtain wall that surrounds two sides of the building to meld together the appearance of two distinct building designs into one office space.

A striking glass shard 35-storey building will pierce the sky between the Marine Building and Guinness Towers on West Hastings Street. The MNP Tower will have a full view of the waterfront upon its anticipated completion this summer.

Meanwhile, the building’s basement level – the space used for Sears’ men’s clothing department – will be used as an Pacific Centre mall expansion of 12 additional retailers.

A trio of residential and commercial towers surrounding Rogers Arena is expected to welcome 614 rental suites of 1-, 2- and 3-bedroom apartments for professionals and families to move in downtown as well as amenities for attendees of Rogers Arena. The West Tower, expected to be completed by spring of next year, will provide much-needed washroom facilities as well as a sports bar and restaurant with arena-viewing capabilities. 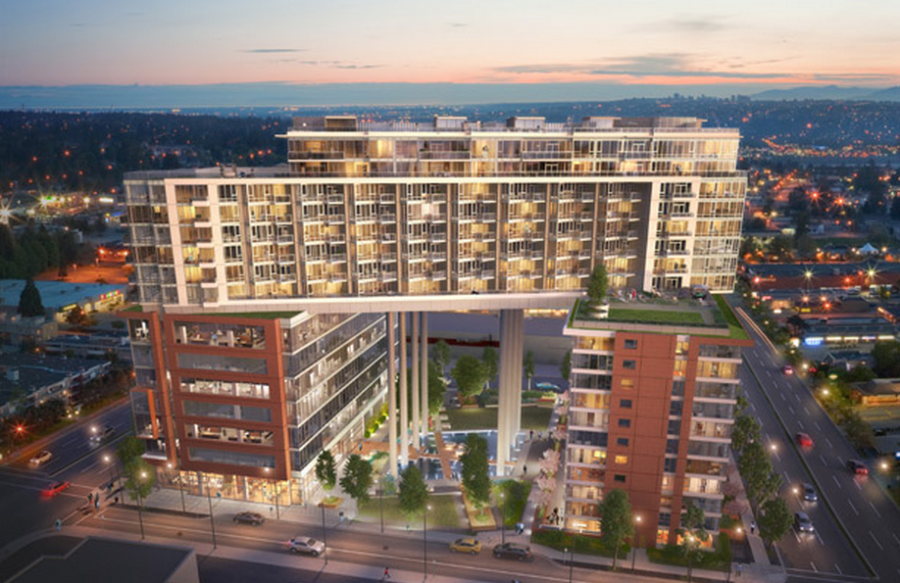 Completely different and innovative, this condo and office building design looks out onto the southeast side of False Creek adjacent to Science World and features an inspiring 8-storey ‘skybridge’  – a concept unique to Vancouver that is set aloft between two 11-storey towers. It is said to be ‘central’ to everything there is to access in Vancouver.

The development houses 304 condo units in its West Podium and skybridge while its East Podium facing Main Street consists of office space for the federal government.