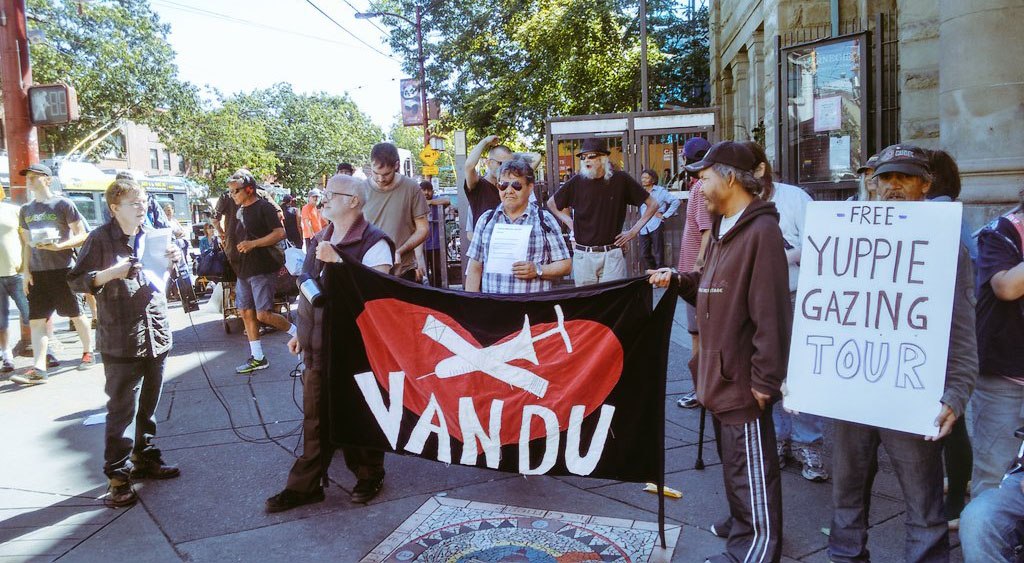 Residents of Vancouver’s Downtown Eastside have led a “Yuppie Gazing Tour” through the area in the latest protest over a tour showcasing local socially responsible companies.

The tour, which has now been discontinued because of the ensuing furore, cost $185, and was widely perceived to involve objectifying poverty-stricken residents for profit.

However, in interviews last week with Potter and others involved, Daily Hive clarified that the tour only visited businesses in the DTES. At each business, the owner would discuss their social enterprise business model with the guests, Potter said.

Before it was discontinued, only journalists had taken the tour, at cost. And Potter confirmed that if any member of the general public ever took the tour, half of the proceeds would go to a DTES cause, while half covered food and drink costs.

This week, public outrage over the tour has continued to grow, culminating on Tuesday in a “Yuppie Gazing Tour” protest by Downtown Eastside locals.

The protesters, led by the Vancouver Area Network of Drug Users, toured the neighbourhood, chanting, “Downtown Eastside is not a safari, drive away in your Ferrari.”

Karen Ward, a VANDU board member, told Daily Hive that whether Potter’s tour was appropriate depended on how it was framed. And, that it relied not only on the tour guide, but also on the visitors.

“There’s always a difference between intention and action. It’s about where you look, how you look and assumptions about people,” said Ward.

“No tourist operator can control the way in which people view what’s around them.”

Aside from the furore over Potter’s tour, Ward says, the issue of feeling watched was already brewing in the Downtown Eastside.

“This is something we experience on the street every day,” said Ward. “People feel like they’re being watched and in this weird way, fetishized as objects in the system.”

As well as poverty tourism, said Ward, the “Yuppie Gazing Tour” also aimed to protest gentrification of the Downtown Eastside.

As they marched through the streets, protesters stopped to look at businesses they deemed to have gentrified the area and excluded low-income people. Ward noted that it was a contradiction to see a store that had been run by three generations of one family, right next to a brand new boutique.

“[Gentrification] is driving people out of their homes, it’s changing the Downtown Eastside to make it like the other neighbourhoods of Vancouver,” said Ward.

Rising rents and changing zoning priorities as a result of gentrification are hindering the neighbourhood, not helping it, she said.

“We just want housing for people and decent social assistance rights for people,” she said.