A local company has developed an app that lets fans “pound” their favourite hockey players after a great play. The feature on the Shnarped App is inspired by the celebration where the goal scorer goes by his team’s bench and pounds each teammate’s fist. Fans watching at home or at the rink can click the pound feature, which will be sent directly to the player.

For fantasy hockey and hockey pool enthusiasts, Shnarped updates its player database in real time, allowing each user to track every player’s stats. The app’s advanced stat tracking system works across multiple leagues, making it essential for keeper leagues and fans who keep a close eye on prospects and rookies. Shnarped also allows you to see your favorite player’s most recent memorable play. Shnarped is free to download.

Vancouverite Dustin Sproat has been a key player in the development of Shnarped. Growing up in Alberta, hockey was a part of life for Dustin and his family. After excelling as a youngster, Sproat went on to play collegiate hockey at Princeton University. As players moved on to graduation, or to the pros, Sproat realized it would be very difficult to maintain contact with many of the guys he referred to not only as teammates, but as friends. Enter the Shnarped hockey app.

Sproat recently completed his MBA right here in Vancouver at UBC, and dedicates his time to building this app into the number one destination for any hockey fan to track their favorite teams and players. Shnarped has allowed him to keep tabs on his former teammates who are now playing hockey in Europe, the AHL and the big show (NHL). With over 300 professional players from around the world using the app, along with 80 current NHL players, including Rookie of the Year candidate and former Vancouver Giant Brendan Gallagher, as well as Blackhawks Captain and Team Canada superstar Jonathan Toews, Shnarped allows for fans and players to interact with another at an unprecedented level.

Want more incentive to give this revolutionary hockey app a try? Download and register for Shnarped, and you will be eligible to win a FREE autographed Roberto Luongo jersey! 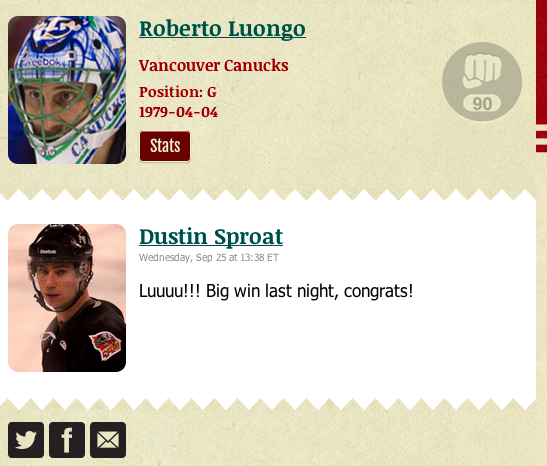 **Note – Luongo is not active on Shnarped as of yet, but this will reach out to his Twitter account.

Sproat will be able to track which users have sent this out and will contact the winner on October 23!

Here are some examples of current NHL players interacting with fans using Shnarped.

Keep an eye out for Sproat and the Shnarped team on your TV as they may appear on CBC’s hit entrepreneurial show Dragon’s Den this October!

***Note to Androiders and Non-Tweeters:  If you don’t have Twitter, you can send Luongo a “pound” without enabling the tweet button and you’ll still be entered into the contest. If you are an Android user, sign up here to get notified when Shnarped comes to Android in mid-October so you can participate too!