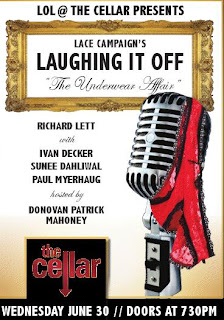 Donovan Mahoney, one of the funniest men in the city is putting together another gig, this time to benefit all cancers “below the belt”. The show goes down tomorrow night at The Cellar. So go out, have a few laughs at this fundraiser. Thus far Donovanpee’s LOL @ The Cellar has raised $2500 for Charity this year (Habitat for Humanity and Free The Children).
About LACE Campaign and the Underwear Affair
Team LACE Up! was formed by a group of girls involved with an amazing new campaign to prevent cervical cancer called the LACE Campaign (through B.C. Cancer Agency).
LACE stands for Live Aware, Create Empowerment and it’s about saving lives by getting Pap tests. We know Pap tests aren’t fun or glamorous, but 50 women die in B.C. every year and over 100 are afflicted with cervical cancer because they don’t get one. The LACE Campaign is about awareness, not fundraising, but we’ve decided to take part in the annual Underwear Affair 10 km run to raise money for all cancers “below the belt”. Race with us for LACE!
About the Fundraiser
LOL’s weekly comedy night is supporting charity again! On June 30th Cancer Survivor and super comedian Richard Lett will head up a group of great stand-up comics. 50% of proceeds will be donated to the LACE campaign’s underwear affair 10k run team (Team LACE Up! gals Lizzy Karp and Jenny Duncan). Help Laugh It Off kick off the July long weekend…you know the jokes are going to be good when we’re raising money for the underwear affair!
Tickets are $10 and can be bought through LOL producer, promoter and comedian Donovan Mahoney at [email protected] make sure to follow him on twitter @donovanpee for all the latest updates! To find out more about LACE Campaign go to the website www.lacecampaign.com or email [email protected]
VancityBuzz.com