An angel walks among us in Vancouver, and she’s cleaning up your dog’s crap.

Out on her daily walks with her two dogs, Dodger and O.D. (Other Dog), Eileen Mosca noticed a disgusting problem: irresponsible dog owners not picking up after their four-legged friends.

“It drives me insane,” she said.

In her neighbourhood of Grandview Woodland, Eileen started seeing it more and more – on boulevards, on lawns, even in school yard parks where children were playing.

So she took action.

Already carrying plastic bags to clean up the poop of her own pups, Eileen started picking up the dog waste that bad dog owners left behind.

“The reason I started it is because I wanted people to think that it was socially acceptable to pick up that other poo,” she said.

“It’s not hard to do. You already have a pocket of plastic bags.”

But her small gesture has grown into a neighbourhood movement (pardon the pun).

She put up a poster at Lord Nelson Elementary and people started posting it in their own parks. 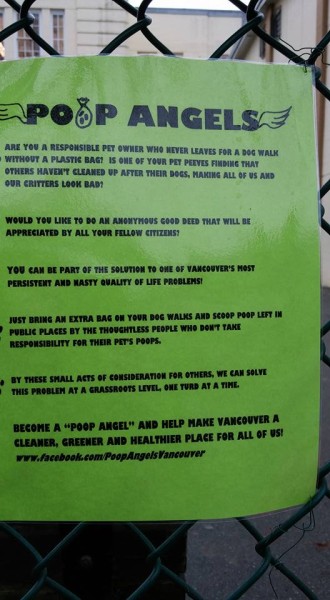 “I understand that parents are disgusted and outraged with people leaving dog feces in the park,” she said.

“We may as well pick it up ourselves – because these people won’t.”

A lifelong bike rider and canine lover, Eileen feels that, like cyclists who don’t obey the rules of the road, irresponsible owners can make all dog owners look bad.

“If i didn’t have a dog and didn’t like them and I stepped in dog poo I would hate them even more,” she laughs.

Her hope is that people who see the posters will think about becoming a poop angel for the sake of living in a cleaner, greener Vancouver. Or as she says, solve the problem at a grassroots level, one turd at a time.

“It’s so simple but it can make a big difference,” she said. 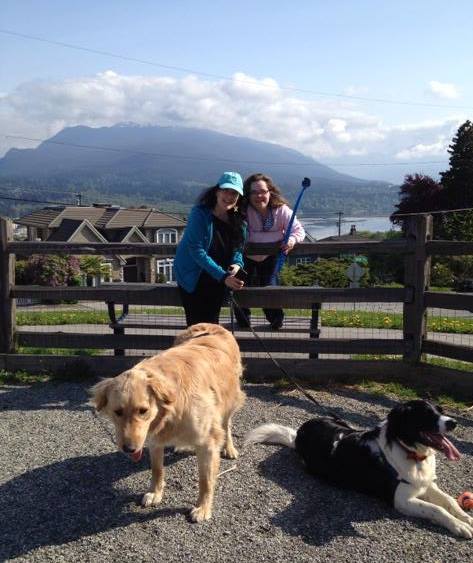 Eileen with her niece and two dogs, a big mutt named Dodger and a Stabbyhoun named O.D. (submitted). 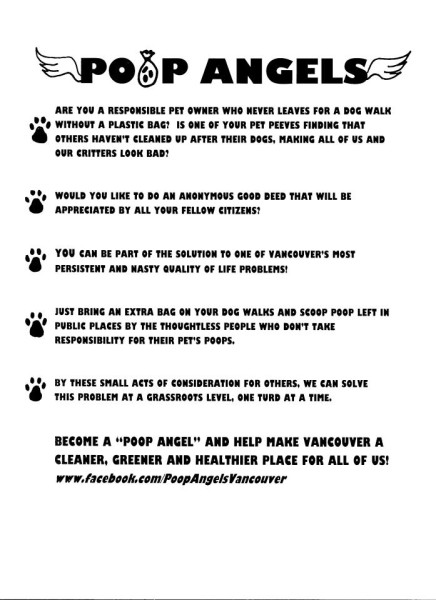