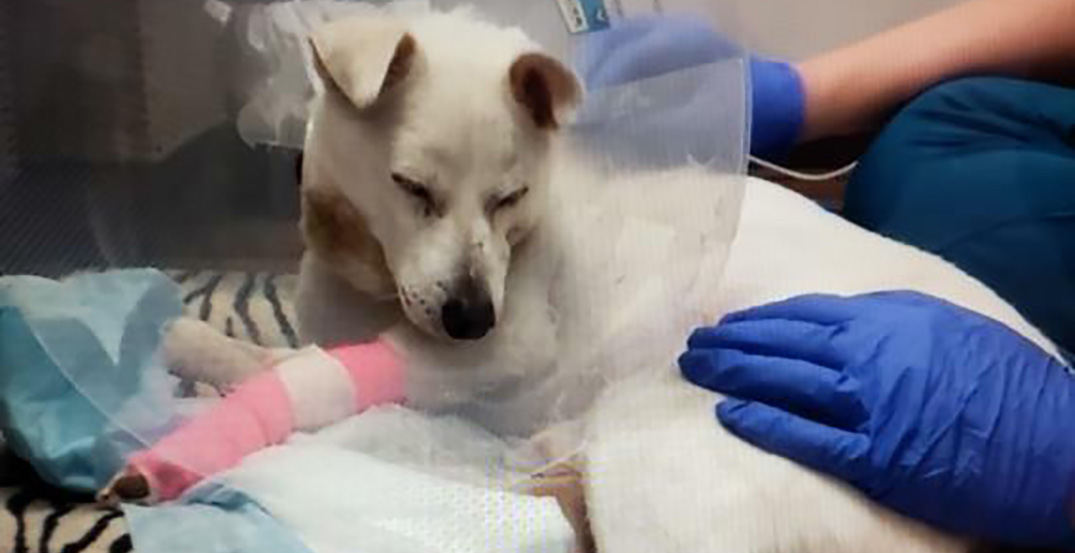 After watching his dog become the victim of an attack by two others, Piolo Cordovez says the people responsible for the animal refused to give them any contact information and left the scene.

Now, his small mix breed, Psalm, is still being treated for injuries to his jaw, lacerations to the abdomen, and bruised legs.

According to Cordovez, he was walking the animal on Tuesday through Adanac Park, where the pair are regulars.

“We were actually about to go home but stopped for a few seconds to say hi to some of his friends and the owners,” he told Daily Hive in an interview. “All of a sudden, two pit bulls or boxer-type breeds rushed Psalm, mauling him in the process.”

Cordovez says the people responsible for the dogs yelled for them to get back but didn’t make any efforts to pull the animals off.

He, however, was trying to stop the animals from reaching his dog’s neck. He reports sustaining some minor cuts and a sprained finger. The scene got bloody until Psalm slipped out of his harness and took off running. Cordovez followed him as best he could.

“The amazing thing was, when Psalm took off, he went back to our house,” he said, adding that “when no one answered,” he took off again. This time being picked up outside of a local grocer.

Here a Good Samaritan picked him up and took him to a vet. After hearing the dog had been found, Cordovez rushed the wounded hound to an emergency facility.

Psalm required a blood transfusion, antibiotics, pain relievers, and IV drips. He’s recovering well, but it’s estimated to take up to two weeks, and the costs are mounting.

A fundraiser has been set up to help cover some of the small dog’s medical costs. At time of writing, over $1,600 has been raised on Facebook, though Cordovez says the total is closer to $2,200 with people e-transferring him some monetary help directly.

Bystanders on the scene took video and photos of the people minding the alleged aggressors. They claimed not to be the owners, and are shown leaving when people filming say they are calling the police.

Cordovez said he and others are making efforts to identify them, and he has filed a report about the incident.

Overall though, he wants dog owners to be more responsible when it comes to owning large, potentially aggressive animals.

“I think owners of percieved aggressive type dogs know the risks and responsibilities of owning such pets,” Cordoves said. Adding that they should always practice safety measures when taking the animals out in public.

“Without proper training, to the owner and the aggressive breeds, incidents like this could happen again.

“We really got lucky that Psalm didn’t really suffer any serious injuries.”