Newsies is only here until Sunday, a limited week-long engagement in select cities across Western Canada. That might be seen as smart marketing on behalf of Broadway Across Canada, as mega-hits like Book of Mormon and Hamilton (when are we going to see that one on the West Coast?) rake in both ticket sales and unparalleled frenzy.

But don’t brush off Newsies as yesterday’s news just yet, as this polished production recalls a simpler time of wholesome Disney fun and uncomplicated characters, as well as some breakneck choreography and major showtunes. 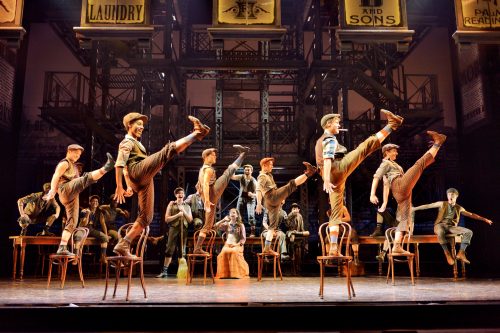 Whether you were a fan of the 1992 ‘cult’ Disney movie or not (I never saw it), Newsies tells the time-honoured story of a rollicking band of lightly-accented New York orphans, selling papers under the heel of one of the most powerful newspapers of the era. This isn’t your modern-day paper route, as the headlines mostly dictate how many papers the underaged boys will sell each day- and therefore how much pocket change constitutes their daily take-home pay. When publishing titan Joseph Pulitzer (Steve Blanchard) raises distribution prices at the newsboys’ expense, centre character Jack Kelly (Joey Barreiro) starts angling for a newsies strike across the city. 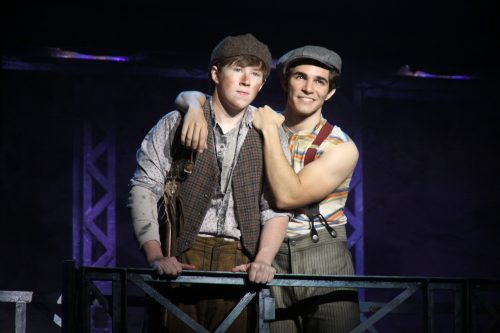 There are the usual time-honoured stereotypes, including the reluctant hero who paints professional-looking backdrops for fun, his cheerful best pal with the bum leg, a tiny and precocious ten-year-old, and the guy who looks and acts exactly like Silicon Valley’s Jared (gawky, bookish, and feeding the language of unionization to the newsies’ charismatic leader). Make no mistake that the boys dominate this musical, with the best lines and jaw-dropping backflips, dropping massive group numbers off the well-designed stage at a frenzied pace.

Newsies is a solid production, but it’s hardly perfect. Both of the leads needed to articulate their spoken lines more clearly, and budding journalist Katherine (Morgan Keene) had an odd way of emphasizing her lyrics that proved more distracting than convincing. Furthermore, the adult Goliaths of the publishing world simply didn’t feel menacing enough, and certainly couldn’t measure up to the long tradition of Disney villains preceding them.

Despite some minor quibbles, Newsies remains a strong title in Broadway’s back catalogue, harkening back to an era when boys could dance out their feelings, unironically.