When thinking about films that genuinely terrified me as a kid, few come to mind.

For some people that film is Jaws, others The Exorcist, but for us that were born in the late 80s/early 90s, that film was probably Jurassic Park.

Now, after nearly 13 years since the third film, Universal Pictures will be bringing dinosaurs back to life as Jurassic World. The film is set 22 years after the events of the original Jurassic Park on Isla Nublar, the island attraction where all hell broke loose because they didn’t know how to build a proper fence (with wires, really?).

In the upcoming film, Isla Nublar has been rebuilt into a fully functioning dinosaur theme park that attracts thousands of visitors every day – as originally envisioned by John Hammond.

However, as always, something goes terribly awry [again], setting off a chain of events that could also signal the start of a new trilogy to the science fiction adventure film franchise.

Don’t expect Sam Neil, Jeff Goldblum, Laura Dern or Richard Attenborough to reprise their characters as the Jurassic World cast will be fresh faces, including Chris Pratt (Parks and Recreation, The Lego Movie, Guardians of the Galaxy), Bryce Dallas Howard (50/50, Spider-Man 3), and Ty Simpkins (Iron Man 3). BD Wong will reprise his role as Dr. Henry Wu from the 1993 film.

Filming for Jurassic World kicked off several weeks ago in Hawaii and will continue on to Louisiana and San Diego in the coming months. The film’s director Colin Trevorrow recently released plot details about the latest instalment into the franchise during an interview with Slash Film (*SPOILER ALERT*):

“Jurassic World takes place in a fully functional park on Isla Nublar. It sees more than 20,000 visitors every day. You arrive by ferry from Costa Rica. It has elements of a biological preserve, a safari, a zoo, and a theme park. There is a luxury resort with hotels, restaurants, nightlife and a golf course. And there are dinosaurs. Real ones. You can get closer to them than you ever imagined possible. It’s the realization of John Hammond’s dream, and I think you’ll want to go there.”

“Our relationship with technology has become so woven into our daily lives, we’ve become numb to the scientific miracles around us. We take so much for granted.

Those two ideas felt like they could work together. What if, despite previous disasters, they built a new biological preserve where you could see dinosaurs walk the earth…and what if people were already kind of over it? We imagined a teenager texting his girlfriend with his back to a T-Rex behind protective glass.”

“There will be one new dinosaur created by the park’s geneticists. The gaps in her sequence were filled with DNA from other species, much like the genome in the first film was completed with frog DNA. This creation exists to fulfill a corporate mandate—they want something bigger, louder, with more teeth. And that’s what they get.”

After the horror show that was 2001 film Jurassic Park 3, this premise seems like an interesting and modern way to bring the franchise back into the main stream. Jurassic World hits theatres on June 12, 2015.

What do you guys think about the new plot for Jurassic World? Comment below! 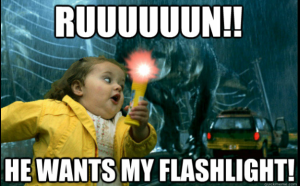