Jory Kinjo has been doing this since he was 18. He’s played with the likes of BB King, Buddy Guy, ZZ Top, and many more. Jory is also one of the few Asian faces on the Western Canada music circuit. I sat down with him at Desert Live in Osoyoos and asked him more about his music and representin’.

Tell me about yourself! How did you get to where you are now?

I went to the University of Calgary and was in the jazz program there. I joined an R&B and funk band called Mocking Shadows. We released five albums and we toured quite a bit. We did a few tours with BB King, Buddy Guy, ZZ Top, Tragically Hip. In 2007, I was asked to play bass with this ska band called JK & The Relays. We went over with Europe for a tour and played with Bad Religion. When I got asked to do that tour, that’s when I really started to check out ska and reggae.

All of the music I play now is a mixture of my experiences. I’m not exactly sure where I am right now, but I know I can embody what I call “soul music,” be it reggae or R&B. It’s coming from the soul. 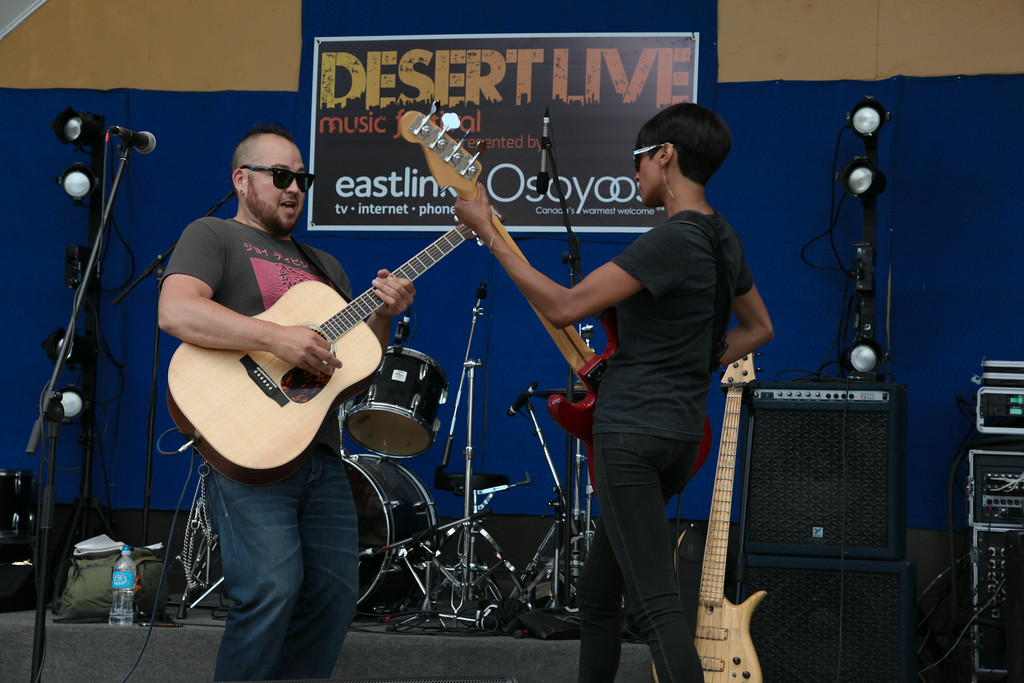 So, where are you ‘really’ from?

I grew up in Calgary, born and raised there. I travel as much as I can, but Calgary’s a good place to live. My family is there and it’s the main reason why I live there. It’s important to me to get out of Calgary as much as I can, just to spread the word. That’s so great for me to come to BC, it’s so close and there’s so many opportunities for me to play. In Alberta it’s not quite as varied, I find generally BC has much more to offer in the way of opportunities.

If you were to describe your experience in 3 words…

Seasoned. Because I just play as hard as I can. I haven’t really stopped since I was 18 – I’m 34 now. Seasoned, inspired and thankful. I think the other two are self-explanatory.

If one day you woke up and you couldn’t do this anymore, what do you see yourself doing instead?

When I was younger, I had a lot of things going on. I was really competitive in judo and martial arts in general. I haven’t thought of a life outside of music, so that’s almost scary. I like kids a lot, so I would like to work with kids… maybe teaching them. I don’t know. Something with kids.

What’s the area that you’d most like to improve?

Today was a big test for me because I had never played a festival all by myself. It’s always been in a group setting with other musicians backing me up. it’s a really different feel, you almost feel like you’re naked up there. Just having the same confidence in my solo show as I do with my bands. I just have to let go of all the fear, and inevitably it all comes out great. Or, it comes out. What’s done is done. [laughs] 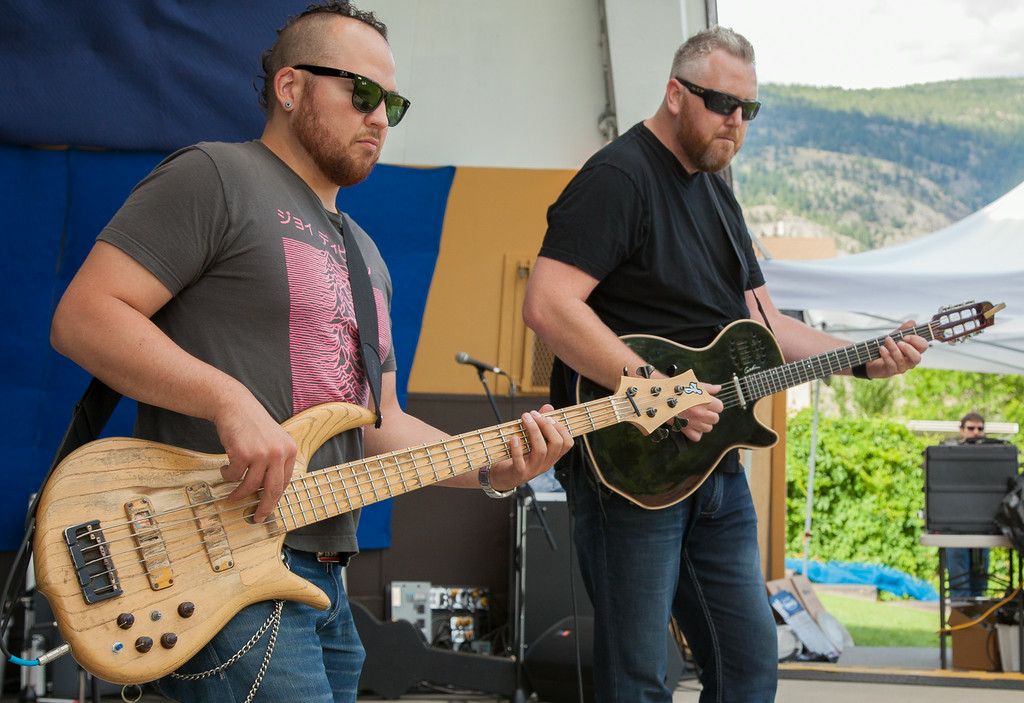 The bass guitar feels like an extension of my body. I’m really comfortable on the bass, I’ve spent thousands of hours. That’s what I know that I really own.

How do you feel being one of the few Asian musicians at this festival?

Particularly being in BC with a large Asian population, I think it’s just representative of the times. We’re not defined racially by music anymore – I don’t think so. I think that all the gates are open and everyone is welcome to all forms of music. I’m proud that I play what some people would consider “black music.” I just play it by the soul.

Any examples of backlash?

Sometimes. I like to play ‘black’ music and it’s almost racist to say that. It’s sometimes hard because people will judge you by your race before they ever hear your music. For me to overcome that stereotype alone, has been challenging at times. Sometimes people hear recordings and they expect me to be black. And when they find out I’m not, they think I’m not as ‘legit.’ I like to break down those barriers.

BB King said to me: “There’s black chocolate and there’s white chocolate. But it’s all chocolate.”

You’ve performed a lot in Japan throughout the years. What’s that like?

It’s really interesting. It’s totally different. Most of the venues I play in, they’re not drinking alcohol – they’re sitting and watching me. You really have to work to get people to dance in Japan. The role of the audience is to sit and listen, and until I really encourage people to get out of their seats and to lose their inhibitions – that’s when the party got going. People really take to my music when they can be a part of my show and let themselves go.

I have family in Okinawa, so I try to go back every year or so. I’ve played in some really big festivals over there have had some great opportunities on TV and radio. Sometimes musicians can’t speak to one another verbally, when we play internationally. I’ve communicated to other musicians through music more than I have verbally. It’s a good reminder of the power of music and how it’s a very primal form of communication. 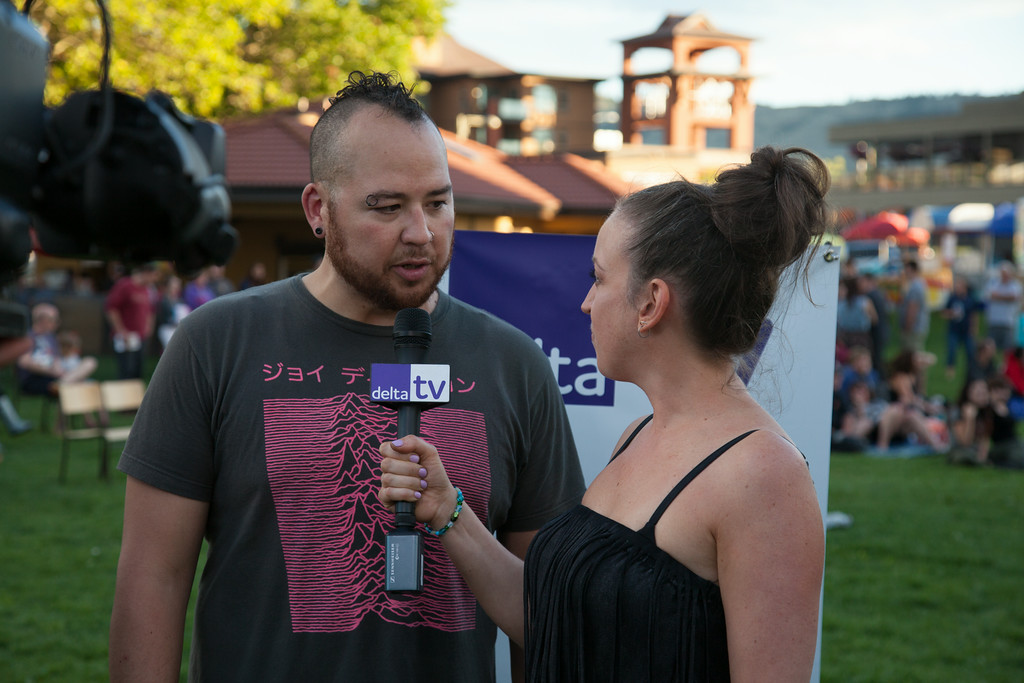 I’ve always loved Michael Jackson, James Brown, Bob Marley. But as for role models: my father, coming from Japan, was not being afforded the opportunities growing up. He wasn’t allowed to play guitar – my grandfather forbade it. That was why he encouraged us to play music. Simply having permission to play music is something a lot of people take for granted.

We’re lucky. Lucky to have that.

Favourite Local Winery
Hester Creek. I played a show there and was just really taken with it. Everyone’s so hospitable and it’s so beautiful.

Favourite Restaurant
I played at the Dream Cafe in Penticton last night. The food was wonderful and I thought the venue was world class. Everyone in Penticton and the surrounding areas is really lucky to have it.

Favourite Outdoor Activity
I like to play hockey. I have three brothers and a sister. My dad would flood the backyard and we’d all go out and play.

You mentioned siblings? What do they do?
It’s right across the board. My youngest brother is also a musician, Kaley Kinjo – he’s more folk, singer-songwriter. My oldest brother is a psychiatrist. My other brother is an industrial designer, and my sister is a geologist.

But we all play music and we like to jam.

Favourite Gig Ever
With BB King at the Montreal Jazz Festival. It was his 78th birthday, and Bono called him on-stage and wished him a happy birthday.

Jory Kinjo has a big show coming up with Ziggy Marley in Calgary. He’s also planning on releasing an EP the fall. Keep up with the latest on Jory’s website.

Jory Kinjo was at Osoyoos as part of the Desert Live Music Festival.

For more information about Desert Live and Osoyoos’ Canada Day festivities, visit desertlive.ca. You can also check out both Destination Osoyoos and Thompson Okanagan Tourism for more travel information.

Special thanks to Destination BC for their support in sending Vancity Buzz to Desert Live!