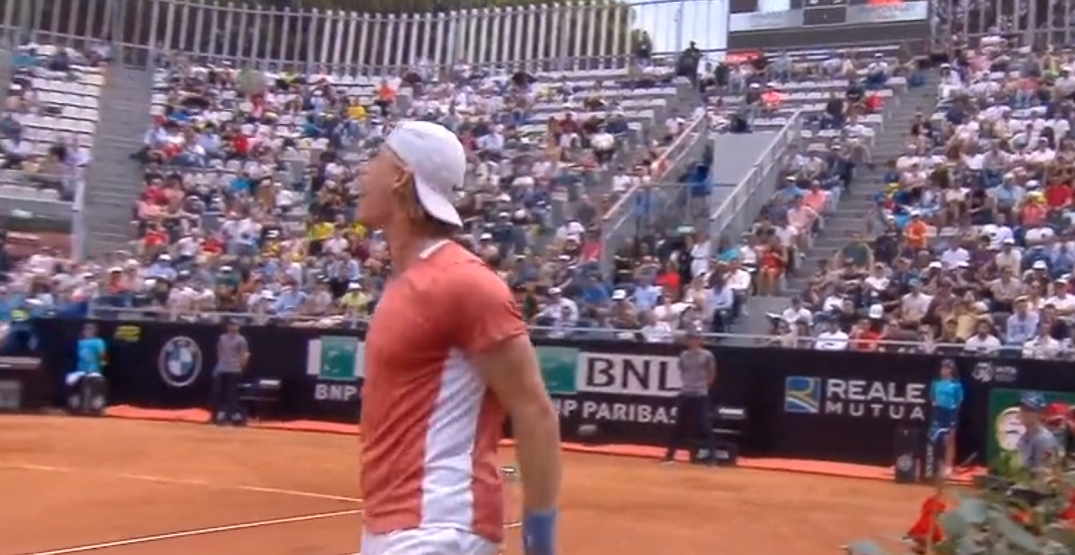 Denis Shapovalov hasn’t been making too many friends this week.

During an ATP event in Rome, the Canadian tennis star was facing off against Italy’s Lorenzo Sonego before confronting the umpire about a ball marking.

Boos and jeers rang out on the court as a point penalty was awarded in favour of Sonego, clearly striking a nerve with Shapovalov. Shapovalov was docked a point for crossing over the net to argue a ball marking call, starting the crowd’s reaction.

“Shut the fuck up,” Shapovalov exclaimed back at the Italian Open crowd.

Eurosport caught the exchange on their cameras:

Another video captured by a fan in attendance showed a different angle of the exchange, where it’s clear the locals weren’t too kind to the 23-year-old Canadian.

Shapovalov vs the Italian crowd in Rome😂 pic.twitter.com/W9H7V694PA

Shapovalov later apologized to the umpire and explained the incident afterwards.

“Yeah, like I said, it was the heat of the moment, so I got emotional,” Shapovalov added. “I apologized after. Obviously, it was my mistake. There’s nothing they can do.”

Shapovalov returns to the court today against Georgia’s Nikoloz Basilashvili in the second round.

“He was just telling me to get off the court, get out of there, waving me off the court. Trying to obviously get under my skin or whatnot,” Shapovalov told reporters at the post-match press conference about a specific heckler. “The reason why [the heckler] didn’t get kicked out was because [the umpire] told me he didn’t see what happened. That’s very understandable. I feel like he kept an eye on him after that. It didn’t bother me after that.”

The Canadian is looking to build on a strong start to the season, including a quarterfinal berth earlier this season at the Australian Open.