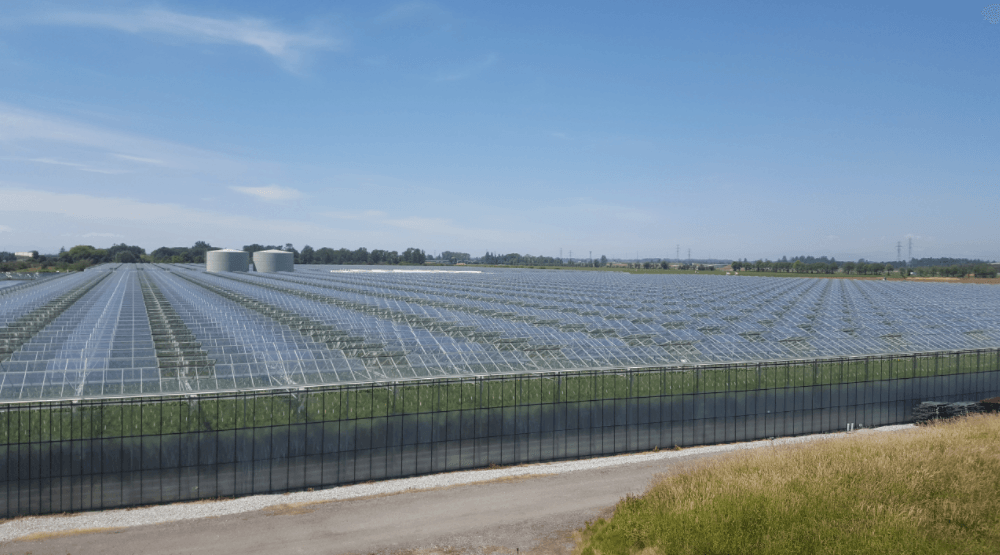 This greenhouse in Delta currently grows tomatoes, but will become a large-scale medicinal marijuana growing facility in the near future. (Eric Zimmer / Daily Hive)

A joint venture between a BC-based greenhouse food grower and a licensed medical cannabis producer – also based in BC – will result in a massive facility where medically licensed marijuana will be grown on a large scale in the near future.

Under the terms of the venture, Village Farms is contributing one of its already-existing 1.1 million-sq.ft, Delta-located greenhouses, and in exchange, Victoria-based Emerald Health Therapeutics will provide $20 million cash to retrofit the facility. Each party has a 50% ownership in the venture.

With a collection of greenhouses that span 110 acres in total, the Village Farms facility has been growing tomatoes in its industrial facilities on the edge of Burns Bog since 1995/96.

However, when the current growing season wraps up, (which typically happens in November or December), work will begin on converting one of the greenhouses, a 25-acre facility known as Delta 3 – into a large-scale cannabis-only production and growing facility. 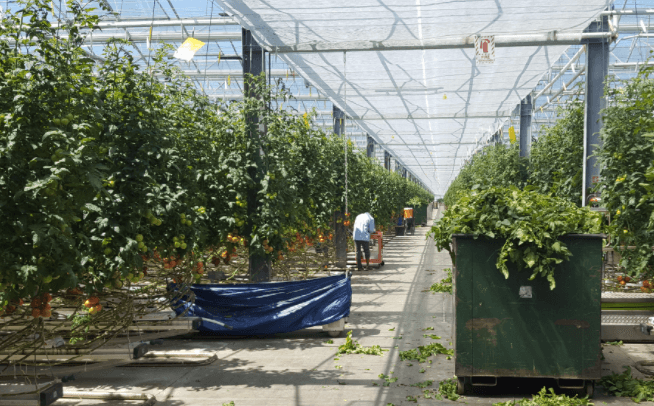 And that’s where Emerald Health comes into play.

“At the moment, there’s still no cannabis present [in the greenhouses] but the company is in the midst of putting in an application to Health Canada,” said Maheep Dhillon, Vice President of Corporate Development at Emerald Health Botanicals.

The idea of the joint venture is to position both companies for what both parties say is the inevitable product demand that will soon be a reality.

During a tour of the facility, Dhillon told Daily Hive the estimated market demand for cannabis in Canada  “– as soon as the recreational market kicks in – will require about 600,000 kilograms per year.”

For Village Farms, “diversification into cannabis production is a transformational opportunity to apply our core capabilities and expertise…to a product that is vastly more profitable, ” said Michael DeGiglio, CEO of Village Farms International, Inc.

The joint venture between Village Farms and Emerald Health was finalized early last month in a deal Dhillon called “the perfect marriage.”

With 50 cannabis producers currently licensed by Health Canada, getting a license is a very “stringent” process, he explained.

But with Emerald Health the eighth producer to be licensed back in 2014, “we know the regulatory regime and we know how Health Canada wants all the procedures to take place,” Dhillon said. “Then we’re getting into bed with a company that knows how to do agriculture on a huge scale.”

Up until about a year ago, he added, “everyone wanted to grow cannabis indoors.”

A  few companies, he said,  “have now tried to grow it in greenhouses and the market is starting to accept the fact that greenhouse growing is acceptable; it’s going to do well and you’ll be able to produce it at a very low cost.”

While the crop may be changing, operations and procedures at Village Farms will remain the same, both from a grower and business perspective.

“The farming that we do is very regulated,” said Village Farms’ John Bos.

This, he said, is “a provincially audited stewardship and environmental standards audit that we have at all our sites, which governs things like water usage, standard operating procedures and food safety.”

Any outside issues arising from the changeover are expected to be minimal, as well.

Still, things like odour control and the prohibition of pesticide use are always considered. And other factors like humidity control in the greenhouse itself are important because “cannabis is somewhat more of a delicate plant to grow,” Dhillon said.

As for cannabis cultivation and tomato cultivation taking place on the same company property but in a different house, Bos said there will be no “cross-pollination” of employees.

“The operation will be designated as its own entity,” he said.

And for Bin Huang, PhD, CEO of Emerald Health Therapeutics, it’s an entity her company believes in.

“I feel that we’re in good hands,” she said. “They [Village Farms] are modern and they have expert systems.”