Death In A Dumpster is a musical that was collaboratively written by a group of individuals from the Access to Music Foundation, Directions Youth Services and professional mentors. Everything from the song lyrics to the script were produced and written by at risk youth and were performed by them as well.

This musical was bolstered by real facts and figures throughout the production that brought to light real problems from the systems meant to help the individuals living in Vancouver’s Downtown Eastside. Many of the stories shared in the piece were based on the performers real lives and spoke their truths.

First, we meet our lead character Danny and follow him on his journey from the Maritimes to find his long-lost mother. Danny finds himself broke on the streets of Vancouver and meets a host of colourful characters, including Daisy, a functioning schizophrenic with an abject hatred for the system, Jack, the irascible drunk and Josie, the transgender sex worker.

Below, we had a chance to speak with Neil Weisensel, orchestral arranger and composer in residence, to talk about how he got involved with the project and its cultural importance. 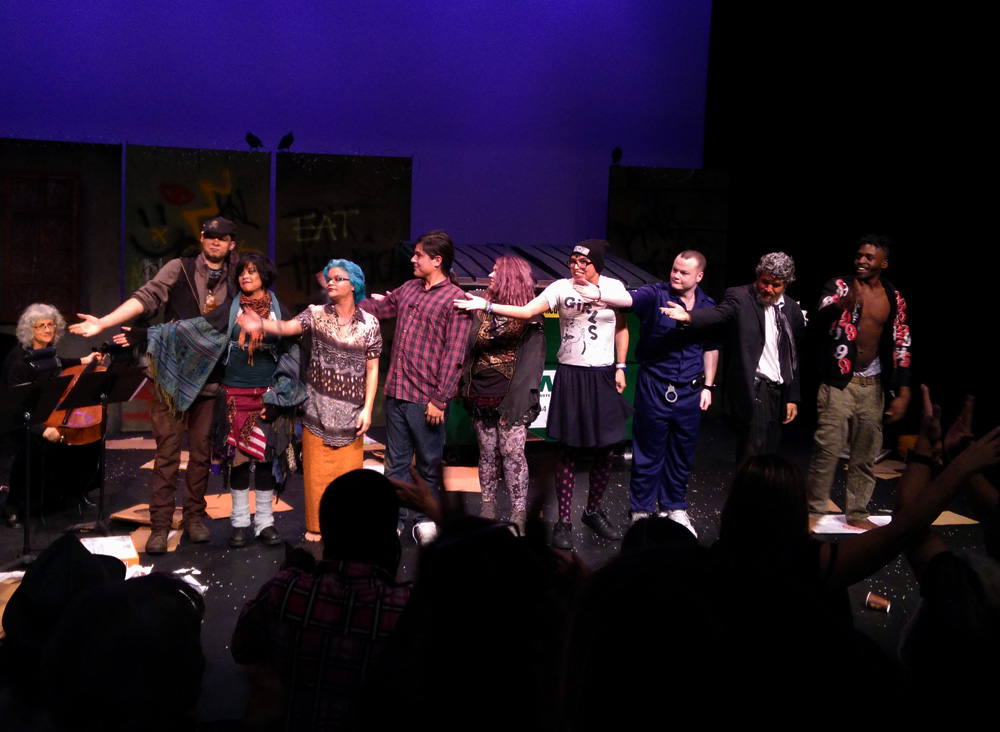 My name is Neil Weisensel. I’m the composer in residence and orchestral arranger for Death in a Dumpster.

Why did you decide to join this production?

I’ve done a lot of work in the Downtown Eastside with the Vancouver Moving Theatre and they’re kind of my mentors, Terry Hunter and Savannah Walling. I did a lot of work with them with melding community and professional artists and found that to be interesting to me.

So when Elka Yarlowe, the executive producer and vocal coach of the production, sat down with me and explained how she had seen a show that I had written music for and really wanted me to work on this one. Within the first minute of her telling me about it I was like yes, I’m going to do it.

On it for sure, yup! As an artist you’re always looking for meaning, and what could possibly be more meaningful than doing something like this? It has just been a huge gift.

Could you tell us more about your role within the production?

Well [the youth] all contributed to the script and to writing lyrics for all of the songs. Colin Andrew Ford, the creative direction of the production, was the one who wrote most of the song material. Then we worked together to really refine the melodic material.

I had a few ideas of how to structure the songs, to expand them, and just brought my own musical experience into the mix; it was a really great collaboration. Then we kind of decided together, well it was all driven by the youth, that we wanted to have strings in the show as well.

Did the youth that were involved in the development of the show have any prior experience writing plays or performing on stage?

None, I would say. Maybe Dakota who played the lead had been on stage before, but no, they didn’t have any stage experience.

No. Writing poetry though, a lot of them have written before. You know the script was 80% theirs which they brought from their own experiences. So it was very collaborative.

Why, in your opinion, is Death In A Dumpster so important?

Housing is such an issue. Even for people who aren’t homeless, trying to find a proper place to live in this city is tough. There’s just such a huge disparity between the wealthiest and the poorest and these are the poorest that we’re seeing on stage here.

Is there anything else you want to say or what are you working on next?

I wrote an opera called Stickboy that was done by Vancouver Opera last year and so interestingly enough, it has a theme of bullying so it also has a social element to it. So now, Vancouver Opera is producing a school tour version of that show and it’s going to be touring around BC starting in January. So that’s the next thing that’s coming up for me.

Other then that, just that about this project, it was an amazing gift to be able to work with these young people and to see their courage and their fortitude. At any point they could have a crisis during their day that would sideline any professional performer, but they somehow come back from whatever adversary it may be and still do the work that needs to be done and that’s enormous.