Last Spring in Vancouver, the birds were chirping, the flowers were blooming, and Deadpool was chopping up bad guys into pieces.

The upcoming big screen adaptation of Marvel’s “Merc with a Mouth” has attracted plenty of attention ahead of its release on February 12, especially here in Vancouver. After all the film’s leading man, Ryan Reynolds, is a local, and much of the film was also shot right here in the city too. So in celebration of Deadpool‘s release, we’ve complied a list of some of the Vancouver locations you might spot in the movie. 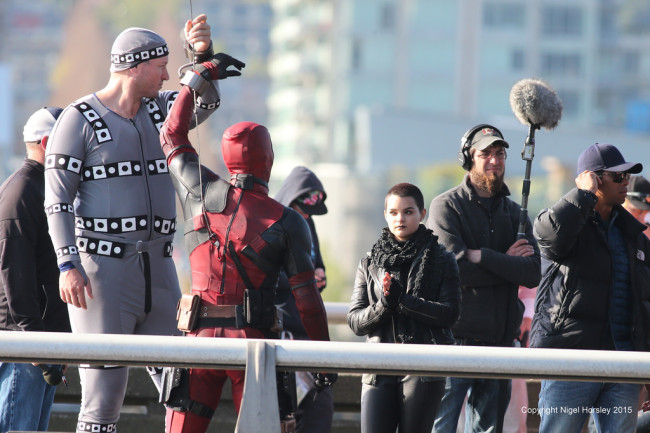 Obviously this is the first place we have to mention. Anytime you close a major thoroughfare like the Georgia Street viaduct for two weeks, it’s going to get some attention.

This was also the location where some people got a first hand look of Andre Tricoteux as Colossus, and Brianna Hildebrand as Negasonic Teenage Warhead on set. But everyone wanted to see the man in the red and black cause havoc with guns and swords.

Filming on the Georgia viaduct wrapped up around April 17, 2015 and is now considered a holy site or Mecca that cannot be torn down by many Marvel fans. 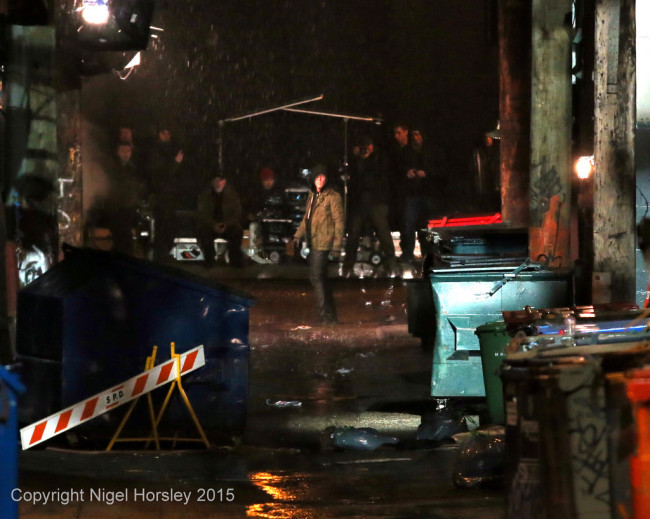 The famous Vancouver alleyway (South of Hastings, west of Abbott) has been in a variety of film and television shows over the years. However, last year, it was fully christened by Wade Wilson. Production set up huge rain towers and shot scenes at night around April 1, 2015. The production came back to this location for re-shoots last fall. 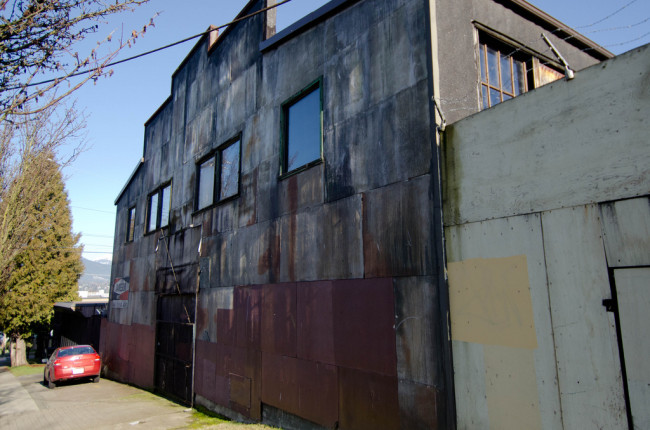 Unfortunately all we have now are pictures as the old rundown manufacturing plant has been torn down. But the iconic dilapidated structure on Franklin street will live on forever in film and television projects. The Deadpool production team spent more time at Iron Works than any other set in and around Vancouver. They came in March for filming and came back in May for some re-shoots. Deadpool was the last film that was shot at this location. 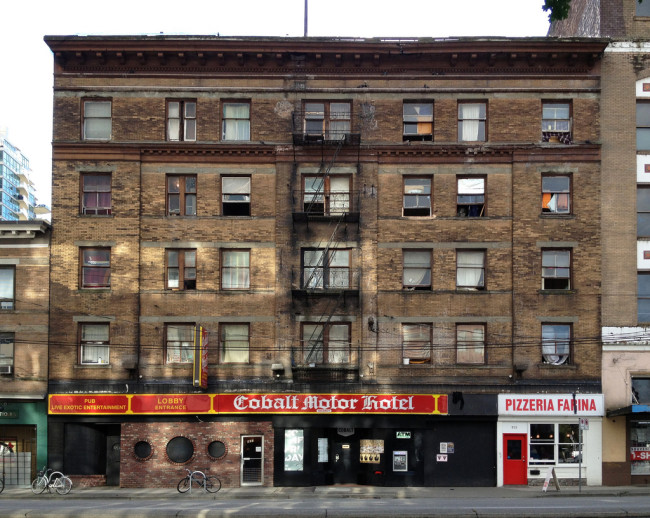 Deadpool production trucks were seen parked near Science World, as filming took place in and around the Cobalt Hotel on Main Street. Just like the previous sets for the film, dark and dingy was the name of the game. It was used as the exterior shot of a strip club where Wade Wilson’s ex-girlfriend works as a waitress in the movie. The Cobalt was the last location the production shot before wrapping re-shoots up last fall. 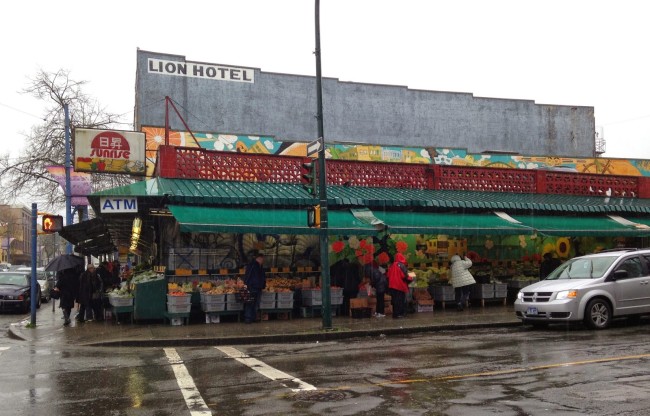 Reynolds was also seen in and around Vancouver’s Chinatown filming some exterior shots in the rain. In the film eagle-eyed viewers will be able to spot some scenes where a disfigured Wade Wilson is walking around Keefer Street and Gore Avenue. You can even see a clear shot of The Sunrise Market on Powell Street, as the producers didn’t make any effort to disguise any of the shops nearby. 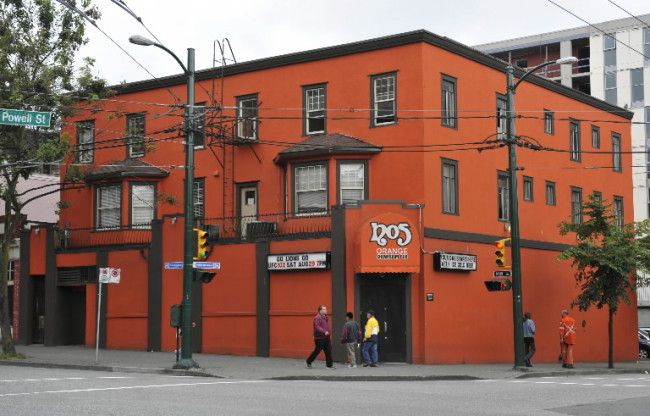 While The Cobalt was used as the exterior of the strip club featured in Deadpool, the Orange was used for interior shots. There were sightings of T.J. Miller as “Weasel” in and around the club and there were also body doubles of both Reynolds and Miller being filmed walking in and out of the club. According to many sources, Stan Lee was also seen on set and was probably filming his standard Marvel movie cameo. The No. 5 Orange logo also makes an appearance in the film’s opening credit scene. 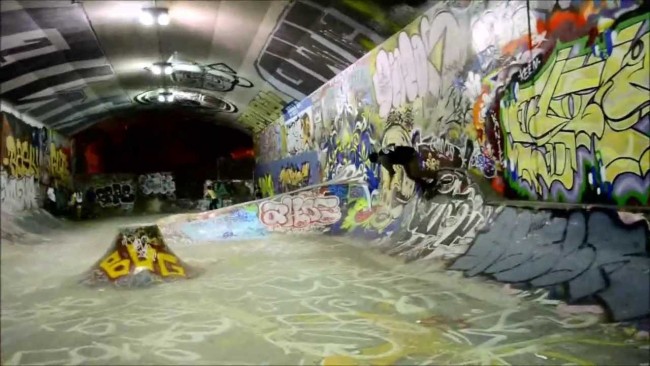 The Deadpool production team spent time on the PNE Grounds back in May. They were spotted filming scenes in and around Leeside Tunnel skatepark. Later on filming continued at PNE’s Rollerland, which is currently open studio space since its closure. No word if maybe Deadpool started laying down some gnarly tricks on a board.

There were some large-scale scenes that were shot in a junk yard under the Pattullo Bridge in Surrey. So the continuation of using dirty and grungy areas of town continued. They returned for some re-shoots last November. Not much information on what was actually shot there, but apparently Reynolds and other actors were spotted on set.

There are a bunch of scenes where you can see the Pattullo Bridge, including the people who were in bumper to bumper traffic because they were trying to avoid the Port Mann Bridge tolls.

So this Friday while you’re munching down on popcorn and watching Deadpool kick ass, see if you can pick out the locations.

Deadpool is rated R and opens everywhere this Friday at a theatre near you.